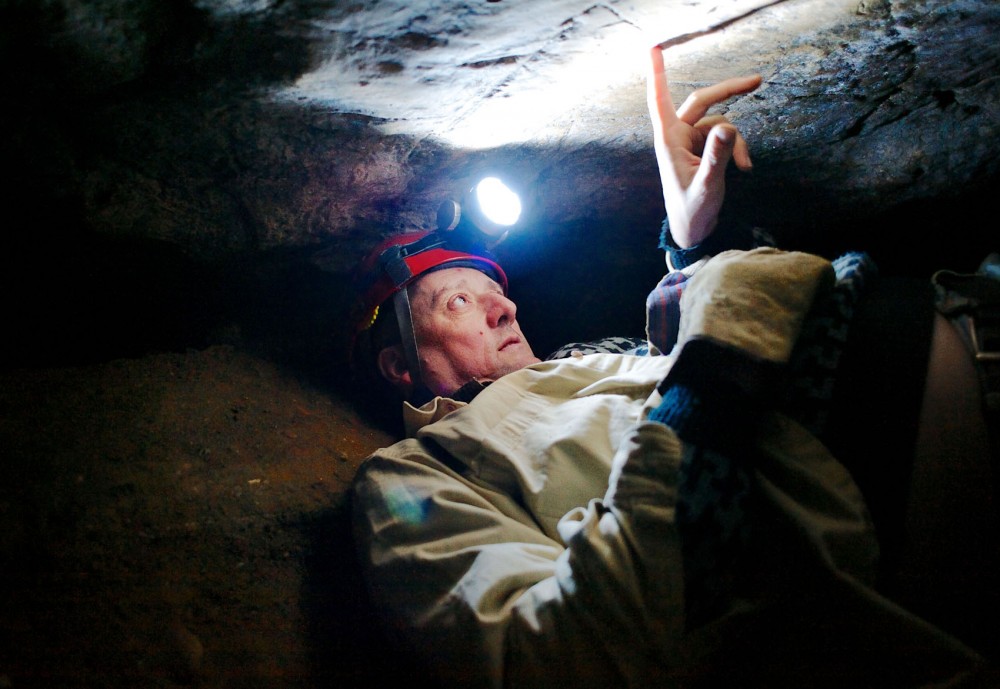 University of Minnesota researcher Greg Brick examines the roof of Miles Cave on Monday, Feb. 4, 2013, beneath Hastings, Minn. Brick has been exploring caves for his research since 2004.

HASTINGS, Minn. — Greg Brick coughed years of cave dust from his lungs, his breath condensing in the cold winter morning.

He crawled as deep into the cave as he could, inching forward on his stomach, using his forearms to pull himself farther along the dusty cave floor.

When the cave ceiling dipped too low to continue, Brick rolled over onto his back and lounged on the bedrock.

“It gets so tight,” Brick said, “you have to crawl through their ribcages.”

The University of Minnesota researcher was the first to rediscover caves French explorers abandoned in the 1700s. He began exploring and categorizing the caves near Lake Pepin in 2004 and is defending his doctoral thesis on the research this semester.

The French explorers, including Pierre-Charles Le Sueur, mined the caves for saltpeter, the main ingredient in gunpowder until World War I.

Historians have unearthed the remains of caves containing saltpeter in the southern parts of the U.S., but they never made it this far north. And the explorers never mapped the saltpeter caves in Minnesota.

So Brick had to sift through Le Sueur’s notes and journals describing the area to find and map the caves himself.

The U.S. imported gunpowder from Britain in the 1700s. But during the Revolutionary War, Americans had to find saltpeter and make their own gunpowder.

Similarly, during the Civil War, the Confederate Army couldn’t import gunpowder because of the Union’s blockade.

When the soldiers mined the caves for saltpeter, they kept records of where they were, which historians later traced back.

Brick said it took about 200 pounds of sediment to make 3 to 5 pounds of saltpeter.

The conventional wisdom, he said, was that saltpeter caves didn’t exist in Minnesota.

Calvin Alexander, his adviser and a University geology professor, said Brick’s unique way of using history to inform science allowed him to discover what many historians thought didn’t exist.

Alexander has known Brick since he was an undergraduate at the University in the 1980s, when Brick’s interest in caves began.

When Brick decided to pursue his doctorate, Alexander said he thought it was a great idea to find if there was saltpeter in Minnesota’s caves like Le Sueur described.

So Brick went out and investigated, bringing samples back in one-gallon freezer bags for Alexander to test in a lab at the University.

They then put their findings into computer models, confirming their predictions that the caves contained saltpeter.

Until researchers can sit down and reproduce what they observe in nature, Alexander said, they don’t really understand it.

When Brick first arrived at Frontenac State Park, they told him they didn’t have caves.

Park Manager Harry Roberts said he had never come across such caves in his 26 years working at the park.

The caves Le Sueur described in his journals were long and narrowly cut into the bluff, making them difficult to see until Brick was right in front of them.

Brick calls them “maze caves” because they have so many passages to explore.

Roberts said the public should not explore the caves at Frontenac because they’re located in protected areas that aren’t easy or safe to get to.

“My fear would be in this case is if [we made] these open and readily available to the public, there’d be a lot of resource damage,” he said.

On Monday morning, the Hastings, Minn., cave Brick was spelunking was not one that Le Sueur described. But it was one of the 100 or so caves where Brick found saltpeter.

He picked up a handful of the dry, reddish sediment, letting it sift through his fingers.

“I can tell right away, even before I get to the lab, that this will be high in nitrates,” Brick said.

The smell filling the cave was “the musty stench of raccoon scat,” he said, which is a major ingredient in the nitrates that make up saltpeter in Minnesota.

Exiting through a different route, Brick sat for a moment to look at the gurgling, frozen river below.