The eight student representatives to the Board of Regents presented top areas of concern Friday. 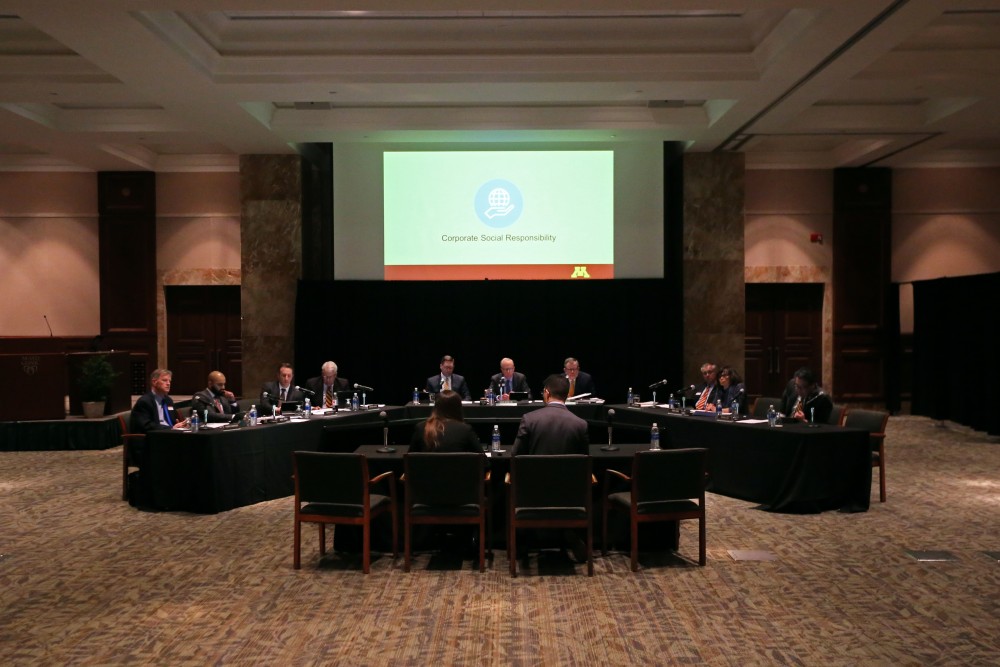 The Board of Regents listen to a report from student representatives on Friday, March 23 at the Siebens Building in Rochester.

University of Minnesota students presented top student concerns, including diversity efforts and student information privacy, during an annual report to the Board of Regents Friday.

The eight undergraduate and graduate student representatives to the Board of Regents, who come from each University campus, identified four primary areas of concern they want the regents to address.

The representatives selected the topics by collaborating with student leaders, analyzing surveys, listening to students and compiling research about potential topics, said Mina Kian, a student representative to the Board of Regents and MSA vice president elect for the upcoming school year.

Although the representatives don’t have voting powers on the board, Chair of the Student Representatives to the Board of Regents Joshua Preston said their role is to humanize students when regents make decisions.

“Having a seat at the table — that’s our power,” he said.

This year’s report focused on increasing diversity and inclusion efforts — which is a common theme among past reports — as well as disability services University-wide.

There’s a “disparity” in disability services on the coordinate campuses compared to the Twin Cities campus, Preston said.

“For all the gains that have been made on mental health services, disability services … [we have] a long way to go,” he said.

The report also focuses on student information — like addresses, phone numbers and majors — available to the public through the University’s website or by request.

Preston said although he understands the benefits of having this information public — like future employers being able to check a student’s status — he believes many students don’t know this information is available.

“I would argue that if more people knew about it or if this was easier to do, they might choose to suppress more information,” he said.

Inconsistencies in credit transfers between University campuses present a problem for students on coordinate campuses who want to transfer, Preston said.

Some students on coordinate campuses plan to transfer after their first year, he said, and expect their credits to easily move with them.

The report recommends cross-campus communication between similar departments as a possible solution.

Preston said at the meeting that while the board has recently focused on raising conduct expectations for students and student groups, other University stakeholders, like suppliers, should be governed by a system-wide supplier code of conduct.

“I think for a lot of students, when they come to a university, and they know money is being spent in their name, in their interest and for their benefit, they want those purchases to reflect their values,” he said at the meeting.

Past student representative presentations on topics like student mental health resources have influenced the board’s work, Regent Richard Beeson said at the meeting.

“Work like this does have an impact, and I’m glad to see … you [have] specific recommendations,” Beeson said at the meeting.

“I’m hopeful that due to the thoroughness of this report … that [the regents] would actually choose to move forward and implement all of our suggestions,” she said.