Ticket scamming on the rise 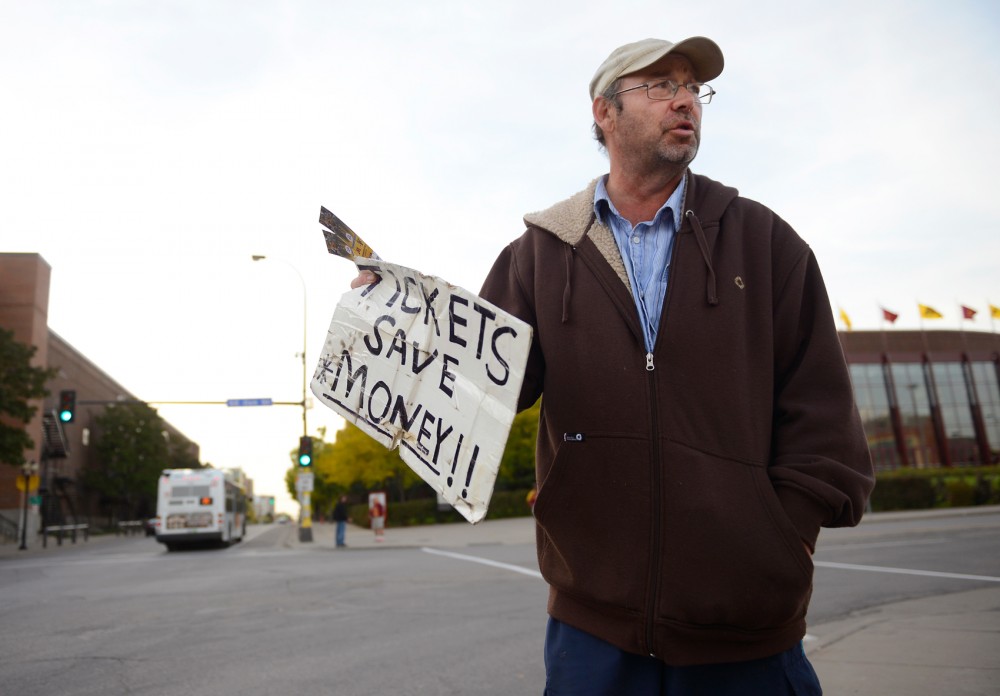 Ticket scalper Dan Waage stands outside of Mariucci Arena offering tickets for sale to the Men's Hockey 2015 Hall of Fame Game on Saturday. "Do you know what we do if we catch people selling fake tickets? We hold them down until the cops come," said Waage, a 36-year veteran of ticket scalping.

by Rilyn Eischens
Better technology is making it easier than ever for scammers to design, print and sell fake tickets for sporting events in the Twin Cities.
Cheaper and clearer printing has led to an overall increase in reports of fake ticket sales in recent years, but officials say there are ways the public can avoid being scammed.
Out of the two Vikings games at the University of Minnesota’s TCF Bank Stadium this season, three people reported a theft by swindle, or a ticket sale scam, according to crime reports.
All three occurred during the Sept. 20 game.
But Minneapolis Police Public Information Officer John Elder said that number doesn’t include many unreported crimes.
Dan Hendrickson, spokesperson for the Better Business Bureau of Minnesota and North Dakota, said the problem has grown in recent years, in part because of better technology.
“Every professional sports team in town has probably run into this problem,” Hendrickson said. “Where it used to be kind of isolated — the first game or the big game — now I think it’s probably every game.”
As printers become cheaper, he said, it is easier for scammers to print fake tickets that look authentic.
Hendrickson said social media makes it easier for scammers to design authentic-looking tickets.
“With people posting pictures of tickets on social media, there’s a lot of examples … online that … scammers can look and model their tickets after,” he said.
And an increase in e-ticket sales has made copying authentic-looking tickets easier for scammers, Elder said.
“It makes it easier … because [most people] are just coming in with regular, standard sheets of paper,” he said. “It’s not any of the actual tickets.”
The more enthusiastic fans are about a team, the more motivation scammers have to make fake tickets, Hendrickson said, and selling tickets to desperate fans is a fast, easy and profitable business.
“There’s greater demand, and scammers realize that,” he said. “It’s often easy money for them. Too easy, unfortunately.”
Elder said Minneapolis police collect suspect information from victims — like scammers’ phone numbers — to track them down.
Lino Lakes resident Chris Erickson was a victim of a ticket scam at a Gophers football game at TCF Bank Stadium in 2014. He said he bought tickets from a third party online.
“I just, spur of the moment, decided to take my son to a Gophers game,” he said. “The first place I looked was Craigslist.”
Erickson said he wasn’t suspicious of the seller during the deal. He said the tickets looked legitimate, but when he and his son arrived at the stadium, one of the tickets didn’t work. According to a crime report, the seller purchased the tickets with a stolen credit card, but the payment didn’t go through.
Erickson did not receive compensation, and he said he doesn’t think police were able to find the scammer.
He said he’s more hesitant about buying tickets through a third party after the incident.
Hendrickson said there are ways for fans to make sure scalpers are honest.
“Ask the scalper to pose with a valid ID,” he said. “Have them let you take their picture. If they’re uncomfortable, it’s probably a sign.”
And Elder said if the scalper won’t approach the entrance gates, the ticket probably isn’t real.
Delete Image
Align Left
Align Center
Align Right
Align Left
Align Center
Delete Heading