Minnesota shot 50.8% from the field on Thursday. 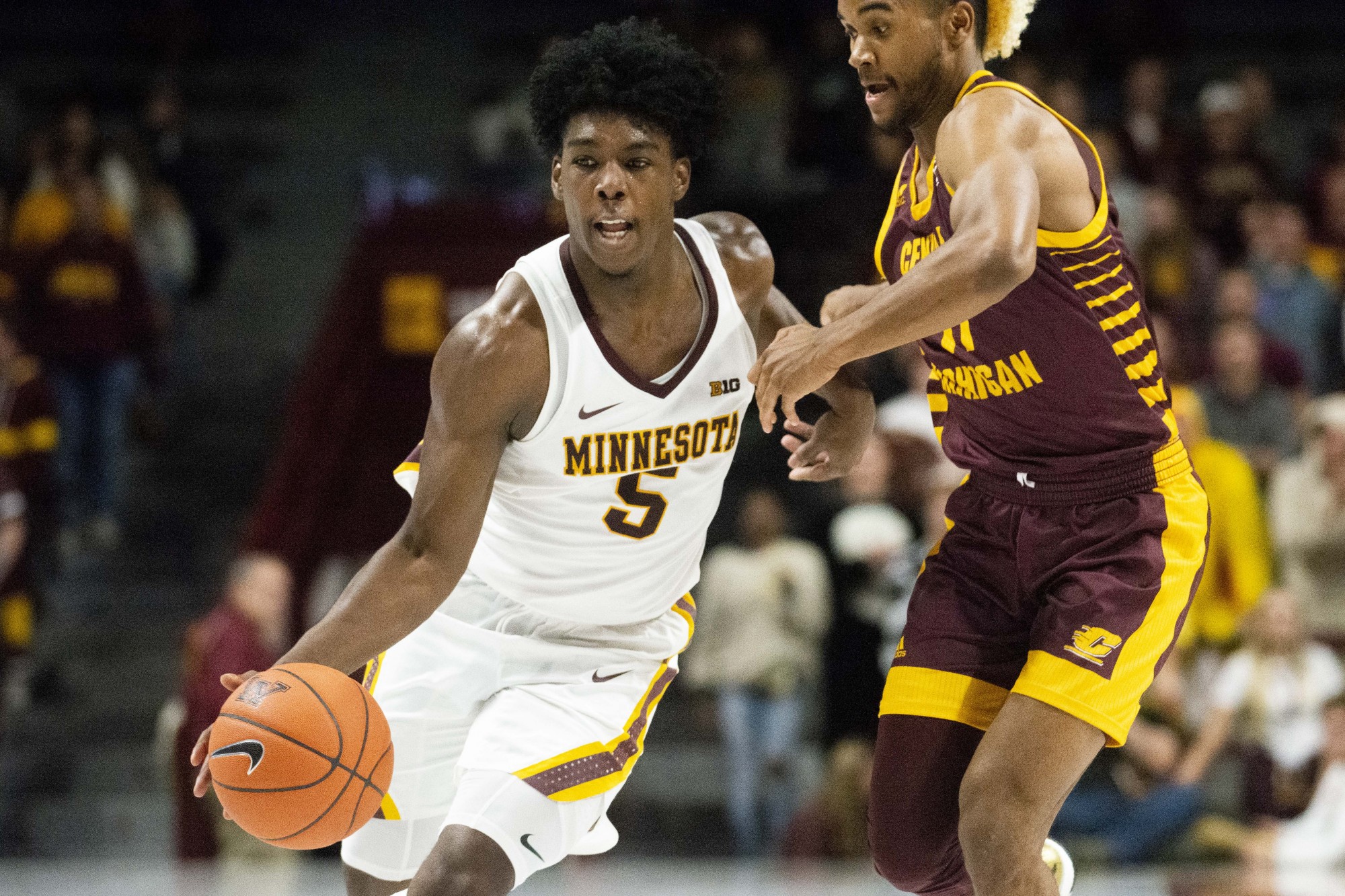 Guard Marcus Carr drives towards the hoop at Williams Arena on Thursday, Nov. 21.

Following a three-game losing streak, the Gophers returned to Williams Arena for the first time since Nov. 5 on Thursday to tip off a four-game homestand.

In front of the home fans, Minnesota (2-3) managed to find a rhythm on offense, handing Central Michigan (4-1) its first defeat of the season by a score of 82-57. The Gophers’ offensive outburst came thanks to making 32-63 (.508) field goals on the night, including 14 3-point shots.

“I thought it was a great step in the right direction,” head coach Richard Pitino said. “It felt great to be home in front of our fans. I think it’s good to get the guys offensive confidence going as well as the defensive confidence.”

After Minnesota scored the game’s first seven points, Central Michigan fought back to level the score at 9-9. That’s when the Gophers found their touch from behind the arc, making three 3-point shots in less than two minutes.

Central Michigan hung around in the first half until Minnesota managed to turn a pair of stand-out defensive plays into offense. Redshirt junior Payton Willis jumped into a passing lane to come up with a steal that became a breakaway dunk. Soon after, sophomore Daniel Oturu stuffed a Chippewa layup at the rim, leading to a three from freshman Tre’ Williams at the other end.

“I think where we struggled on the road a lot was getting into that transition,” sophomore Jarvis Omersa said. “Being able to do that helped us out a lot. I think we scored a lot of our points through transition.”

That sequence sparked a 15-0 run which put the Gophers ahead 38-20 with 4:30 remaining before intermission. Strong back court play led to a 19-point Minnesota lead at halftime. In the opening period, the Gophers’ guards combined to make 8-15 3-point shots and score 37 points.

“I think we did did a good job of taking what they gave us,” redshirt sophomore Marcus Carr said. “We talked about having a disciplined attack, trying to attack the press and the pressure but still taking disciplined shots.”

Improved outside shooting was the key to Minnesota’s success on Thursday night. After going 26-88 on 3-point shot attempts over their past three games away from The Barn, The Gophers managed to recapture the same stroke they had in their season-opening victory over Cleveland State, in which they made 13-29 shots from behind the arc.

“We are all very aware of our ability to shoot the ball,” Carr said. “Due to they way they play defense and their press we were just able to get a lot of open shots.”

To start the second half, Minnesota came out attacking, scoring the first 10 points, only for Central Michigan to respond with a 12-0 run of their own. However, 11 Minnesota points over a 2:31 stretch quelled the Chippewas’ run, allowing the Gophers to cruise to victory over the final 10 minutes.

Minnesota’s defense was also impressive, slowing down a Central Michigan team that averaged 108.8 points per game entering the contest. The Chippewas committed 13 turnovers compared to nine assists, despite previously leading the nation with a 2.24 assist to turnover ratio.

Willis, sophomore Gabe Kalscheur and Carr all had efficient scoring performances. Carr finished with a game-high 19 points and seven assists while Willis was not far behind with 18 points of his own. Kalscheur made five threes to total 15 points. He also had two steals on defense. Oturu ended one point shy of his fourth double-double of the season, accumulating nine points and 12 rebounds in 26 minutes.

“They want to play fast,” Pitino said of Central Michigan. “So it was very important to take what they gave us but be disciplined with our attack. I thought you saw that.”

The Gophers will look to start a winning streak when they return to action on Sunday, hosting North Dakota.