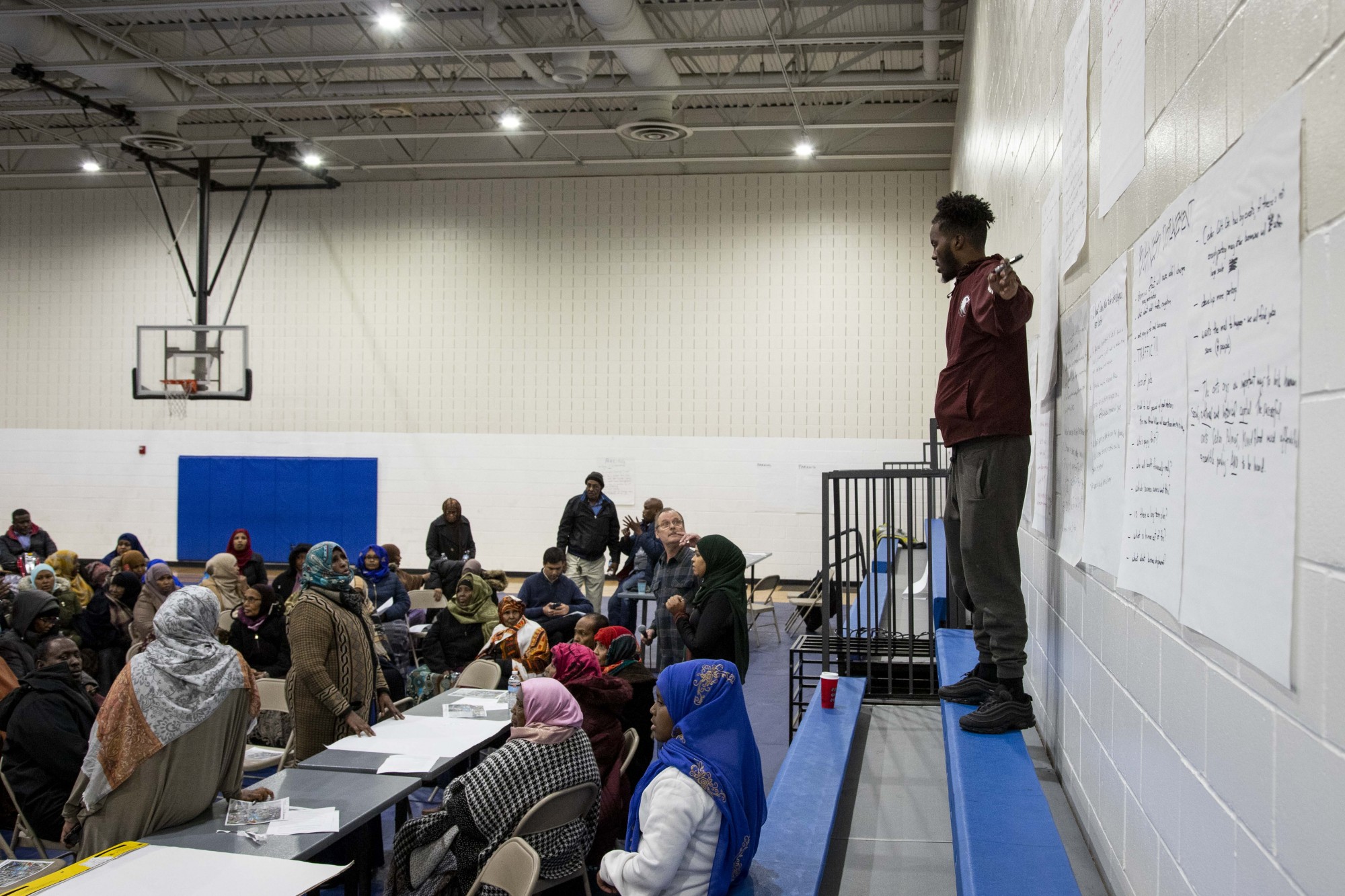 Mohamed Salad, a student at Augsburg University who sits on the board of the Neighborhood Revitalization Program, hosts a listening session regarding the city’s Africa Village public marketplace on Thursday, Nov. 21.

The Cedar-Riverside community is weighing the effects of the proposed Africa Village public market in their neighborhood in an attempt to take control of the input process.

Citing a lack of community engagement on the part of the City of Minneapolis, members of the Cedar-Riverside Neighborhood Revitalization Program and West Bank Business Association held a listening session to gather input from residents on the project Thursday. Community members voiced concerns about the mixed-use project, including its possible effects on businesses and public safety.

Organizers divided the Brain Coyle Center’s gym into four areas, each designated with a specific concern: parking, traffic and safety, best uses, and business displacement. The corner representing traffic and safety concerns had the most residents by the end of the event.

The event comes after an Aug. 30 listening session held by city officials was cut short by protesters. Some community members have criticized the city for failing to engage residents of the neighborhood while putting too much stock in nonresidents’ support of the market.

NRP members signed in residents at the entrance to Thursday’s meeting to ensure the listening session encompassed only the views of community members. The session ended with NRP members taking questions from residents.

The project, proposed to be built on a city-owned lot in the area, was announced nearly six months ago, and the city issued a request for proposals from developers on Nov. 1. But Cedar-Riverside resident and community activist Burhan Israfael said the community still feels ignored by the city.

“It was never really a democratic process where people are given the option for them to really be a part of the whole process and have genuine input,” Israfael said. “That was never the case.”

Mursal Jama, who’s lived in the neighborhood for 25 years, said he supports the development. The opposition to the project seems to be coming from those who have more of a financial stake in the area, he said.

Ward 6 City Council member Abdi Warsame said the community’s lack of familiarity with the city’s development process may be the cause of some confusion or dissent. While some may oppose the public market, he said there is significant support too, citing a Sept. 27 petition supporting the market of more than 1,000 names of residents.

Warsame noted the project has evolved since it was first announced to include residents’ asks. With a developer set to be chosen early next year, Warsame said there will be more opportunities for community members to comment on the project before anything is built.

“As it becomes clearer [and] it comes to the Council, as we have more discussions and as the cooperative and public market aspects come out, this is going to be the big step … that we’ve been waiting for all this time,” he said.