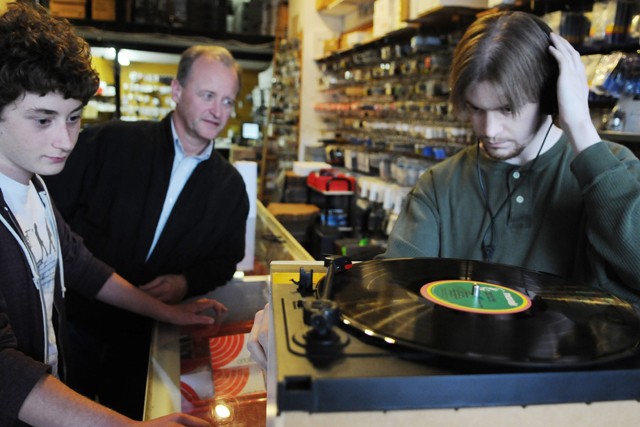 Osseo High School junior Jordan Limmer, left, waits along with his father, Warren Limmer, center, as Needle Doctor employee Matthew Randall checks the speed of their turntable Friday at the store. The Warrens made the drive from Maple Grove to the Dinkytown for the visit.

After 30 years in Dinkytown, Jerry Raskin’s Needle Doctor is packing up Friday to move to a bigger location in St. Louis Park.
With only a small storage space and more than 90 percent of its sales coming online, manager Ken Bowers said it was time to move on.
“I’m definitely going to miss Dinkytown. There’s a really good energy here,” Bowers said. “It just doesn’t make sense for us to be here financially.”
Located on 14th Avenue Southeast and 4th Street Southeast, the Needle Doctor has the “world’s largest selection” of turntable equipment, according to the shop.
“Everybody knew Jerry [Raskin],” said Skott Johnson, president of the Dinkytown Business Association. “I’m sure Jerry has a special place in his heart for Dinkytown.”
Starting in 1979, Raskin began the Needle Doctor, selling blank cassette tapes out of his backpack. From there, he sold audio equipment out of his car until opening a store in the Dinkydome, employee Jim Frickle said.
Around the time the store moved to its current location, competition from neighboring record stores started to heat up, leading to the Needle Doctor’s efforts online.
“When Best Buy came along, Needle Doctor hit some hard times, but then the new railroad came through town,” employee Bradley Gausman said, referring to Raskin’s metaphor for the internet.
Raskin declined to comment for this story.
“[Raskin] managed to find a niche online that wasn’t being served by the big box stores that were taking over,” Gausman added. “You don’t need a store in every town. You just need one to mail to [customers], so that’s us.”
Waiting on assistance for her broken record player, Ellen French scanned the store looking at the little parts and equipment along the walls.
“I’ve been coming here since the 70s,” she yelled to nobody in particular.
“Where’s Jerry?” she shouted, laughing.
Having lived in the area since 1968, French said she knew Dinkytown well and graduated from Marshall University High School, now the U-Tech Building, in 1983.
“There would be Burger King across the street, Bridgeman’s on the corner, Gray’s Drug Store, Gordon’s Bakery, the dental office,” French said, naming past Dinkytown businesses. “They’re probably not smoking pot on the streets anymore [either].”
Speaking about the Needle Doctor, French continued, “It’s nice to get what you need in your neighborhood.”
Bowers returned to French with a new part and receipt.
“We could really be anywhere, but I wonder if some of the vibe [in Dinkytown] — what vibe is actually left — will be gone by moving to St. Louis Park,” Bowers said.
During the 1960s and 1970s Dinkytown was, for the most part, all locally owned, “ma and pa” stores, Johnson said.
“Dinkytown was very upbeat and happy. People would come from all over the Twin Cities to shop here because you found things you wouldn’t find anywhere else,” Johnson said.
“You could find students sitting on sidewalks selling beaded jewelry, and there were always musicians on the sidewalks playing.”
Today, there wouldn’t be any protests if a big chain wanted to move in, Johnson said. “But that’s probably more of the culture with the students … It probably wouldn’t affect them as much,” Johnson said.
Now Dinkytown is mostly students passing though, Bowers said.
“It’s not a shopping destination. I mean, to come here is one thing, but there’s not really anything to buy around here. The bookstores are nice, but even the bookstores are hurting,” Bowers said. “It’s just not a ton of retail. It’s pretty generic and it will become even more generic now.”