Minnesota gave up four goals in the second period Sunday and lost 5-4. 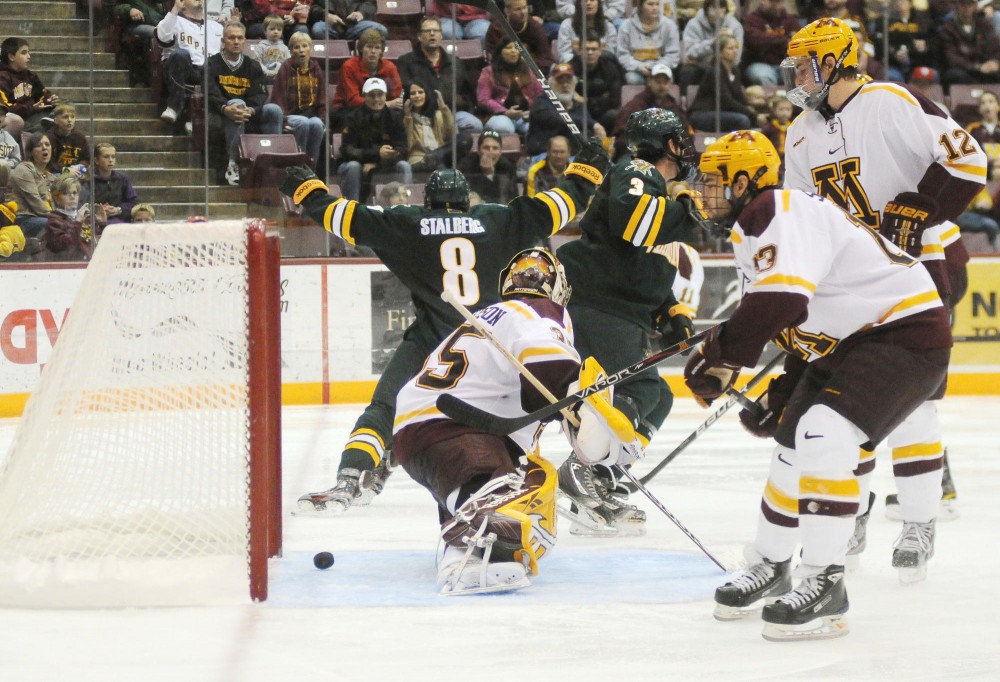 Vermont's Sebastian Stalberg scores the Catamounts fifth goal in Sunday's game against Minnesota. The Gophers recorded their first loss this season versus UVM, 5-4.

Vermont took the second game of the weekend series at Mariucci Arena.

The Gophers couldnâÄôt match their fast start from Friday night when they scored 44 seconds into the game.

Vermont came out with more intensity and goaltender Rob Madore seemed back on his game after allowing five goals on 19 shots in FridayâÄôs matchup en route to a 5-4 victory.

No. 8 Minnesota (5-1-0, 2-0-0 WCHA) jumped out to an early lead in the first period when Justin Holl fired a shot from the point that found the net. It was HollâÄôs first goal of the season.

Even when trailing by one, the Catamounts generated a myriad of scoring opportunities in the first period and Kent Patterson was up to the challenge.

The second period was a different story.

The Gophers responded 12 seconds later with a  goal of their own when Jake Hansen deflected an Erik Haula centering pass top shelf.

After a series of penalties by both teams and with tempers starting to flair, Brickley and Chris McCarthy scored within 37 seconds of each other for Vermont to tie the game.

Sebastian Stalberg added another power play goal for the Catamounts with two minutes left in the second to give Vermont its first lead of the series and cap a four-goal second period.

Stalberg scored again 7:07 into the third period to stretch the lead to two.

Kyle Rau gave the Gophers hope when he added a power play goal to cut the deficit to one at 10:07.

Rau fired a shot on goal and cleaned up the rebound in front of the crease.

The Gophers pulled Patterson with a minute left, but never produced a realistic scoring opportunity with the extra attacker.

Minnesota went 2-for-4 with the man advantage on Sunday, but took 11 penalties of its own.

The Gophers will travel to Alaska next weekend for a WCHA matchup with Alaska Anchorage.