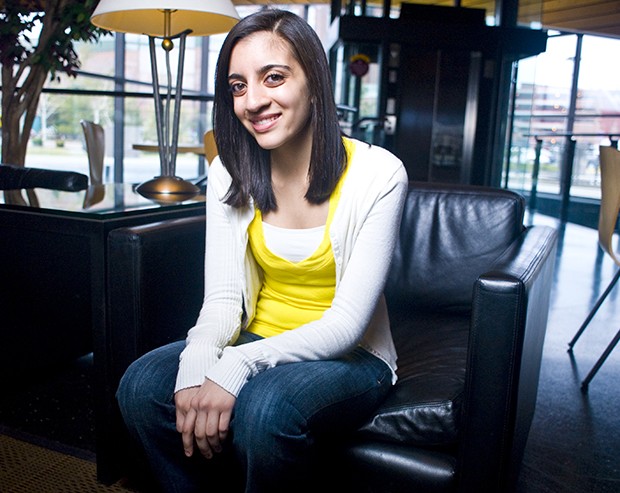 Genetics and cell biology sophomore Sanyu Janardan attends the Survivor Series conference on Saturday at the McNamara Alumni Center. Sanyu was diagnosed with Hodgkin’s lymphoma during her junior year of high school.

When Tonia Nickolaus received radiation and chemotherapy at the University of Minnesota when she was 9, the treatments were dramatically harsher and more damaging than protocols used today. But 28 years ago, when Nickolaus was diagnosed with acute lymphoblastic leukemia , a type of blood cancer that causes the body to overproduce white blood cells, survivorship rates of childhood cancer were much lower âÄî around 20 percent âÄî so doctors had no idea what kind of later-life effects her treatment would cause, she said. They couldnâÄôt know the radiation to her brain would cause skin cancer. They couldnâÄôt know the chemo and radiation to her chest would cause congestive heart failure, resulting in three major open heart surgeries. Now a mother of two, Nickolaus says survivorship has taken on a whole new meaning. âÄúItâÄôs not just the fight for myself, but itâÄôs the fight that I have to be here for them,âÄù she said. âÄúWhen I found out I had heart disease, it was like, OK, it maybe wouldnâÄôt have been so bad if I didnâÄôt have my girls, but now I have them, and I have to take care of them.âÄù Nickolaus was just one of nearly 200 cancer survivors, their families and physicians, who gathered Saturday to attend a series of lectures on some of the long-term physical and psychological issues associated with cancer survivorship. The Masonic Cancer Center , housed within the University of MinnesotaâÄôs Academic Health Center, brought speakers ranging from primary care physicians to lawyers, to educate the survivors on resources and potential issues down the line. Drs. Daniel Mulrooney and Joseph Neglia , both pediatric oncologists, specialize in treating and researching survivorship of childhood cancers, such as leukemia, brain tumors and lymphomas. âÄúThe purpose of the conference is really to bring most of what weâÄôve learned here at the University of Minnesota in cancer and cancer survivorship back to survivors,âÄù said Mulrooney. Both work in the Masonic Cancer ClinicâÄôs Long-Term Follow-Up Clinic , which specializes in treating cancer survivors. Survivorship rates have shot up since Nickolaus received her treatment back in 1981, and the most recent numbers indicate about 80 percent of children diagnosed with cancer before age 19 will survive , Neglia said. âÄúThese patients, for the most part, grow up and function very well,âÄù he said. âÄúThey get jobs, they are back in school. By most standards this is a real success story.âÄù But âÄúcuringâÄù cancer isnâÄôt the end of the story for many patients. The later effects range from the more serious, such as NickolausâÄô cardiac condition, to smaller chronic conditions, such as weakness and fatigue. âÄúA lot of what we talk about really is not focusing on all the problems but focusing on, âÄòWhat are strategies to be healthy?âÄôâÄù Neglia said. Part of Neglia and MulrooneyâÄôs research is a major study of childhood cancer survivors, which compared their outcomes to the siblings of the cancer survivors. âÄúWe found them to report a higher risk of having a heart attack, having valvular disease, pericardial disease and having congestive heart failure,âÄù Mulrooney said of the 14,000 survivors studied. âÄúThe overall incidence was low, but the risk when you compare to other 20-30-year-olds, the risk is quite high.âÄù The Long-Term Follow-Up Clinic admits patients who are five years past their diagnosis, and continues to treat them the rest of their life, Mulrooney said. In addition to tracking which drugs and radiation therapies patients underwent, they also have a psychologist and social worker on-site, he said, âÄúto be comprehensive about their health care and the effects on their whole life.âÄù It was the effect the cancer had on her entire life that really surprised genetics and cell biology sophomore Sanyu Janardan when she was diagnosed with Hodgkins lymphoma, a cancer that causes the lymph nodes to multiply and become invasive toward other parts of the body , during her junior year of high school. When she first received her diagnosis, Janardan said she remembers thinking, âÄúMe?âÄù âÄúItâÄôs something you hear about, like your neighbor, or some famous celebrity or your friendâÄôs aunt, but you never think it would happen to you,âÄù she said. Although her initial treatments worked, and she was declared in remission just five months after her diagnosis, Janardan said there have been lasting effects on her health. âÄúIt took me a while to realize, cancer is a big part of my life,âÄù she said. âÄúBut it doesnâÄôt define me.âÄù Janardan remembers being known around her high school as âÄúthe girl with cancer,âÄù but said itâÄôs faded into the background a little more. âÄúNow itâÄôs more like, âÄòOh yeah, I have cancer, but I do karate, I do Indian dance.âÄô ItâÄôs like one more fact about me,âÄù she said, adding a positive effect the cancer has had is she now wants to be a pediatric oncologist. Both Nickolaus and Janardan said their experiences with cancer made them stronger âÄî strong enough to face whatever late-effects their bodies may undergo. âÄúI have this attitude like, âÄòI had cancer, I survived that,âÄô âÄù said Janardan. âÄúI can take on whatever other challenges.âÄù âÄîEmma L. Carew is a senior staff reporter