Winfield United, a Land O'Lakes subsidiary, gave the wind tunnel to the Department of Mechanical Engineering. 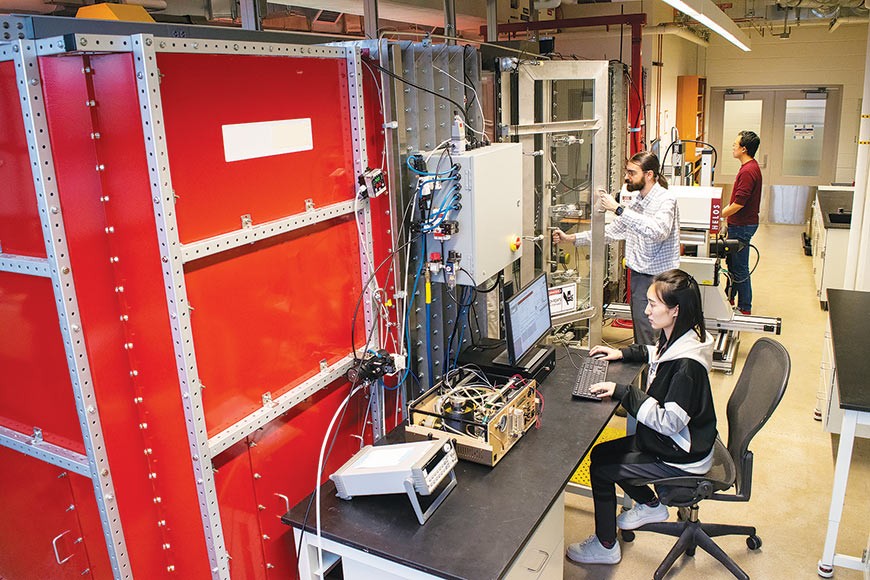 The University of Minnesota’s mechanical engineering department received a wind tunnel last month that will provide a new way to gain experience and learn new skills in agriculture research for undergraduate and graduate researchers.

The wind tunnel, donated by Land O’ Lakes subsidiary WinField United, allows aerosol researchers at the University to better understand the use of sprays in agricultural settings and minimize over-spraying in fields. The tunnel — which made its debut on Nov. 16 — is 23 feet long and can produce wind speeds of up to 12 miles per hour.

“These sprays in particular that we’re interested in are designed as crop protectants. That means that they’re typically sprayed on crops to enhance growth — and to be honest, to kill weeds in a lot of cases — and are a really necessary part of the food supply,” said Chris Hogan, a University professor and aerosol physics researcher.

The tunnel was first used by WinField at their Product Development Center in River Falls, Wisconsin until the opening of a new facility prompted the need for an upgraded tunnel, which then started their search for the existing tunnel’s new home.

WinField researcher Dan Bissell, a University alumus and former research assistant at the University, facilitated the donation of the tunnel to his alma mater.

“I thought that it would be best if we tried to do something different, and it seemed like a natural fit,” he said. “They could leverage it — use it kind of in a different way than what the industry has done before.”

Currently, the newly-gifted wind tunnel can be used by students for research, and may be integrated into academic coursework in the future. Undergraduate and graduate students are able to make use of the equipment, giving them the opportunity to explore a different discipline in engineering.

“[What] this tunnel allows us to do is really expose the undergraduate researchers … to a field that they may not think of when they are considering mechanical engineering,” said Steven Fredericks, a Ph.D. associate in the lab and main operator of the tunnel. “The application [of the tunnel] is in the agricultural field, which we don’t really deal with a whole lot.”

WinField will continue to work with the University beyond this initial gift, Hogan said.

“WinField sponsors a research agreement with my laboratory group and that research is designed toward understanding droplet transport in agricultural settings,” Hogan said. “Our end goal is to minimize usage and that’s their end goal as well — to actually make usage more efficient.”