Students take to Minecraft to cope with nostalgia for on-campus days. 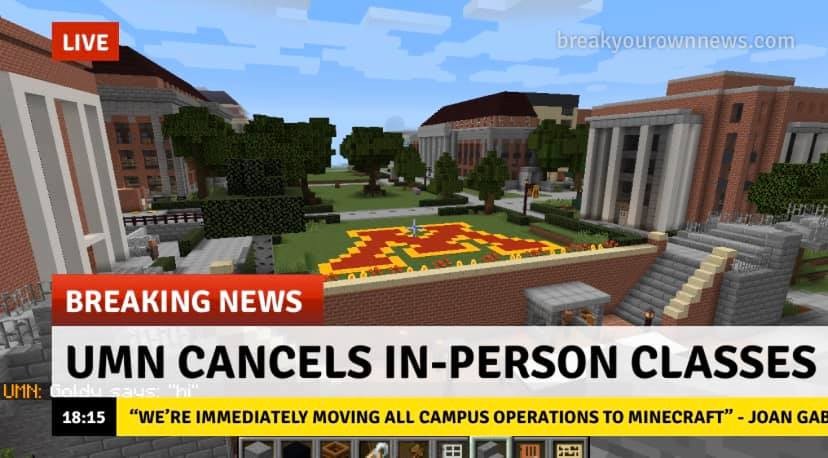 Even with campus life at a stand still, University of Minnesota students are finding creative ways to stay connected.

Halfway through the University’s spring break, President Gabel declared all in-person classes canceled for the remainder of the semester due to the COVID-19 pandemic. A few days later, a meme appeared on the timeline of the Facebook page “UMN Memes For Frozen Northern Teens.”

The meme was a screenshot of what looked like the Twin Cities East Bank campus, but built in Minecraft, the online game where players can build structures using colored bricks and other landscaping tools. The image had the text “BREAKING NEWS” and the fake quote, “‘We’re immediately moving all campus operations to Minecraft,’” attributed to President Gabel, imposed over it.

University of Minnesota student Mark Eckelaert posted the meme. He also shared that the server name was goldycraft.crafted.pro, so that other students could join and help continue building the virtual campus. Since the meme was first posted, the server has been booming with new users.

The “Goldycraft” server was first created last fall semester when some students from the “UMN Memes” Facebook group got together on a discord chat, an online group messaging forum for gamers, and joked about making the campus on Minecraft.

“We decided to ‘gopher’ it,” said Khang Lu, one of the server’s creators.

The crafters still communicate via the private Discord chat “umn memes.” Their goal is to make the online campus as realistic as they can.

Users have uploaded University building floor plans to the Discord chat to make building dimensions and rooms to scale and as accurate as possible. Just about every campus location is represented on the server, including local businesses like Sally’s Saloon and Haiku Bistro in Stadium Village.

“I didn’t really expect it to get this much attention, but I think that just shows how much people are looking for some distraction and comedy during all of this,” Eckelaert said.

“Everyone experiences the University in a different way, and that’s reflected through the world that they’re building together. Some of the students on [the server] have spent years walking through the buildings on campus, so they’re able to add those authentic details that you would’ve never noticed otherwise.”

Lu also never expected the server to gain as much support as it has.

“I owe it to everyone who started building on this server in the very beginning, whose names are all listed by the spawn point. They all made this become a reality,” he said.

Establishing a sense of normalcy amidst the COVID-19 pandemic was one of Eckelaert’s greatest motivators when he decided to share the meme.

“Obviously a lot of seniors are worried that they won’t get to experience a proper graduation, so I wanted to try and alleviate a bit of that stress,” he said.

“Goldycraft” has taken on a new meaning for students stuck at home, nostalgic for their campus. The server is public, so University of Minnesota students can relive campus life, even from afar.