While the school is an independent entity from the state, some feel the school needs limits. 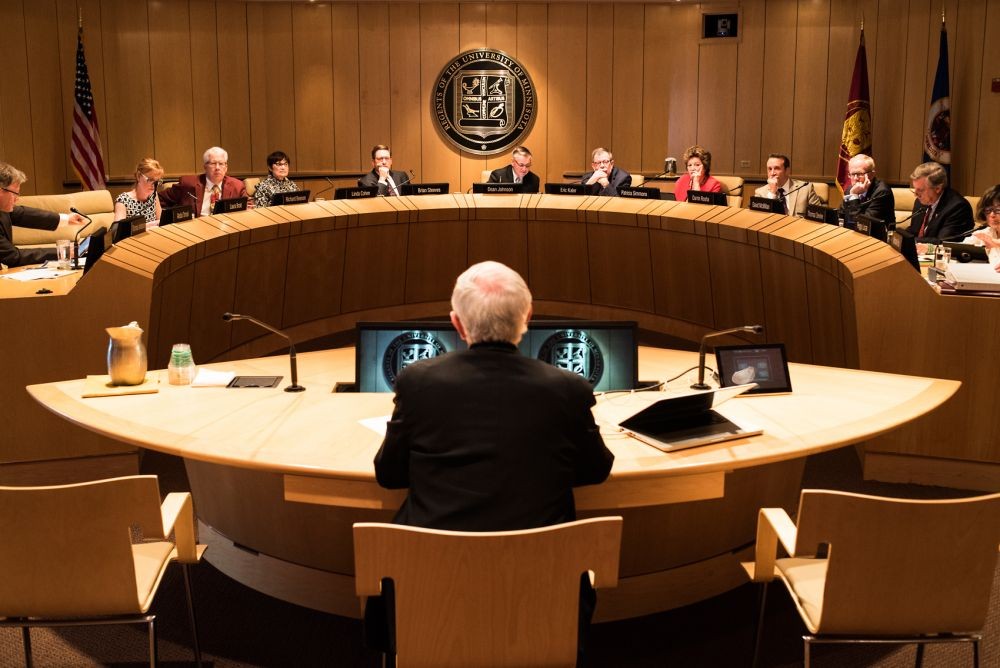 The Board of Regents talk at McNamara Alumni Center on June 10, 2016.

For over 15 years, outside groups have worried about the University of Minnesota’s hardline stance on its autonomy, and now a decision to demolish historic grain elevators has reignited that debate.

While University of Minnesota regents and administrators have heralded their constitutional independence from the state as vital to the school’s educational mission, some believe the University takes its independence too far.

“If you’ve ever faced it, particularly if it’s in an area where you’re representing constituents or community groups or local units of government, you’re well aware of it,” said Rep. Gene Pelowski, DFL-Winona and member of the House higher education committee.

Earlier this month, the University’s autonomy was questioned when the school decided to approve plans to demolish the Electric Steel Grain Elevators near TCF Bank Stadium, despite a request from Minnesota’s State Historic Preservation Office to delay demolition while it assessed the buildings’ historical significance.

“As a state entity, [the University] has to cooperate with other state agencies,” said Minneapolis attorney Erik Hansen. “But the U’s argument was that it has autonomy from the state and isn’t necessarily governed by city code.”

What is constitutional autonomy?

Constitutional autonomy — established in many cases when a university was founded before its state — makes the school a separate department of state government, instead of a state agency.

While state laws often supersede autonomous universities’ policies, those schools’ governing boards still have a significant amount of independent control over many university functions that the state cannot influence.

“It preserves the ability of the University to do its research and have the academic freedom that it’s got,” said Regent Thomas Devine.

For example, the University has its own police force, power plant, street lights and buildings. It also practices some of its own judicial processes, like the Student Conduct Code.

“The University of Minnesota sits like a self-contained island in the state of Minnesota,” Devine said.

While provisions of independence were set up to insulate university operations from political influences in the state Legislature and to promote academic freedom, some say the University’s autonomy is exercised too frequently.

“Anytime anyone tells them no, it’s, ‘Well, we have constitutional autonomy, and we can do it anyway,’” Pelowski said. “And whether or not it’s for the good of the community or the state or history, that’s really not the issue to the University.”

Increasingly, the University’s independence has been the subject of conflict, Pelowski said.

In 2002, the University argued that its process for finding a University president replacement following the resignation of Mark Yudof was not subject to the Minnesota Government Data Practices Act or the Minnesota Open Meeting Law, saying those laws infringed upon the school’s autonomy.

A 2004, Minnesota Supreme Court decision found the University is subject to those laws and that it did not violate the school’s autonomy.

And in 2013, the legislature and University clashed again when government officials questioned administrative bonuses, salaries and the number of administrators at the University.

“Ultimately, we lost in conference committee … because of threats of the University taking the state to court that we were violating its constitutional autonomy,” Pelowski said. “That’s a classic example.”

Eric Amel, secretary of the Prospect Park Association — which asked the University not to demolish the historic grain elevators — said the school’s decision to continue with the demolition represented an overuse of autonomy.

“University autonomy has gone off the rails,” Amel said. “They’re more powerful than the state, and that needs to be brought into balance.”

But Devine said that because of the school’s independence, certain building codes and zoning laws don’t have to be followed by the University, and that the school can exercise eminent domain to condemn buildings for demolition.

“At the end of the day, the Board of Regents can decide what to do or what not to do as it relates to a request or a mandate that the state might put forth,” Devine said.

He added that the University tries to be mindful of the state’s requests.

“The goal is for the Board of Regents and the governor and the Legislature to be compatible,” he said. “It’s complex, but it’s worked.”

While the state can provide incentives for the University to act as the state desires, the strongest power the state wields over the school is in the form of state appropriations.

“That line gets kind of blurry,” said Rep. Bud Nornes, R-Fergus Falls, who chairs the House higher education committee. “There’s not much the state can do except in terms of what we give them for funding.”

At least 19 other state constitutions contain a special guarantee of autonomy for its state university or university system.

Devine said the protection of the University’s autonomy is a core responsibility of the Board of Regents, and that ensures the school’s academic freedom.

“We are free-standing units,” he said. “We have the ability to carry on no matter what happens around us.”