Riot of color rings in spring 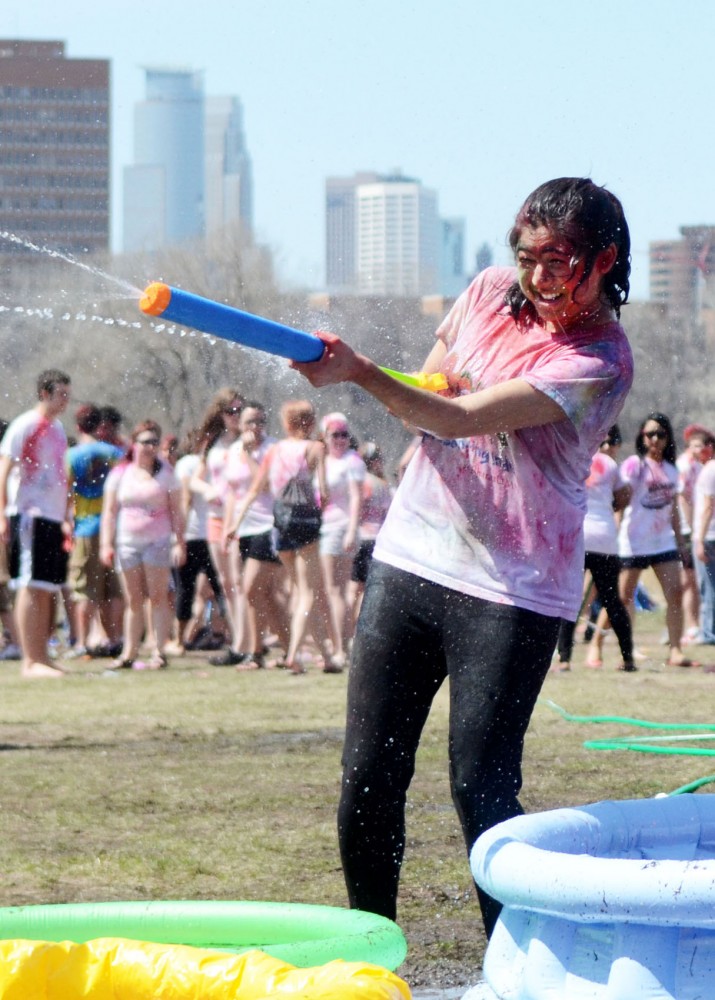 Preeya Bhakta sprays water at her friends at the Holi festival of colors on Saturday, April 27, 2013, at the East River Flats.

More than 700 students flocked to the East River Flats Park behind Coffman Union for a glorious riot of color and water Saturday.

The color fest, part of the traditional Indian celebration Holi,

was organized by Indian student group Bharat, in coordination with the University of Minnesota’s Spring Jam festivities.

The annual event marks the onset of spring. Holi is traditionally celebrated in March but a later date was chosen this year due to the unpredictable springtime weather.

The timing was right — during the weekend, temperatures hit 70 degrees for the first time since October.

During the event, participants threw a mixture of herbal color powder and water into the air, covering each other with the mixture. More than 1,200 two-tablespoon color packets and water guns were provided free to students, as were traditional Indian vegetable samosas and mango lassi drinks.

“The spirit of Holi encourages the feeling of brotherhood in society and that even enemies will turn friends for a day,” said Naveen Gupta, who works for Bloomington-based Kabobs Indian Grill, which catered the event.

Journalism freshman Molly Davis, who rounded up four friends for the celebration, said Holi makes it possible to “bring people together who normally wouldn’t hang out.”

“Everybody was throwing [color] at everybody,” she said. “I dropped a bucket of water on a stranger’s head.”

The event had a much higher turnout than last year, with more than double the number of participants.

Psychology freshman Lauren Kabel said she was excited to be a part of the color fest for the first time.

“It seemed like a healthy, socially acceptable way to let out some aggression,” she said.

Holi, a religious festival for Hindus, has become popular in recent years with many non-Indian communities and groups.

Ashish Kumar, Bharat’s vice president, said the group had planned months in advance for the color fest — its biggest event of the year.

The event, and others like it, helps support Indian students, specifically ones who are new to the country, said Bharat President Vishakha Mathur.

“It caters to many students who may be homesick or who’d like to connect with other Indian students,” she said, adding that students of many cultural backgrounds participate in the festivities.

Mathur said the color fest has been on campus since 2008, but this was only the second year the festival had coordinated with Spring Jam.

“This is really cheers to spring before we all get down to finals,” she said.