Hwa Rang Do, handed down from Korean tradition, emphasizes balance and humility. 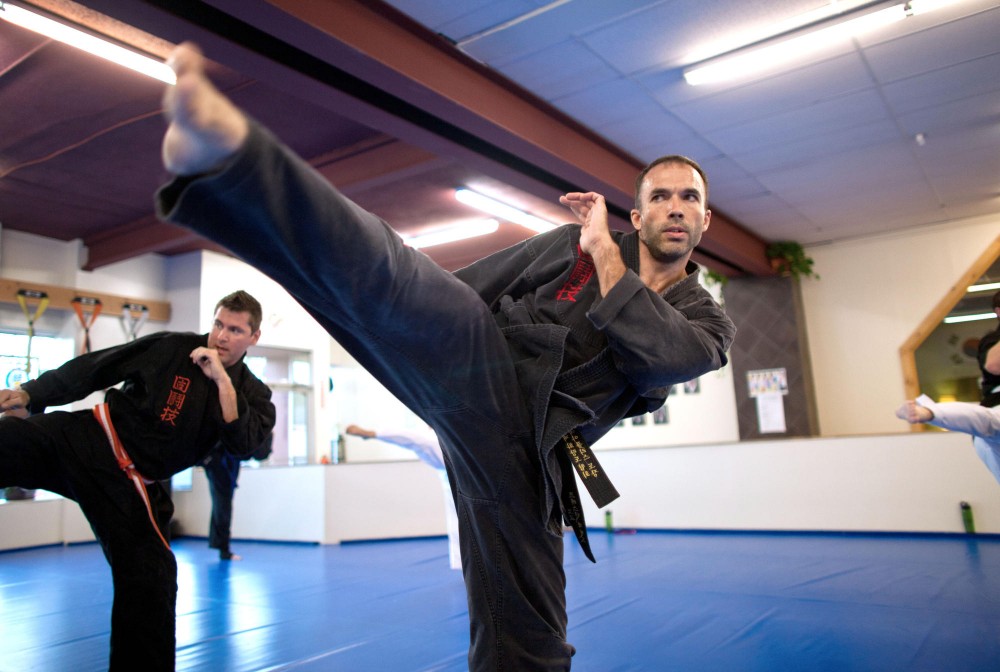 Instructor Preston Packard leads a warm-up Thursday at the Hwa Rang Do of Minneapolis Academy. The facility is a step up from the Armory where the University of Minnesota club used to practice.

Instructor Alyssa Marlenee grappled on the floor with a squirming student, trying to achieve a joint-lock submission âÄî a precise misplacement of her opponentâÄôs joint so that the slightest push could snap it.

Thursday nightâÄôs session at the 8,000-square-foot Hwa Rang Do Academy in Minneapolis was the first meeting of the fall semester. Just a handful of University of Minnesota students attended, most of them carpooling with Marlenee, the clubâÄôs president.

The Hwa Rang Do system, originating in the Koran peninsula, was brought to the U.S. in the 1960s by founder Joo Bang Lee.

Though the fighting techniques sound impressive, they are based in using strength to protect those who donâÄôt have it and practicing a balanced and humble yet confident way of life, said Dylan Sirny, owner and chief instructor of the Minneapolis academy.

As society has caught on to different aspects of Hwa Rang Do, its pedagogy evolved, said Mark Cheng, contributing editor of Black Belt magazine. But he said the central cores of Hwa Rang Do âÄî its curriculum and its âÄúguiding ethosâÄù âÄî have remained the same through the ages.

The same cannot be said of all martial arts, Cheng said. For example, virtually anyone can achieve a Tae Kwan Do black belt in five years or less, he said. As a martial arts system, Tae Kwan Do has been easily âÄúmass producedâÄù because of its relative simplicity.

But only one out of 1,000 students that begins Hwa Rang Do attains the âÄúblack sash.âÄù

Even fewer students move beyond to the upper levels of black sash. Sirny, a fourth-level black sash, holds the second highest rank in the Midwest.

Hwa Rang Do has also preserved itself by copyrighting its name so that only qualified instructors can open academies and teach. If Tae Kwan Do is like a magazine, Cheng said, Hwa Rang Do is the Holy Bible.

Describing it in a sports analogy, Cheng called Hwa Rang Do âÄúthe decathlon of martial arts.âÄù Even the best cross country runner might not have good hand-eye coordination, he said. Hwa Rang Do students combine almost every sports skill one can imagine.

Rather than watering down the art to appease people who just want bragging rights on their belt or rank, Hwa Rang Do created a âÄúfeederâÄù art called Tae Soo Do, Cheng said. Once students complete the junior curriculum in Tae Soo Do, they continue training in Hwa Rang Do.

Sirny said in past years the University club had 20 to 30 members signed up with dozens attending training at the Armory gym.

Although the facility wasnâÄôt ideal, the club members were grateful to have a space to train in for free, said Marlenee.

âÄúThe ROTC guys would be marching around us âÄ¦ [the gym] wasnâÄôt designed for martial arts training,âÄù Hunt said.

Gritty conditions didnâÄôt scare away everyone, though.

Stephanie Alexander trained with the club from 2003 to 2008 while getting her degree in youth development at the University. The floor gave her blisters and the winters were âÄúsuper cold,âÄù but she stayed.

Last year, Sirny called to ask Alexander if she would run a kidsâÄô afterschool program at the academy, turning her passion into a part-time job.

The current University club is mostly made up of graduate students who have less time, Alexander said.

Undergraduates who join the club gain benefits like a new training space and a chance to practice a martial art with curricular depth, she said. More importantly, though, they will begin to learn about the Hwa Rang Do culture: discipline, courtesy and commitment.

âÄúMost people are looking for a fun way to exercise,âÄù Alexander said, âÄúbut once you get into it you learn that itâÄôs so much more than that.âÄù