Hoosiers bump the Gophers out of Big Ten tournament

Though Minnesota beat Indiana earlier in the season, the Hoosiers had the last laugh Thursday. 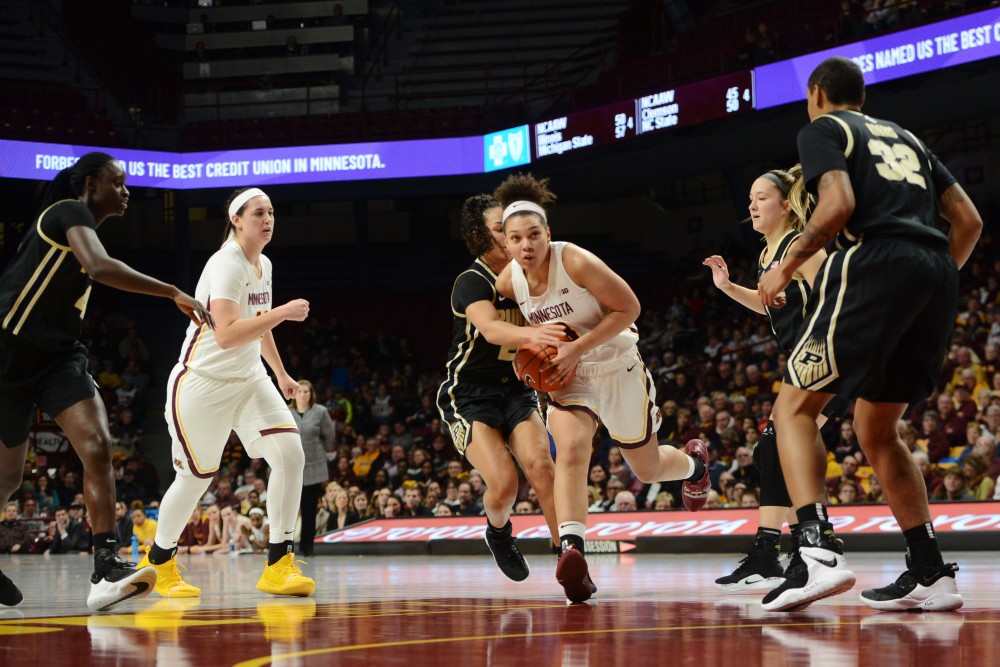 Sophomore Destiny Pitts runs through defenders toward the hoop during the game against Purdue on Thursday, Jan. 24.

The Gophers came into the Big Ten tournament as a higher seed than the Hoosiers.

In the end, the seeding didn’t matter. Indiana defended its turf in the team’s home state for the 66-58 victory to knock Minnesota out of the tournament.

The Gophers had already bested the Hoosiers earlier in the season on the road in Bloomington, Indiana by a score of 65-61.

However, Indiana got the best of Minnesota in the Indianapolis rematch.

The game got off to a rocky start for the Gophers. Indiana doubled up on Minnesota 20-10 after one quarter. Minnesota went 4-16 shooting during that frame, and at one point the team suffered a five-minute scoring drought.

Minnesota was able to keep up with Indiana for awhile in the second quarter, and scoring was even at 10-10 at the 4:31 mark. Over the next two minutes, Indiana forced turnovers and went on a 9-4 run. At halftime, the score was 42-28 for Indiana, and the Hoosiers were in full control.

During the third quarter, some of the momentum shifted to Minnesota’s side. Indiana continued to play strong, but the Gophers went on a 8-4 run during. Later, they brought the score to 47-40 with three minutes left in the third quarter, and 53-42 at the end of the third.

“We were fighting. We didn’t give up. The whole game, we knew that it still mattered even though we were down 10,” senior Kenisha Bell told the media. “We’ve been in games where teams came back from down 10 and won, so we knew that we were still in the game.”

The last ten minutes of the game saw Minnesota give arguably its best stretch of play. Ultimately, it wasn’t enough, and the team fell 66-58.

With under two minutes to go, the maroon and gold were able to bring themselves within six points. Then, Indiana worked to drain the rest of the time from the clock.

“It was definitely frustrating because I know how good we are as a team and how hard we work together,” Destiny Pitts told the media. “Just to kind of not see our shots fall in the first half and then [for] us to work so hard in the second half and not be able to get the success we wanted.”

Pitts led the team with 25 points on 8-21 shooting. It was her seventh straight game with at least 20 points.

Only two of Minnesota’s players scored more than six points in Thursday’s game. Beside Pitts, Bell scored 15 points on 5-23 shooting.

“It was really frustrating just because you know you can hit shots, and this is a time where you kind of need them,” Bell told the media. “But I mean, if I can get one last shot playing with the group of girls that we’ve got, then I’ll take it.”

Minnesota will now wait 11 days to find out its NCAA tournament fate on March 18.