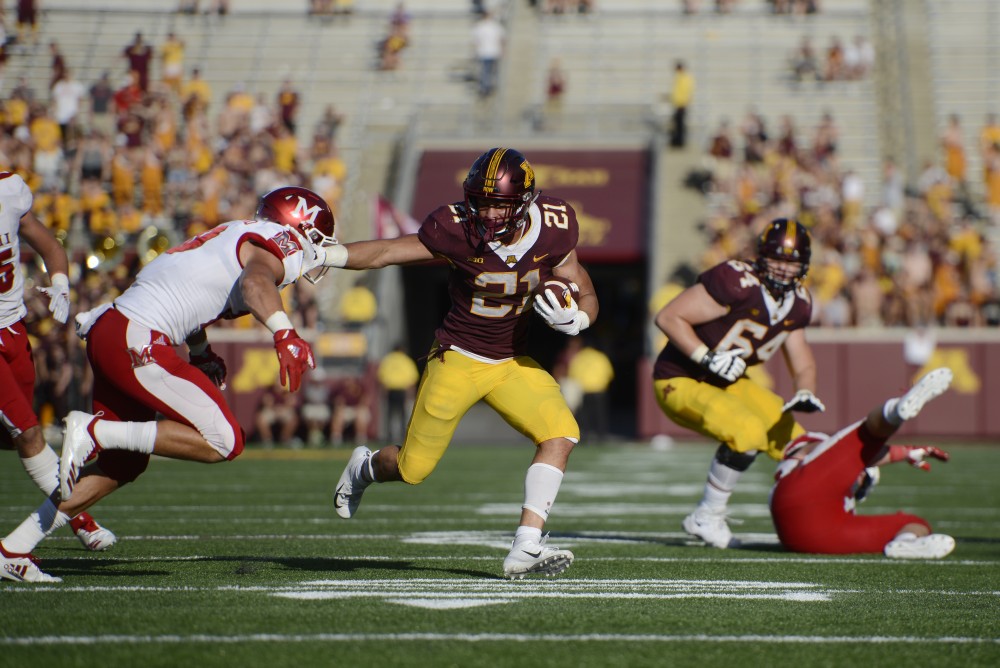 No Rodney Smith, no problem for Minnesota as it rolled over Miami to round out the non-conference part of the team’s schedule with record of 3-0.

Minnesota beat Miami of Ohio (0-3) 26-3 on Saturday afternoon at TCF Bank Stadium. The Gophers did not miss a beat while missing senior leader Smith. Junior wide receiver Tyler Johnson caught three touchdowns and true freshman Bryce Williams was able to carry the load for Minnesota. He had 33 carries and 141 yards on the ground, with 35 yards receiving as well.

Williams and Johnson carried the offense, they combined for 309 total yards between the two of them.

Head coach P.J Fleck said the offense could have played better. The Gophers turned the ball over twice in the red zone. One fumble by Williams and an interception thrown by Tanner Morgan.

“When you have multiple opportunities to score way more points, it’s our own fault,” said Fleck. “Failing is necessary to have success and this was one of those times offensively.”

The Gophers extended their lead in the second quarter. After a 31-yard punt return by Anotine Winfield Jr., the Williams had runs of 11 yards and 10 yards to set up Emmit Carpenter’s 44-yard field goal early in the quarter.

After punter Jacob Herbers pinned the RedHawks inside their own 5-yard line, Miami running back Alonzo Smith tripped in the end zone and Thomas Barber was credited with a safety.

“Herbers was the player of the game for us,” Fleck said.

With 1:45 left to play in the second quarter, the Gophers converted on third down and 17 with a screen pass to Williams for 35 yards — setting up Minnesota in the red zone. Redshirt junior Seth Green came in for the wildcat formation and threw a slant to Johnson for his first touchdown pass of his career. It was Johnson’s second touchdown catch of the day.

“He ran extremely hard, as there is with any freshman, there is going to be failing, and he is going to continue to grow,” offensive lineman Jared Weyler said. “I’m proud of him.”

Antonio Shenault intercepted Miami quarterback Gus Ragland’s pass and returned the ball 42 yards down to the RedHawks 12 yard line. From there, Annexstad found Johnson in the back of the end zone for the third time. Going into the fourth quarter, the Gophers had a 26-3 lead.

“I give credit to the offensive line, I couldn’t have gotten the ball without them,” Johnson said. “My quarterback has a lot of trust in me right now.”

Miami struggled to get anything going on offense against the stout Minnesota defense. The RedHawks finished with 199 total yards. They lost arguably their best player on offense, wide receiver James Gardner, when he collided with two Minnesota defenders over the middle.

The Gophers will start Big Ten play next weekend on the road at Maryland, who is coming off a loss to Temple. The game time is set for 11:00 a.m.

Minnesota is in familiar territory. Last year, the Gophers started 3-0, yet ended the season with just two wins in Big Ten play. They hope history won’t repeat itself.