Twenty percent of content in state literature is inaccurate or misleading, the study said. 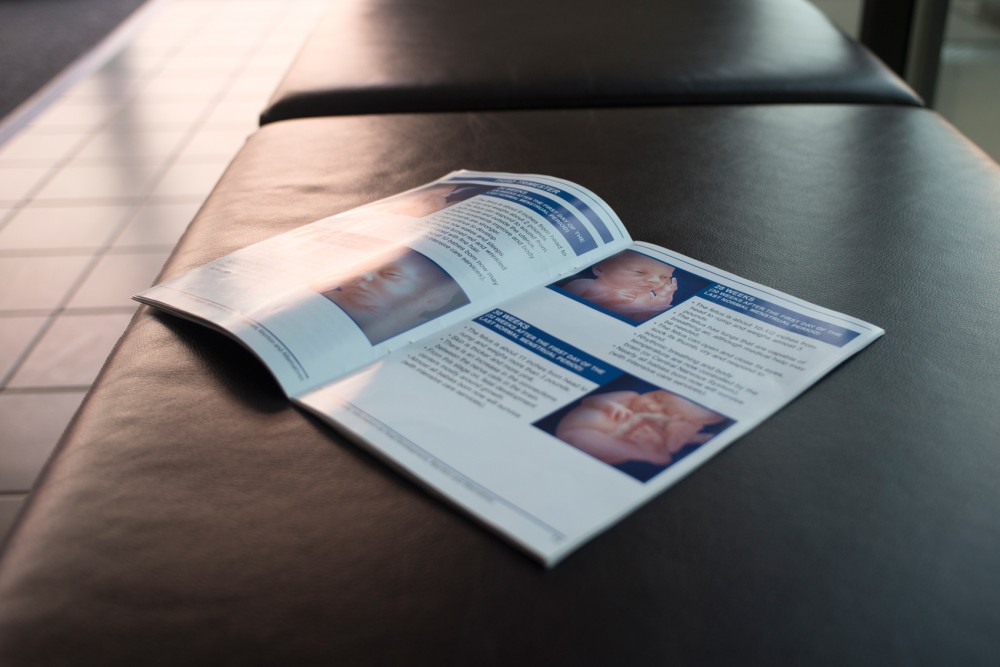 Despite being given out at most pregnancy clinics, a Minnesota Department of Health brochure "If You're Pregnant; Fetal Development, Abortion and Alternatives" contains some information that may be misleading or incorrect.

Hannah Weikel
A fifth of the information in Minnesota state-produced pamphlets given to women seeking abortions has been deemed medically inaccurate by new academic research.
The study examined pamphlets produced by states that have “Woman’s Right to Know”  laws. Under this law, Minnesota requires that before moving forward with an abortion, women must receive a Minnesota Department of Health pamphlet on risks associated with abortion and fetal development, as well as information on resources if she decides to carry to term.
Rutgers University researchers looked at 23 of the 29 states with the law for the study, which will be published in print next month in the Journal of Health Politics, Policy and Law. Researchers later added information on three more states to their study online.
Minnesota was among the states with the least amount of inaccuracies, with 51 out of 250 statements deemed incorrect by professional anatomists.
Statements in the MDH pamphlet like “Respiratory movements occur, but the lungs have not developed enough to permit survival outside the uterus [at 20 weeks of pregnancy]” were deemed inaccurate by a panel of seven fetal development experts, the study said.
Minnesota’s health department pamphlet hasn’t changed since it was first produced in 2003, said Janet Olstad, community and family health division assistant director.
“When the law was passed in 2003, we had a fairly short amount of time in which to put the materials together,” she said. “At that point in time, we based our pamphlet on some of the other states’ pamphlets [like] Louisiana, Kansas and Virginia.”
According to the study, Kansas was one of the highest-ranking states for medical errors in their pamphlets, with a 43.4 rate of inaccuracy.
Maggie Diebel, MDH community and family health division director, said they have been looking into making changes in the pamphlet for a while. However, she said, they have yet to target any specific information, and it will be three to six more months before the department could have an updated pamphlet to distribute.
“If there is going to be a state mandated information component, make sure it’s as accurate as possible. It’s definitely warranted,” said Sarah Roberts, University of California San Francisco obstetrics, gynecology and reproductive sciences assistant professor.
Focus on medically inaccurate pamphlets
After stripping the statements of state identifiers, the panel of fetal development experts used two scales to assess the accuracy or misleading nature of each statement.
Study co-author and Rutgers University Ph.D. Candidate Grace Howard said that in all 26 state handbooks studied, there were inaccuracies — usually descriptions of a fetus as more developed than it would be at that stage or unrealistic size and weight measurements.
“We saw in fetal development information a tendency to describe the fetus as more advanced developmentally than it was,” she said. “You can often see that in statements about viability, size and potentiality of a fetus.”
The last few pages of the MDH pamphlet describe abortion methods, medical risks and long-term side effects, including the “emotional side of abortion” and “fetal pain” — both contentious national issues.
“We have better research on the effects of abortion, like breast cancer, fertility and mental health problems,” Howard said. “The science has been clear that abortion doesn’t actually affect these things. There is new research that very much confirms that abortion does not cause mental health problems.”
Of all the pamphlets from the 26 states studied, the study found the most complete inaccuracies in the statements about the first trimester, during which many women get an abortion.
For example, the panel unanimously ranked “arm and leg buds present” during the second week of pregnancy as entirely medically inaccurate, according to the study.
“A fetus doesn’t actually have fingers, toes, legs [early in the pregnancy],” Howard said. “But a statement in the brochure might say this part is forming or will form.”
Across all states, one-third of all the statements were found to be inaccurate, the study said.
The research didn’t assess the lasting impact medical inaccuracies and misleading information has on women, but similar studies — examining women’s responses in states that offer ultrasounds or the chance to hear a fetal heartbeat before abortion — show that the vast majority of women still move forward with the procedure.
For some women, a lack of knowledge of how abortions affect women’s health and well-being leads them to agree with statements that aren’t backed up by science, Roberts said.
Howard said there hasn’t been any negative feedback, but state health departments that want to correct the pamphlets have contacted them since the study’s publication.
Delete Image
Align Left
Align Center
Align Right
Align Left
Align Center
Delete Heading