A new student apartment complex is breaking ground with a church at the base of it. 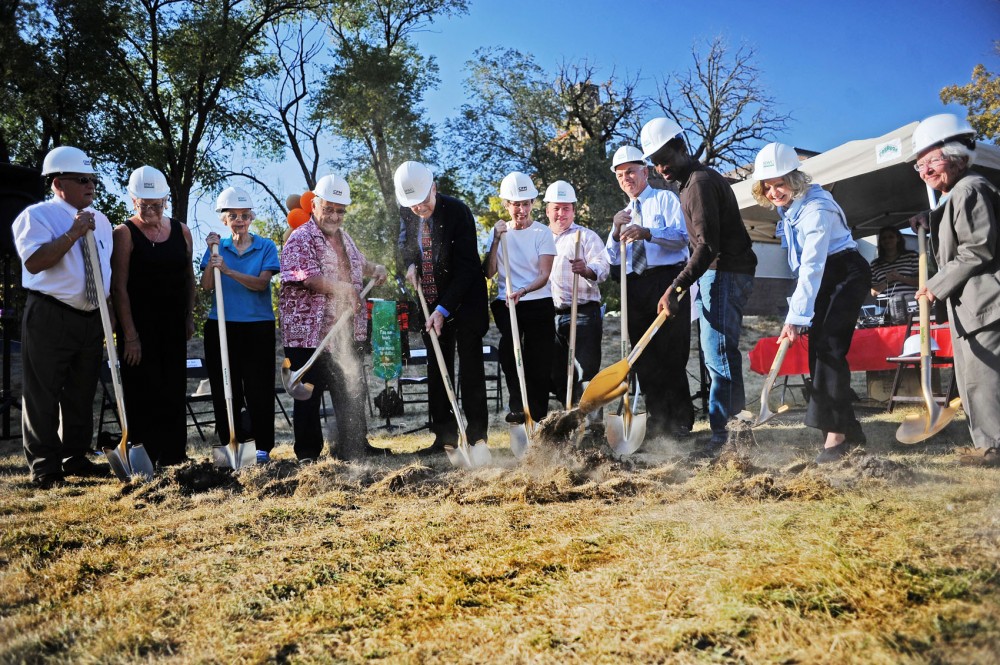 Representatives from CPM Development, Andrew Riverside Presbyterian Church and the City Council break ground for The Elysian, a new student apartment complex, Saturday in Marcy Holmes. The Elysian will be built on the site of the old church, which was demolished in 2003 after a wall collapsed, and will include dedicated space for the Andrew Riverside congregation.

In the winter of 2003, Amy Perez Ortiz brought her daughter to the Andrew Riverside Presbyterian Church. She had to bundle her 1-year-old daughter in a snowsuit because the sanctuary was freezing since the northern wall had collapsed.

“We had to say goodbye to the building,” she said. “We sat and looked at the stained glass windows for a long time.”

By Christmas, the church was demolished, and Perez Ortiz’s daughter had to be baptized at the University Avenue YMCA where the congregation has been holding its services ever since.

Almost nine years later, Andrew Riverside is getting a new home at its old address, on the ground floor of a student housing complex coming to the corner of Fourth Street Southeast and Eighth Avenue Southeast in Marcy-Holmes.

College Property Management broke ground on the Elysian on Saturday. Construction starts Tuesday, and the complex is set to open next fall, according to CPM.

The five-story, 56-unit building will house 147 bedrooms, according to city documents.

The church has owned the vacant lot since the original building was razed in 2003.

Henri Mitambo joined the church as a University of Minnesota student just before the building was demolished. Without a permanent home, about a quarter of the congregation left Andrew Riverside, but Mitambo stayed and now serves as chair of the church’s worship committee.

“It was difficult,” he said. “But we realized that the church is about the people.”

Pastor Harry Maghakian’s daughter called him three times while he was in Guatemala building churches in 2002.

Once to tell him his mother had died.

Then to tell him his brother-in-law had died.

And the third time to say a wall in his church had collapsed.

Since then, Maghakian, 89, has been leading worship services for Andrew Riverside at the YMCA while working to raise funds to rebuild the church.

The former realtor said he always wanted the church to share a new building with low-income or senior housing. Andrew Riverside went through three different developers on the project, but nothing got off the ground.

Becca Farrar, a Minneapolis city planner, said her office has been working on-and-off with various developers on the site for years. Because the church was considered a historic site, all plans had to be approved by the city’s historical preservation commission.

“We had to go up, down, over and around the commission,” Maghakian said. “That’s been almost a five-year struggle.”

The church partnered with CPM two years ago, and the firm restructured the project as upscale student housing.

“It’s a very unique transaction,” said Daniel Oberpriller, president of CPM. In exchange for the land, CPM is giving the church a free 99-year lease on the new space, as well as some money to offset operating costs.

To comply with the historical commission’s demands, Oberpriller said CPM had to shorten the building by one level and change its faÃ§ade to better match the historical look of the area.

In practice, Oberpriller said the Elysian will operate like any of the other mixed-use buildings around the University — the church and apartments will operate completely separately.

“It’s just like having a commercial tenant in the building,” Oberpriller said. “We don’t share staircases, we don’t share emergency exits, anything. The church is really self-contained.”

Having worshipped close to the University for years, members of the Andrew Riverside congregation said they aren’t nervous about sharing their building with students.

At Saturday’s groundbreaking celebration, congregants called out to passing students, inviting them to come eat and chat. A group of 40 teenage boys on BMX bikes stopped and mingled with the congregation.

“[Sharing the building] doesn’t worry too many of us. We just consider it an opportunity,” Perez Ortiz said. “We’ll probably ask them to come and eat, just like we did today.”