The University’s Morris campus outranks the Twin Cities in its energy conservation. 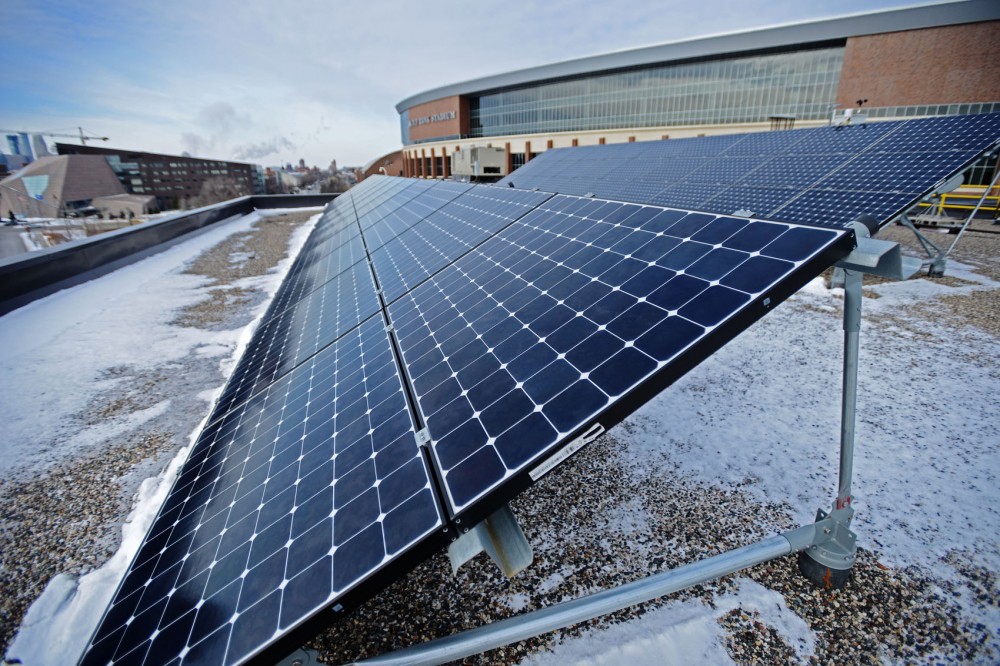 As Minnesota ups its solar capacity, the University of Minnesota has no plans to expand its efforts.

While the state has doubled its solar installations to 7,000 over the last two years and activated the largest solar electricity generator in the state, according to a Star Tribune article, the University only has two solar arrays on the Twin Cities campus.

The largest one, a 38.4-kilowatt solar photovoltaic panel — which powers about 4 percent of the building — is located on the roof of the University Office Plaza building, which houses the Minnesota Daily suite.

The $230,000 array came from a $1.35 million grant through the Minnesota Department of Commerce Office of Energy Security as part of the Energy Innovation Corridor — a series of energy-efficient projects along the Central Corridor light-rail line.

Xcel Energy donated the other solar installation, located on the roof of Rapson Hall, to the University
after it was removed from the Science Museum’s Science House in a renovation. It generates less than half as much energy as the other array.

Since its replant on Rapson’s roof, the solar array has been used for research and teaching, although few teachers have taken advantage of it, said Shane Stennes, sustainability coordinator for the University.

The University Office Plaza building was chosen for the larger array, Stennes said, because it was a relatively new building close to the Central Corridor that has south-facing exposure.

“It became the clear choice for where to put the array,” he said.

Though the University Office Plaza building installation was originally expected to generate about 3.6 percent of the building’s electricity, the panels have consistently produced at least 4 percent, Stennes said.

“They’ve been kicking out a lot more electricity than we expected,” he said.

Mechanical engineering senior Michael Hillger said he appreciates the University’s existing solar efforts but thinks more installations should be made.

“It’s good that the University is doing some sort of solar,” Hillger said. “There should be more done, but the little that they have is definitely a good thing.”

The Twin Cities vs. Morris

While the University has received some recognition for its ecological efforts, the University of Minnesota-Morris often outranks the Twin Cities campus in sustainability.

In 2012, the University received a silver rating from the Association for the Advancement of Sustainability in Higher Education, an organization that tracks conservation in colleges and universities. Morris received a gold rating.

Morris has three solar installations on or near campus, one of which heats about half of a research building.

Another installation is at ground level and allows students to study changes in solar output throughout the day, said Troy Goodnough, Morris’ sustainability coordinator.

In addition to solar installations, the university has one wind turbine and a gasification facility that uses agricultural products to produce up to 80 percent of campus heating needs.

“Our campus is working to produce more energy than we consume from renewable energy sources,” Goodnough said.

The University of Minnesota’s goal is to reduce emissions to 50 percent by 2021 and reach climate neutrality by 2050.

Stennes said the University has no specific plans for future installations.

“We’re always looking for opportunities to bring more renewable electricity to campus,” he said, “but we want to do it in a way that makes sense from a logical standpoint … in terms of being economically feasible and appropriate.”

The University has looked into installing a vertical wind turbine, which would produce less energy than the Morris installation but would work better in an urban environment, Stennes said.

“We haven’t found the appropriate application for that yet,” he said, “but it’s something that we continue to look at and think about in terms of bringing renewable energy to campus at a local level.”

The cost of efficiency

“They don’t have a lot of options to choose from in terms of renewable energy,” she said.

Shoup, who researched renewable energy on campus with University Facilities Management in summer 2011, said though the University’s current installations contribute little to its overall energy use, the University is making progress in solar.

“It doesn’t seem like two is a lot for such a large campus,” she said, “but it’s really hard to get something like that to be allowed in a university where budgeting and money is so tightly regulated.”

Minnesota Renewable Energy Society managing director Laura Cina said she gives the University credit for making an effort to install solar panels on campus, but it has hardly installed enough to support a small business’s electricity or heating bill.

“It’s not in any way, shape or form even making any kind of dent in reducing the amount of pollution that they are causing from their fossil fuel base,” Cina said.

She said the installations would be a much more effective teaching tool if they were visible to the public — like Morris’ educational solar patio.

“It’s kind of meaningless if it’s enough to cover 1 percent of your use.”