Some chapter houses are deteriorating, but as historic landmarks, they can be challenging to renovate. 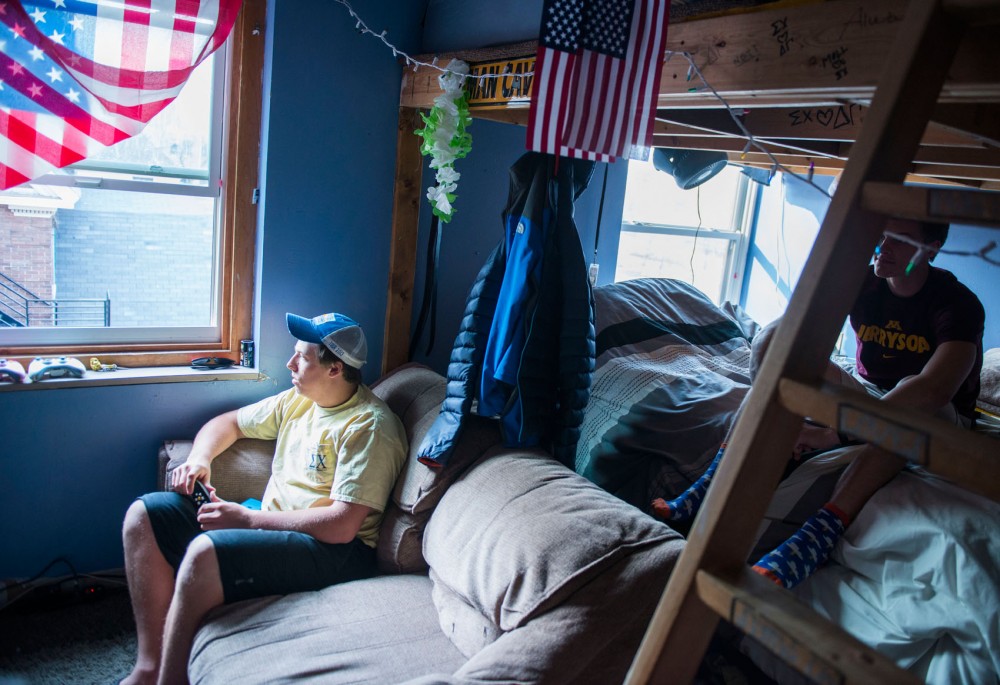 Sigma Chi fraternity members David Lofstuen and Garrett Hulse relax in their room in the main house of the fraternity on Sunday.

The stretch of University Avenue Southeast known as “fraternity row” is home to some fraternities that settled in nearly a century ago.

But after years of philanthropy events, parties and changing residents, many houses that decorate the street are beginning to deteriorate on the inside. Now, fraternities are searching for ways to pay for necessary renovations but are facing some roadblocks.

Though some fraternity houses are doing better than others, many face the predicament of updating their houses while staying within the confines required by their historical landmark status.

Because parts of fraternity row are considered a historic landmark, the houses on it are bound by strict rules when making changes or additions.

“They can’t just pop in 40 new windows. They have to have 40 custom windows with specific materials, installed by a specific contractor and approved by the [Minnesota Historical Society],” Office for Fraternity and Sorority Life Director Matt Levine said.

Chi Psi came to the University in 1874 and is the campus’s oldest fraternity. It has owned its space on University Avenue Southeast since 1884, said former chapter President Jacob Lutz.

The fraternity has torn down two previous houses on the property. Its current house, a historic landmark, was built in 1930.

The organization used alumni donations to make $6 million in renovations to the house in 2006, Lutz said. Updates included restoring all the house’s woodwork and the kitchen and turning the top floor into a study area, he said.

“Our fraternities are where the social events are happening,” he said. “They feel somewhat of a burden to entertain people and to have more people in their house,” he said.

Sigma Chi is one of the University’s most popular chapters, with about 90 members. Some live in its two houses — both with historic designations — on University Avenue Southeast, said chapter President Patrick Nelson.

Over the summer, Sigma Chi added a central air system to replace radiators in its houses, he said. Though the vent tubes are concealed in the house’s main areas, they are visible and low-hanging on the top floors because historic building regulations prevented concealing them in the walls.

Despite the regulations, he said the fraternity’s housing corporation wants to make more changes to the houses, as their interiors are livable but visibly aged.

As the University pushes growth in greek life, costly renovations to houses are becoming necessary. But funding solutions vary among chapters.

Some fraternities have funding from alumni donations to supplement their housing fund, but others, like Delta Upsilon, aren’t as fortunate.

Members live in a rented house close to fraternity row. Because the house isn’t a historic landmark, members have more freedom to make renovations but aren’t working with the finances other fraternities have.

“[Some fraternities’] alumni put a lot of money into getting major renovations done,” chapter President Jerry Weber said. “We kind of have to do everything on our own in this place.”

Recently, members took it upon themselves to put in wood panel flooring, paint and add couches to the basement, Weber said.

The University is exploring ways to combat the lack of funding for renovations for some chapters but hasn’t settled on a solution yet, Levine said.

One option is to support the Collegiate Housing and Infrastructure Act, a congressional bill that would allow those who donate to fraternities and sororities to use their donation as a tax write-off — something Levine said alumni aren’t currently able to do.

Fraternity houses are at about 75 percent capacity and continue to grow, but the immediate need for renovation can be difficult to address without more funding from membership dues.

Levine said he thinks the new luxury housing popping up across campus will create competition for some fraternities and sororities.

But Sigma Chi President Nelson said the inexpensiveness of living in a fraternity is one of the benefits.

“As far as location goes, amenities go and price goes, I don’t think there’s a better place than a fraternity house,” he said.

Because greek life is expanding on campus, Levine said, beds in fraternity houses are likely to fill up eventually.

The University is helping this growth by making it a long-term goal to reach the Big Ten median of 13 percent of undergraduates participating in greek life, according to the Greek Community Strategic Task Force Report.

Levine said despite the housing roadblocks, fraternities and sororities will survive on campus.

“It’s an investment. I mean, joining an organization like this has costs,” he said. “But you get out of the experience what you put into it, and we need to tell people what they can get out of it if they go all in.”