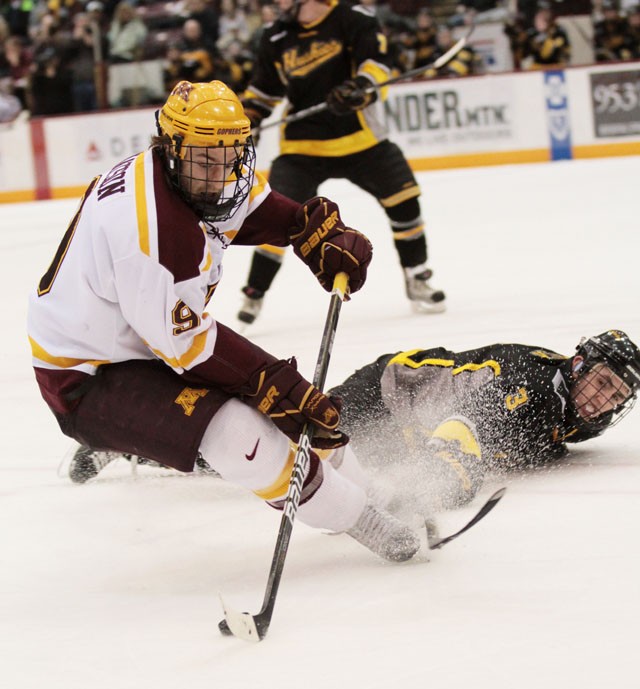 Michigan Tech is hardly one of MinnesotaâÄôs bigger rivals âÄî certainly not on the level of North Dakota or Minnesota-Duluth âÄî and is last in the WCHA by a wide margin; it has won just two league games this season.
But even as they were being swept, the Huskies left their mark on the 20th-ranked Gophers at Mariucci Arena. A brawl that resulted in two ejections and two 10-minute misconduct penalties late in SaturdayâÄôs second period encapsulated a surprisingly physical and antagonistic weekend, which included, of all things, a five-minute facemasking penalty.
On its way to a second-straight 5-2 win over Tech when tempers boiled over, MinnesotaâÄôs skirmish was reminiscent of its most recent Friday night in Grand Forks. Freshman Jake Parenteau and Tech senior Bennett Royer were booted, sophomore Seth Helgeson joined freshman Mark Alt in the box with MinnesotaâÄôs second 10-minute misconduct penalty in under three and half minutes, and when junior Aaron Ness was called for hooking eight seconds into the third period, it left Minnesota with two remaining defensemen to kill a 5-on-3 penalty.
âÄúThatâÄôs something you have to learn from,âÄù head coach Don Lucia said Saturday of his teamâÄôs rash of penalties after the whistle, âÄúbecause you get to the end of the year, and a bad penalty can end your season.âÄù
Fortunately for the Gophers (15-12-5, 12-10-4 WCHA), these bad penalties were instead part of a sweep that extended their unbeaten streak to five games âÄî their longest of the season âÄî and boosted them to fifth in the conference by 2 points with one week remaining in the regular season.
Three teams can still catch Minnesota in the standings; Colorado College has 26 points to MinnesotaâÄôs 28, WisconsinâÄôs 25 and St. Cloud StateâÄôs 24. Out of those three, however, only two are truly a threat, since the Tigers and Badgers face each other next weekend. Minnesota can afford to drop one spot and maintain home-ice advantage in the first round of the WCHA playoffs.
But thatâÄôs jumping too far ahead. Postgame Saturday, senior Jacob Cepis âÄî typically one of the GophersâÄô more outspoken players âÄî and junior Jake Hansen offered uncharacteristically candid comments on fighting, momentum and how their team is perceived around the league and the country.
To borrow CepisâÄô word, Minnesota has a certain swagger right now, having shown in the second half of the season that it can play with and beat the nationâÄôs best teams. In fact, a 3-2 win on Jan. 14 over current No. 1 North Dakota, which included a second period brouhaha much like SaturdayâÄôs against Michigan Tech, may have been the tipping point of the season.
âÄúI think that was definitely something that [brought] the team together,âÄù Hansen said, though the Gophers would lose four of their next six.
More recently, since a 7-3 drubbing of then-No. 4 Denver, Minnesota hasnâÄôt lost. In the absence of senior captain Jay Barriball, the Gophers have spread offense across three equally dangerous lines; five players now have double-digit goals. On Saturday, HansenâÄôs and CepisâÄô line, which is centered by freshman Erik Haula, had four goals âÄî three on the power play âÄî and four assists.
Cepis is on a five-game goal and six-game point streak.
âÄúThereâÄôs no question about it: WeâÄôre all confident that we can honestly play with any team in the country,âÄù Hansen, who scored his ninth and 10th goals of the season Saturday, said.
Hansen and Cepis also seemed to put opponents on notice when asked about SaturdayâÄôs fight.
âÄúEnough of that stuff where people are criticizing us for not being tough âÄî we showed we can be tough,âÄù Cepis said. âÄúYou want to try to bully us? ItâÄôs not going to work. WeâÄôre going to back ourselves up and âÄ¦ if someoneâÄôs going to take a shot at you then weâÄôre going to take a shot back.âÄù
Lucia, however, questioned the timing of his teamâÄôs desire to stand up for itself.
âÄúI think that stuff is more important in the first half of the year or January,âÄù he said. âÄúBut now weâÄôre a week away from the playoffs âÄî we have a lot at stake right now.âÄù
Lucia added, âÄúWe want to play hard whistle to whistle. Some of [the fighting] happened a few seconds after whistles âÄî we donâÄôt want that. WeâÄôre shorthanded as it is.âÄù