The 2018 Gophers were Big Ten regular season and tournament champs, and were one opponent away from making it to the college world series. 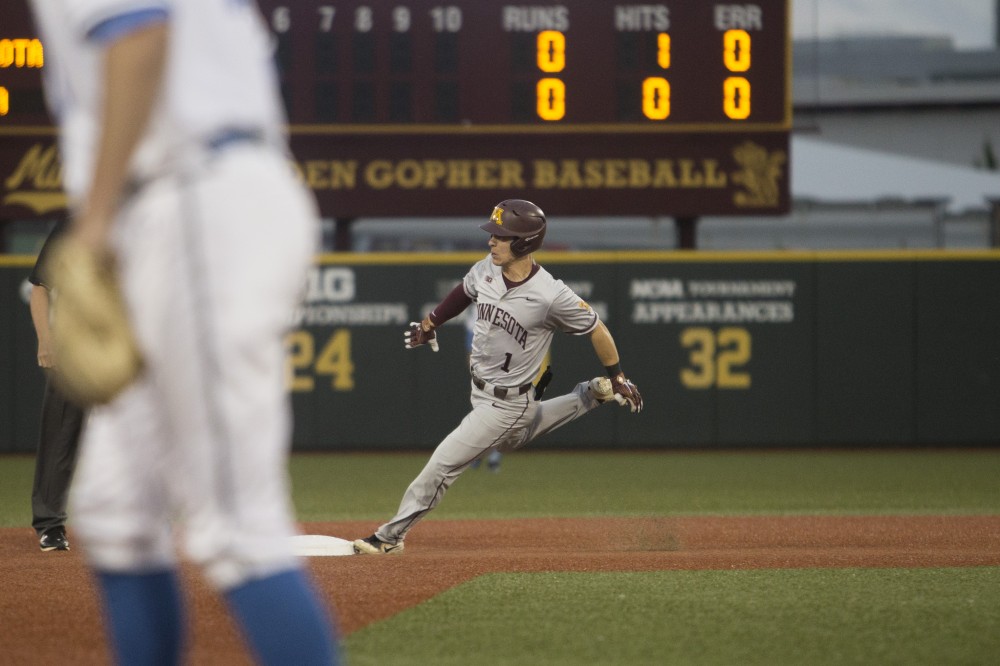 Outfielder Ben Mezzenga rounds second base during the game against UCLA on Saturday, June 2, 2018 at Siebert Field. The Gophers won 3-2.

Though it may not seem like it with the recent cold wave washing over campus, baseball season is ready to start in Dinkytown.

The Gophers’ baseball team, which went 44-15 overall and was one series away from the College World Series last season, started practice for the 2019 season on Friday. Minnesota won the Big Ten regular season and tournament championship last season. Four Gophers were selected in the 2018 MLB draft from that team, with the highest pick being then-junior Terrin Vavra, who was the 96th overall pick.

“We don’t want to forget it. We want to embrace that and take some confidence from that. … It’s elevated our program here, I think, to a different level on the national scene, and we’re going to embrace that part of it,” said Minnesota head coach John Anderson, who is in his 38th season as head coach. “But at the same time, this is a different team.”

The Gophers graduated six seniors from last season, and lost two juniors in the draft. Though it wasn’t a large class, those few had an impact, especially in the position groups. The starters who played in center field, third base and second base are all gone this season.

Ben Mezzenga, a senior outfielder who had the second highest batting average last season with a .383, said he plans on moving his position to center field as former center fielder Alex Boxwell graduated. Junior shortstop Jordan Kozicky and senior first baseman Cole McDevitt will lead the inexperienced infield this season.

“We’re going to need guys to step up who maybe hadn’t had much success previously in their years,” Mezzenga said. “A lot of those guys have been working extremely hard, and I know there’s going to be guys that are going to show up this year and really blow everyone away with how well they do.”

The Gophers will have two of the top pitchers in the country returning to lead the bullpen into 2019 with sophomores Max Meyer and Patrick Fredrickson. Meyer, who was drafted by the Minnesota Twins in high school, tied the Gophers’ record of saves in a season with 16, while serving as the closer last season. Fredrickson tallied a 1.86 ERA on 97 innings pitched, and he had a 9-0 record on the mound.

Both were tabbed as preseason All-Americans by baseballnews.com, but each said they spent time working on their game over the off-season.

“I think the different thing about me this year is I only had two pitches last year, so I worked on my change-up this year. … I’ll be throwing that a lot more,” Meyer said.

Last season, the freshmen were heavy in pitching, but this season there are many more position players in the class. There are 10 freshmen on the roster, with three of them in the bullpen.

“Heavy on position players, we lost more position players, but I really like this class,” Anderson said. “I think this class is really going to be a group that’s going to add to our tradition and history here, and they’re going to win some games for the Gopher baseball program, and they fit right in.”

Minnesota will play its first game on Feb. 15 against Gonzaga in the Surprise Baseball Classic in Surprise, Arizona.

Correction: A previous edition of this story misstated the number of seasons Gophers’ head coach John Anderson has held that position.