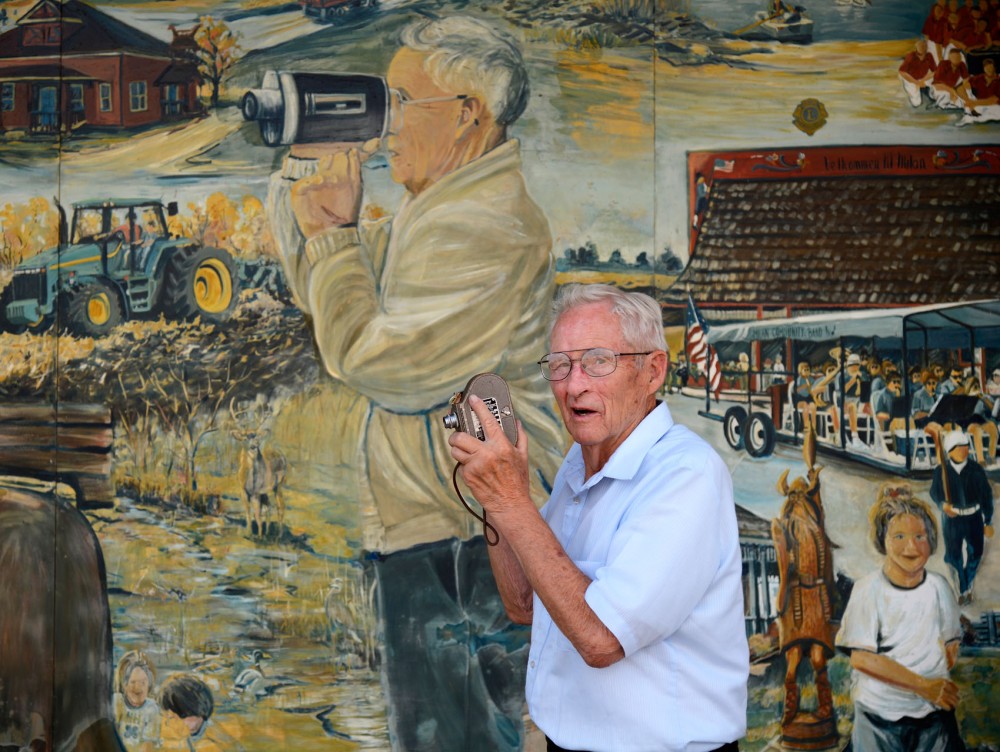 Billy Thompson stands with his camera in front of a mural in downtown Milan on July 25. The mural depicts Thompson documenting Milan's history, something he strives to do each day.

Jackie Renzetti
Weeks after a heart attack, Billy Thompson manually removed bricks from a burned-down church in Milan, Minn.
The 86-year-old saw the bricks as an important addition to his homage to the tiny Minnesotan town: the Arv Hus Museum.
Since 1985, Thompson has run the museum, which features Milan artifacts — including an ox yoke, a barber chair, old radios, more than 400 old photographs, and his own woodwork, among other treasures. In addition to the museum, Thompson has regularly filmed the rural hamlet, located roughly 150 miles west of the Twin Cities, since 1945.
Thompson founded the museum with his father, who originally came up with the idea. After assembling a small collection of historic photographs, Thompson put an ad in the paper and requested photos from senior citizens.
He accumulated more than 400 photos, and took the time to learn the stories behind them.
“People think, ‘You’re crazy,’” Thompson said. “I didn’t think it was crazy because more people should be aware of what their heritage is and what their forefathers went through to get here.”
Thompson’s wooden frames adorn some of the old photographs, and he likes to point out faces and recognizable shapes in the natural patterns of the wood.
The museum reflects his goofy sense of humor — a pair of eyes and a mouth created from wooden circles hang on the wall above a sign that reads “Norwegian security camera.” Thompson also features a built-in wooden outhouse, complete with gassy sound effects.
Thompson said a roughly 4-by-3-foot sawdust painting ranks among the most time-consuming of his projects at more than 70 hours. The painted particles of sawdust make up a detailed picture of a farm.
A high school woodshop class first sparked Thompson’s interest in woodworking, though he didn’t have time to fully pursue it until retirement, he said.
“When he gets into a project, he becomes obsessive, and he’s a perfectionist. If something isn’t right, he’ll take the whole thing apart and redo it,” said his daughter, Ann Thompson, who runs Billy Maple Tree’s, a gift shop adjacent to Arv Hus.
Billy Thompson said he strives to find new ways to create art with wood.
When explaining how he comes up with new ideas, he tells the following story: “These nuns asked, ‘How in the world do you ever think of this [wood carving]?’ And I said,
‘The good Lord put an idea into my head. My head, I put it into my heart. And from my heart, I put it into my hands.’”
As of 2013, the town of Milan held a population of 356 people. Billy Thompson often tells the stories of those people, their parents and grandparents.
“A lot of times strangers, when they say their grandma or aunt lived here … I’ll get Billy to come over, and he’ll know their grandma, great-grandma,” said Ron Anderson, town librarian and longtime friend of Billy Thompson. “These people sit there and they ‘oh’ and ‘ah’ because their grandma as a little girl comes to life. He’s been an important asset to the Milan community and Southwest Minnesota.”
Since first trying out a camera in 1945, Billy Thompson has continued to film the town of Milan. Though he doesn’t film every day, his films hold daily life moments as well as
special occasions.
“I had a comprehension that I would someday be able to use these things and show them to somebody else,” Billy Thompson said of his early film days.
He continues to film today, and the University of Minnesota at Morris has digitized 100 hours of Thompson’s films.
“It’s really a great showpiece of how things change. They’re fun to watch. When I moved out here, I heard about people that died and I’d never even seen them, but they’re part of our conversation. Looking at Billy’s movies, I got to see these people. It’s an amazing deal,” Anderson said.
After high school, Billy Thompson studied chemistry at St. Olaf College for three years. He then transferred to the University of Minnesota to study business.
“I had a professor, and we had the opportunity to take a morning class or afternoon class. I said I would rather have an afternoon class. And he told me, ‘You either take what
I give you, or go to school someplace else.’ So I did,” Billy Thompson said.
Following graduation, Billy Thompson started a carpet business but joined the army shortly afterwards, where he served two years in Alaska during the Korean War.
Billy Thompson went on to run his carpet business for 45 years, filming Milan and his family when he wasn’t working.
“He had a Super 8 movie camera, but the spotlight was really bright, and I was like, ‘Oh my gosh, Dad, get away!’ I would always run away when he got out the camera,” Ann Thompson said.
Ann Thompson said she was in college while her father started setting up the museum. She sees value in his films and all of his work.
“It’s a piece of our history and culture, and I think it’s important for us to realize where we came from. It helps us realize who we are today and influence our lives in the future.
And I think places like this are quite rare,” Ann Thompson said.
Delete Image
Align Left
Align Center
Align Right
Align Left
Align Center
Delete Heading