The gathering was part of a series of initiatives leading up to the U.N. Climate Change Conference in November. 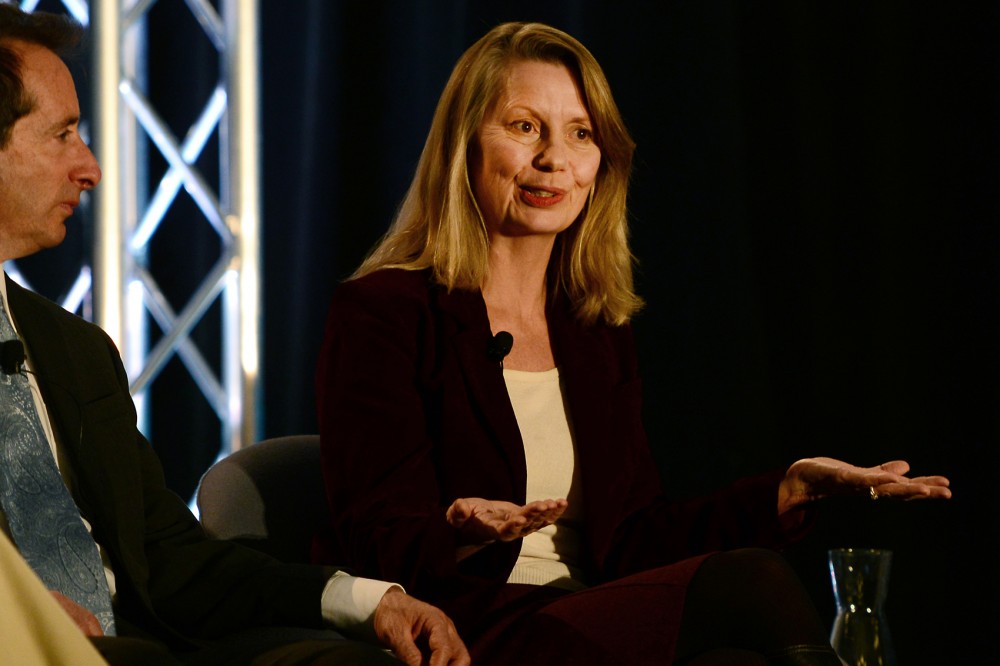 Executive Director of the University of Minnesota's Energy Transition Lab Ellen Anderson speaks at the Citizens' Climate Engagement Network Conference on Sunday. The event featured a variety of experts on climate change who spoke about the issue's local and global impact.

Eliana Schreiber
This year marks 21 years of United Nations climate change discussions, and Minneapolis was the last stop in a series of environment talks set to conclude in Paris next month.
In preparation for the U.N. Climate Conference in Paris beginning November, Partnership for Change, an Oslo, Norway-based organization, hosted a conference in downtown Minneapolis Sunday and Monday to get local experts talking about strategies for global climate policy.
Speakers and guests from the University of Minnesota and Augsburg College attended the conference, including President Eric Kaler. Local policymakers, business owners and scientists also attended.
Institute on the Environment Director Jessica Hellmann said the meeting on Monday was focused around taking action against climate change worldwide, as well as within local communities.
Hellman said green policies at the local level influence larger scale environmental policies. She said political leaders will play a key role by implementing policies that contribute to renewable energy and a green economy.
“If we see it being possible, then it’s less scary,” Hellman said.
Minnesota was chosen as the location for the talk because its environment policies are more progressive than other states, she said.
Ellen Anderson, a former state senator and the executive director of the University’s Energy Transition Lab, spoke at the conference. She said while coastal states like California and New York have longstanding progressive policies, Minnesota’s environmental policies stand out compared to the majority of the country.
The state has been working to reduce carbon emissions, improve renewable energy and partner with utility companies to push the issues forward, she said.
But Hellmann said Minnesota still has work to do in areas like agriculture, transportation and power plants.
Because areas around the world span a diverse array of environments, Minnesota could be an appropriate model for some and not for others, Hellmann said
“There was a lot of enthusiasm in the room about Minnesota as an innovative opportunity,” she said.
J. Drake Hamilton, science policy director at Fresh Energy, an energy efficiency advocacy group and attendee of Monday’s meeting, said people are seeing new business opportunities in clean energy.
Hamilton said Minnesota is cutting carbon emissions, pointing to the Clean Power Plan, a federal law President Obama and the Environmental Protection Agency announced in August.
“Meeting the Clean Power Plan targets to cut carbon from existing power plants is doable, and we know it’s doable because we’re already on that trajectory,” she said.
The University will send a delegation of 10 people to the Paris conference in November, Anderson said.
“What we’re demonstrating is that what you do at the state level and what you do at the community level have a big impact on what happens globally,” Anderson said.
Delete Image
Align Left
Align Center
Align Right
Align Left
Align Center
Delete Heading