Commissioner’s mind is fit for the job

John Tuma’s passion for wildlife and his learning disability may aid him in his new position as Public Utilities Commissioner. 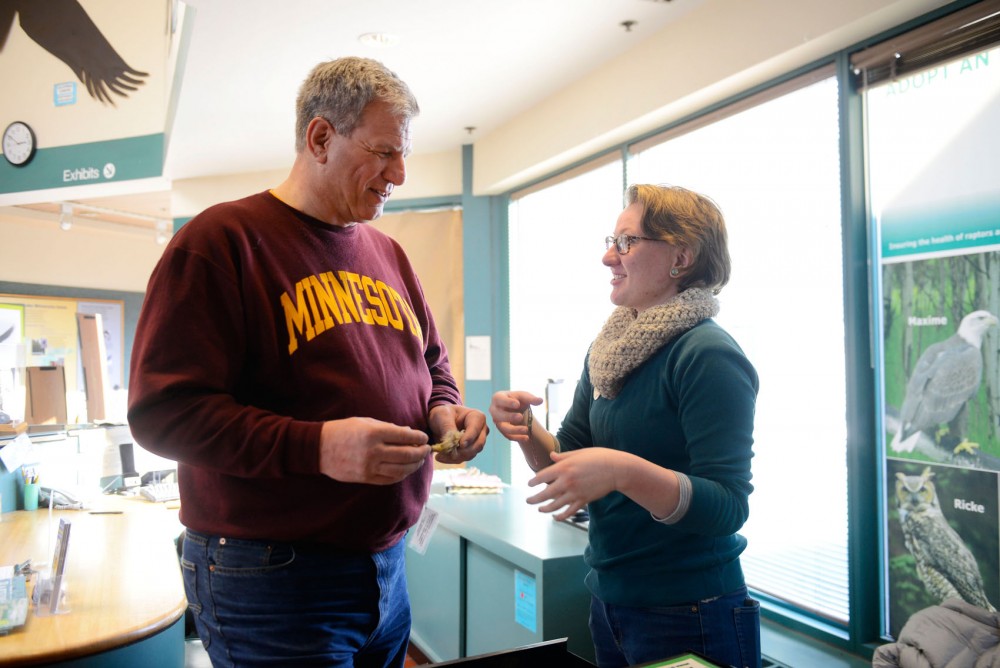 John Tuma can see and decipher things in ways others cannot.

While bird watching with his daughter, he spots wildlife others might not see.

He can disassemble parts of legal documents in ways others might not have thought to.

These unique skills — which Tuma credits to a learning disability — are what those closest to him believe have made him successful in his careers as a lawyer, a state representative and a lobbyist. Now, those abilities should benefit him in his new position as a member of the Minnesota Public Utilities Commission.

Gov. Mark Dayton appointed the University of Minnesota Law School alumnus to the commission in January, and he began work there last week.

Over the next six years, Tuma will vote along with four other commissioners on state utility issues like energy utility cost increases, state adherence to federal environmental standards and the Sandpiper gas pipeline project that could run beneath Minnesotans’ backyards.

Tuma, 52, was lobbying at the state Legislature when he learned of his nomination. At first, he wasn’t sure the job was for him.

“It really was not anything I was looking for,” he said. “I was happy being an advocate at the Legislature.”

Mike Bull, director of policy and communications for the Minnesota Center for Energy and Environment, which Tuma had worked with as a legislator and advocate, helped convince Tuma that the commission could use a mind like his.

When Tuma lobbied for certain hot topic issues like energy conservation or mercury reduction at the Legislature, Bull noticed he brought different perspectives that others hadn’t.

For instance, Tuma often drew parallels to debates in the state’s history that related to current issues, helping lawmakers come to a consensus.

Bull said Tuma’s bipartisan support comes from the way he communicates with people.

“This active listening and the focus, I think that comes from the way his brain works,” he said.

That skill has come from having to embrace auditory learning, as Tuma’s dyslexia makes it difficult for him to read things in print.

Dyslexia is a learning disorder characterized by difficulty reading due to problems identifying how speech relates to letters and words.

When Tuma was young, the disability led to a lot of frustration in school, which often landed him in the principal’s office.

But even then, he was able to interpret school rules in a way that got him and his friends out of trouble. Those experiences sparked his
curiosity about law.

“I kind of figured — well, if I could position [my friends’ and my] right to overcome this, maybe I’d be a pretty good advocate or lawyer,” Tuma said.

When Tuma studied at the University of Minnesota’s Law School, he found his disability aided his learning.

“Law is a very technical thing to read where every word means something, and that’s how I learned to read as a dyslexic — by breaking every word and every syllable down,” he said. “I was working in an environment reading in a way that my brain was designed for.”

Tuma was influenced by Humphrey School of Public Affairs legislative fellow Steve Sviggum, whom Tuma first met when he gave a speech at his high school.

After about a decade of mentoring Tuma, Sviggum nominated him for the state Legislature. Tuma was later elected to the House of Representatives.

Outside of politics, Sviggum and Tuma bonded over their love of running.

“I don’t know if he ran from house to house when he was door-knocking [for his campaign], but he had a lot of endurance,” Sviggum said with a laugh. “He sure worked hard.”

When Tuma ran, it sparked another passion — the environment. He admired the wildlife, bodies of water and land around him on his runs, and wanted to protect it.

That passion influenced both his work and his family.

“We have a lot of the same interests together, so he’s always been the one to take me out and kind of nourish my love for nature and conservation,” said his daughter Molly Tuma, who is studying environmental sciences at the University of Minnesota.

John Tuma’s colleagues and family said his concern for wildlife and conservation, paired with his distinct perspective, could aid him as a public utilities commissioner.

“I’m a little different — the way I think at things. But really, even though it’s different, I have something that could contribute to life and family or society,” Tuma said. “[Dyslexia is] not really a handicap at all.”