Ralph Sampson III and Andre Hollins are getting over ankle injuries. 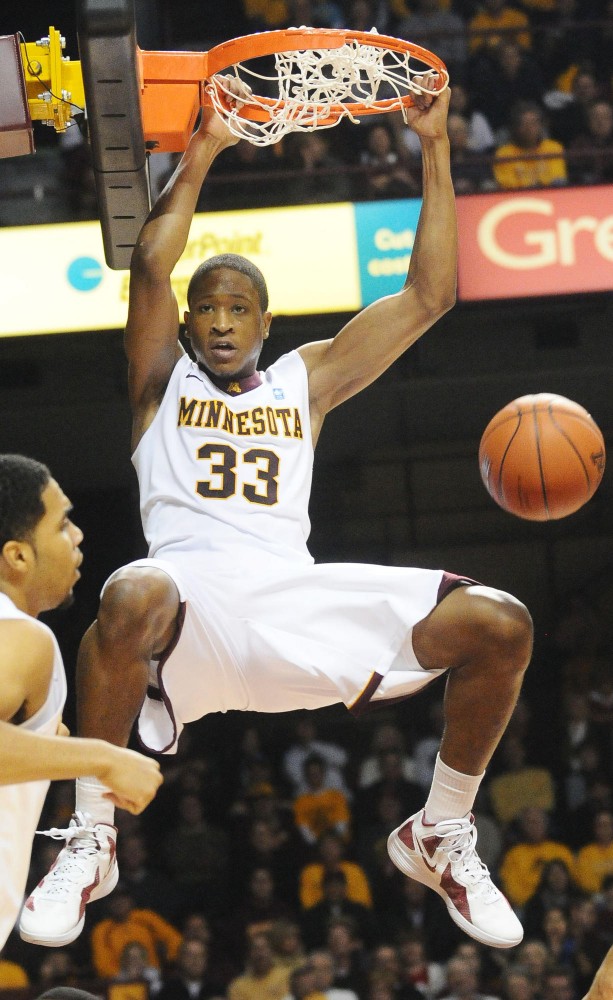 Could the Gophers be a better team without Trevor Mbakwe and Ralph Sampson III?

In the long run, probably not. But as Minnesota (8-1) rides a two-game winning streak into TuesdayâÄôs home game against Appalachian State, everything besides the teamâÄôs health is going surprisingly well.

At Tubby SmithâÄôs Monday press conference, the fifth-year head coach discussed in depth how his team has improved with its two senior big men out of the lineup.

âÄúThe guys know that they all have to do more of the little things, like screening, cutting, passing, rebounding,âÄù Smith said. âÄúWe understand now that it has to be a team mentality and not just âÄòtry to find Trevor.âÄôâÄù

âÄúTrevor drew a lot of attention inside, and I think that made us a little bit stagnant,âÄù he added. âÄúGuys were kind of standing around.âÄù

While MinnesotaâÄôs offense hasnâÄôt lit up the scoreboard without Mbakwe âÄî the team has averaged 56.5 points in the two games since his injury âÄî it has allowed a number of individuals to thrive.

Junior Rodney Williams, who has started at power forward in MbakweâÄôs place, is averaging 13 points, 8.5 rebounds, 2.5 blocks and 3 steals at his new position. Prior to MbakweâÄôs injury, when Williams played small forward, he averaged 7.7 points, 2.7 rebounds, 1.0 blocks and 1.6 steals.

âÄúRodney has probably benefited more thananybody with moving a position,âÄù Smith said. âÄúHeâÄôs really becoming a complete player. HeâÄôs maturing and growing up and understanding how he can best help the team.âÄù

Williams is shooting 60 percent from the field this season and 79 percent in his last two games. Last season, he shot 47 percent.

âÄúI think IâÄôve been able to outrun the [big men] that have been guarding me,âÄù Williams said. âÄúThatâÄôs why IâÄôve really excelled since TrevorâÄôs been gone.

âÄúRight now I feel like [power forward] is my best position just for the fact that I can create a lot of mismatches that way,âÄù he added.

Williams also credited his teammates for getting him open shots.

A big part of that is junior college transfer Julian Welch, who has become the GophersâÄô best outside scorer and facilitator over the past week and a half.

He was able to step into the starting lineup as the shooting guard after Mbakwe went down and has since seen his minutes-per-game average increase from 19.3 to 33.

WilliamsâÄô minutes per game have gone up from 26 to 36. He played the first 19 minutes in the second half of MinnesotaâÄôs 55-40 win against USC.

As a whole, Smith has been forced to use his bench less, especially in the second half. He has cut down on using âÄúline changesâÄù âÄî substituting in all five reserves at once âÄî while giving his starters extended minutes.

Those things may have never happened if Mbakwe hadnâÄôt gotten hurt.

âÄúSometimes out of adversity âÄî out of necessity âÄî innovation happens, and all of a sudden, look what weâÄôve discovered,âÄù Smith said, âÄúThatâÄôs pretty much what has happened for us.âÄù

Sophomore Austin Hollins has moved to small forward but is more of a conventional shooting guard. He said the guards understand their new role.

âÄúItâÄôs just a matter of going out there and knowing what we have to do,âÄù Hollins said. âÄúThe guards have to go in there and get a lot more rebounds, and we have to be more aware on the court.

About Welch, he added: âÄúJuliancomes in and heâÄôs a leader on the floor, and he brings in another guard that can shoot the ball.âÄù

The tandem of Welch and Williams has been MinnesotaâÄôs calling card down the stretch of games, where it has excelled throughout 2011-12.

The Mountaineers (4-3) have never defeated the Gophers, and are 1-6 all-time against current Big Ten teams, with their only win coming in 1993 against Nebraska.

Still, Smith said Minnesota will need to continue its high level of play to maintain its undefeated home record (7-0).

âÄúTheyâÄôve got a good team, a team that can come in and beat us if we donâÄôt come in and play our game and control the tempo,âÄù Smith said.

Smith said Monday he wasnâÄôt sure whether Sampson (ankle) would play Tuesday. He also said that freshman point guard Andre Hollins did not practice Sunday after he twisted his ankle in Saturday’s game.