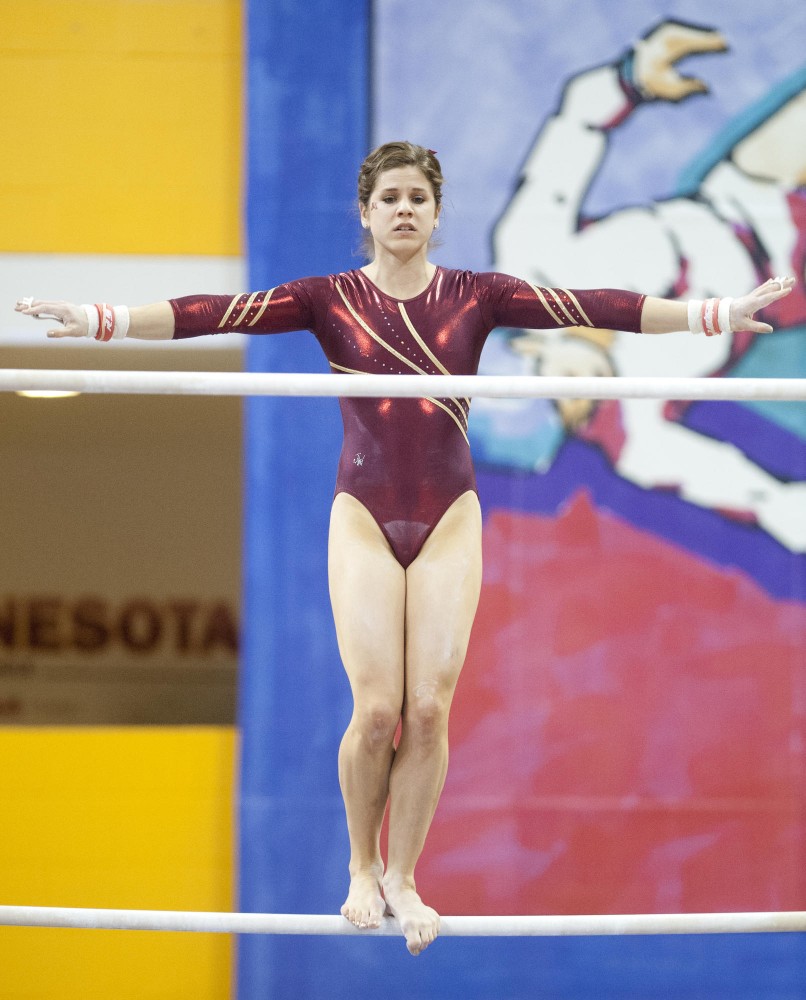 Lucy Ennis scored a 9.875 on vault in a four-way tie for second. The senior stepped in for injured teammate Dusti Russell. The Gophers won over Denver, Iowa and Arizona State with 196.225 points.

The Minnesota gymnastics teams have undergone a role reversal over the last two weekends.

The men ended their six-meet winning streak last weekend against Illinois at a tri-meet with Nebraska. The losing streak continued Saturday against Penn State.

It was the opposite with the women’s team, which won both of its last two meets against Iowa State and a quad-meet against Denver, Iowa and Arizona State. The team had only won two games previously.

“What was really exciting about this meet is all the teams were ranked pretty close together,” head coach Meg Stephenson said. “It really went down to the last performer on every event.”

With its performance at this meet, Minnesota clinched a spot in the evening session of the Big Ten championships meet, which is reserved for the top-four conference teams.

With the conference championships a week away, Stephenson decided to sit out Dusti Russell  on the vault and floors exercise due to a sore ankle. Lucy Ennis stepped up on vault and placed second in a four-way tie with 9.875 points.

“We really have each other’s backs. Just being able to step in for Dusti and really hold our own,” Ennis said. “Knowing that going into next weekend, we can compete in all conditions.”

This meet also served as preparation for Big Ten championships in a more logistical way.

“This meet, we went into it wanting to really take advantage of the opportunity to compete with a lot of other teams — a quad-meet — because that’s coming up. Big Ten and [NCAA] regionals will be the same,” Ennis said.

Kayla Slechta was also a part of the tie for second on vault along with Iowa’s Emma Stevenson and Arizona State’s Samantha Seaman.

Shannon Golich finished second on balance beam with a 9.85. Cierra Tomson placed third in the all-around competition with a personal record 39.25 points.

The women compete Saturday in Iowa City, Iowa, for the Big Ten championships.

The No. 6 men’s team struggled Saturday at No. 4 Penn State. The Nittany Lions accumulated 359.3 points, the highest in the nation this year. The Gophers put up a season-high 347.9 points.

A Penn State gymnast championed every event, and the team overall won each apparatus.

Russell Dabritz was the only Gophers gymnast to offset this dominance. He tied for first on parallel bars with Penn State’s Felix Aronovich at 14.9.

“The scores didn’t reflect how we did. I think we had a great meet. … For the most part, we all had one of the best meets of the season,” Dabritz said. “Routine-wise, we’re all in great shape, and I don’t think we have anything to worry about going into the next few meets.”

Zack Chase did not travel to this meet due to a neck spasm, and Matt Frey replaced him in the lineup. Freshman Kyle Banks also returned to the team after dealing with a heel injury the past three weeks.

The men’s team has its last home meet of the season Saturday against Oklahoma and Ohio State at the Sports Pavilion.