Boynton is publicizing SNAP benefits that many students are eligible for. 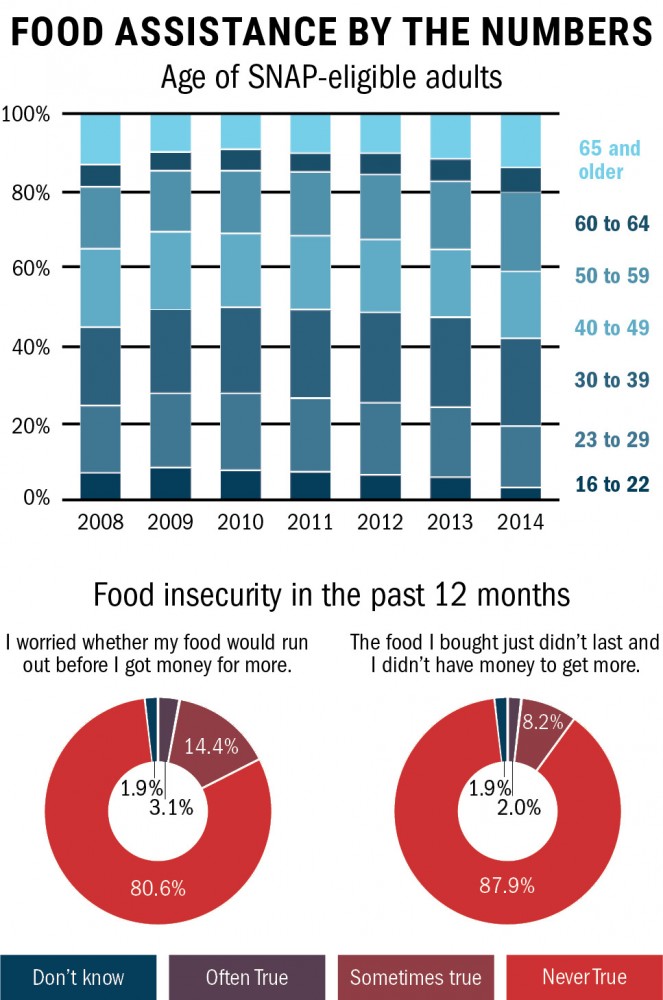 To help ensure students have access to groceries, the University of Minnesota will begin encouraging students to sign up for a food assistance program.

After a student-led push, this month Boynton Health will send emails to encourage students to sign up for the federal Supplemental Nutrition Assistance Program, or SNAP.

Dave Golden, Boynton’s director of public health, said he wanted to promote SNAP because of Boynton’s 2015 College Student Health Survey results, which found more than 17 percent of University students worry about having enough money to buy food before it runs out.

“[SNAP] is intended for people that have lower access to income, and it helps supplement food dollars so they can buy food,” he said.

To qualify for the program, participants must have low income, have a work-study job or work over 20 hours per week, Golden said.

A one-person household must have a net monthly income of $990 or less to qualify for the program, he said.

Less than 5 percent of those using the program are between 16 and 22,, according to the Minnesota Department of Human Services.

Boynton will send out 500 emails after spring break to a random sample of students to explain the eligibility requirements for SNAP.

“We don’t know, necessarily where everybody is,” he said. “We’re going to see what kind of response we get.”

Based on the response, Golden said Boynton will send out another 500 emails to students as well as follow-ups with the first set to see if any signed up.

Golden said long-term chronic stressors — such as worrying about how to pay for food amid a busy semester — can be detrimental to students.

“Every little bit helps,” he said. “It takes away one of those big stressors.”

“This kind of came from early conversations … where we were prioritizing food and housing insecurity,” Syedah said, adding that MSA partnered with students in the College of Education and Human Development to research what food insecurity looks like on campus.

The campus food pantry, Nutritious U, gave away its entire food stock the first day it was open, something that Syedah said shows students will use food assistance programs if they are offered..

She said MSA also reached out to the Office for Student Affairs and Student Counseling Services to find out how students could use SNAP benefits on campus.

“I don’t think a lot of students wouldn’t meet those income guidelines because we’re all broke,” she said. “A very notable number of students could be eligible.”

Ensuring students have regular access to food is one of MSA’s priorities this semester.

Will Macheel, an applied economics freshman and MSA intern, helped create the Gopher Community Supported Agriculture program, which allows students to pay $100 and get produce from a nearby farm for six weeks.

“This program is a great opportunity for students to diversify the food that they’re eating and focus on food that is local and organic,” he said.

Student Counseling Services is also taking note of students who indicate food insecurity issues and directing them to the appropriate programs, Syedah said.

“If you’re a student who’s ever sacrificed a meal to pay rent or if you go to bed hungry, you’re probably food insecure,” she said. “It’s one of those things we want to have a conversation about.”