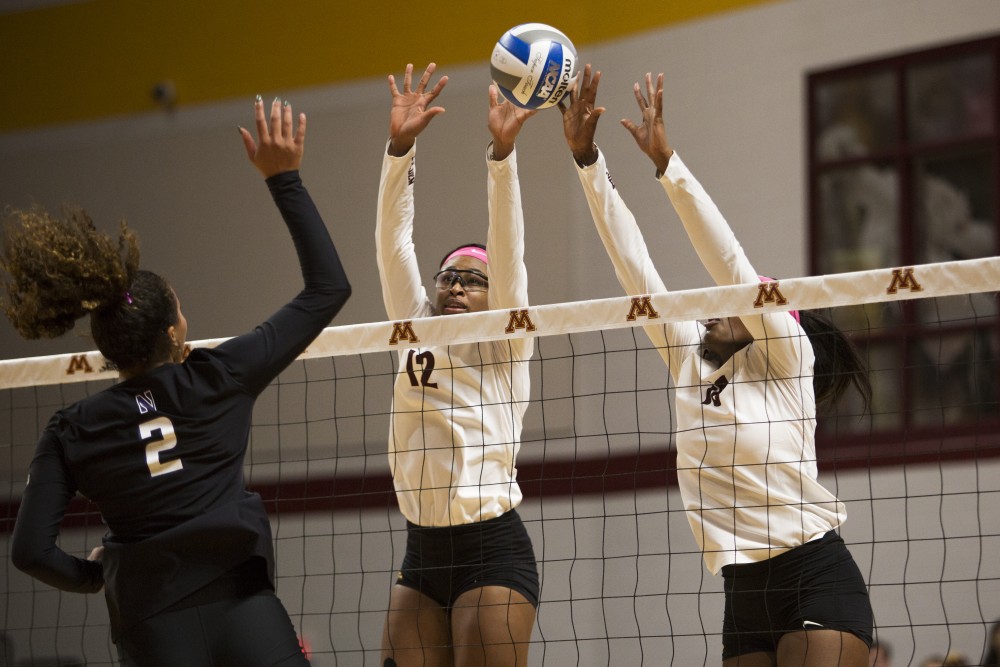 Redshirt junior middle blocker Taylor Morgan jumps to block the ball during the game against the Northwestern Wildcats on Saturday, Oct. 13, 2018. The Gophers beat Northwestern in all three sets.

After having her collegiate career marred by four knee surgeries since joining the Gophers volleyball team, redshirt junior Taylor Morgan is having a standout year.

“I’m just so proud of her and so happy for her in the way the season’s going,” said head coach Hugh McCutcheon.

The middle blocker from Blaine, Minnesota joined the volleyball program in 2015 but was red-shirted due to an injury. Throughout 2016 and 2017 Morgan played in 35 sets while converting 49 kills and 29 blocks.

This season however, the Morgan has powered 122 kills while having the best hitting percentage in the Big Ten with .416, while also leading the team with 62 blocks which is sixth best in the conference.

“She had to face a lot of adversity her first few years,” McCutcheon said. “But to see her playing with as much confidence, presence and consistency is very fulfilling.”

Morgan attributes her success to listening to her coaches and learning to hit high and deep on the offensive side.

“I don’t tend to hit high,” Morgan said in a post-game interview Sept. 29. “That comes from the coaches telling me … and I thought it was a good night to put it into play.”

Morgan had 12 kills while hitting .923 percent that night against Indiana.

Defensively, not shutting her eyes when she jumps up for a block has worked well for her she said.

“Coaches told me to open my eyes and it actually worked,” Morgan said. She started wearing sports goggles last season to help keep her focus on the ball.

Morgan is one of three upperclassmen that consistently play. With more experience comes more leadership responsibilities, and she said she has picked up the role of the team’s ‘mama bear.’

“I’m there to say, ‘Hey, it’s going to be okay, keep swinging,’” Morgan said. “But when they get a good kill or block, I’m also the one to slap the floor, give them high-fives, give them chest bumps. I’m just their biggest supporter … I definitely get the sense of ‘mama bear,’” Morgan said.

For Morgan, personal expectations were the last thing on her mind coming into the season. She said being prepared was the most important part.

“I was just like, ‘Okay, I’m a junior, so if they need me I’ll be there and ready,’ but I didn’t want to get too much into expectations,” Morgan said.

One of Morgan’s goals is just staying injury-free.

“I was just honestly trying to stay healthy, I didn’t want another knee surgery,” Morgan said. “I was just trying to do everything the coaches asked me to do and do it for the team, but I’m going to be healthy.”

For some who have serious knee injuries, the thought of it happening again might linger in the back of their minds. But it’s not even a thought for Morgan anymore.

“I spent a lot of time and energy on that in the past, and nothing good came from it,” Morgan said. She said that she even sometimes she forgets she has a knee brace on until it starts to slide down during action.

From now until the end of her career, Morgan is aiming for constant improvement.