The festival featured a variety of submission based art, music and dance pieces. 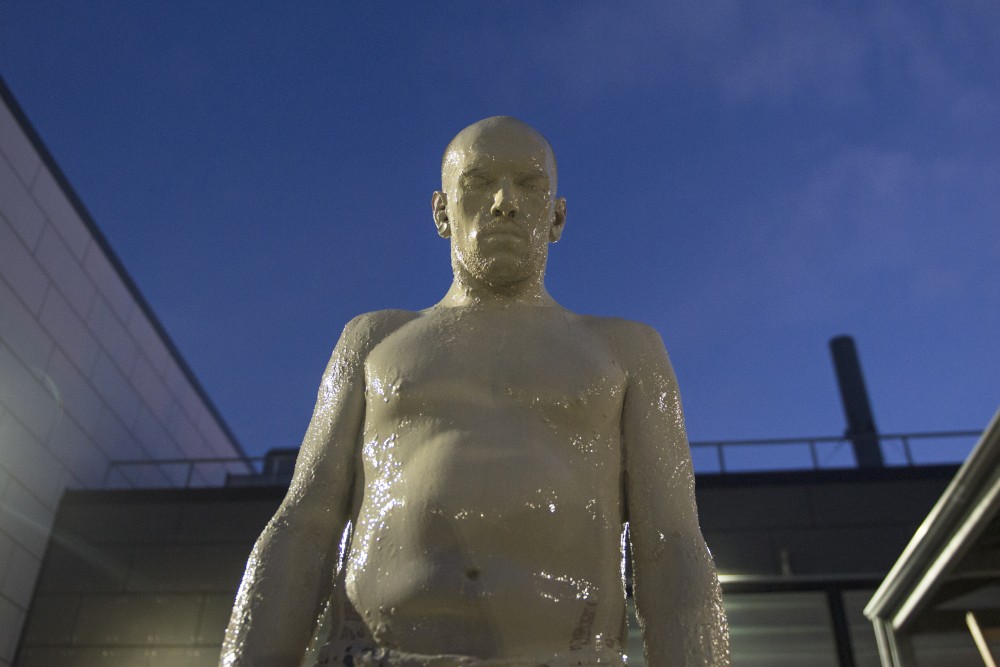 Derek Prescott covers himself in clay during a performance at the CLA's second annual Art's Quarter Festival on Wednesday, Oct. 11.

The night started off with a bang — or rather a multitude of them. A group dressed as a videographer, a bunny, a gorilla and a creepy-masked pig ran around 21st Avenue, clashing cymbals and throwing condoms at unwary Arts Quarter Festival attendees. It was evident that the festival had begun.

The College of Liberal Arts’ second annual Arts Quarter Festival took place on Wednesday night. The festival was put on in collaboration with the Department of Art, School of Music and Department of Theatre Arts & Dance. The event occupied the Barker Center, Ferguson Hall , Rarig Center and both wings of Regis. Live art, music and dance performances occurred simultaneously throughout the night.

“We started planning Arts Quarter Festival 2017 in … November 2016. This year we decided to put out an earlier call for submissions to try to get more artists, and it worked,” said Megan Mehl, events manager for CLA. “Last year we had about 50 artists and this year we have 150.”

As music drifted from the steps of Rarig, visitors meandered through the galleries and munched on snacks from the mac and cheese and tater tot food trucks parked outside. In the courtyard, audiences watched demonstrations including metalworking students pouring red-hot aluminum into molds and BFA student Derek Prescott repeatedly dunking his bare torso into a trash can full of clay.

Inside, festival-viewers could view works like the series “Intimacy and Loneliness,” by BFA senior Jaysen Hohlen. The black and white photographs were inspired by an article published in the Huffington Post called “The Epidemic of Gay Loneliness,” which highlighted how rates of depression, anxiety and suicide remain the same in the gay community, even though acceptance rates continue to rise.

“For me, the problems seem to be happening inter-culturally in looking at how gay men interact with each other and interact with the self as well.” Hohlen said. “I started interviewing and photographing gay and queer-identifying men in their homes and spaces. … Looking into it, the two main concepts that kind of arose from my interviews and from the research was this idea of loneliness and this idea of intimacy.”

The photos on exhibit were small in size and partially hidden under pieces of transparent rice paper with definitions, phrases and quotes taken from Hohlen’s interviews printed on top. The size and arrangement of the photos urged viewers to come close to read the words, and lift the paper to see the images.

“The majority of the work was trying to kind of start a discussion about this thing that’s happening because it’s so deeply personal,” Hohlen said.

The two seniors made a video prior to the performance, in which Brunette made screen-prints while Ogas danced, improvising her movements, which were inspired by the printing process. They ran the video on a blank wall and danced in front of it. It was the first time they produced a collaborative piece together.

“I think it’s pretty much a series of steps that were based off of each other’s [practices],” Ogas said.

The night was long and the event list even longer, giving visitors the chance to experience a myriad of artistic works and often to connect with the students who made them. After starting just last year, the festival is quickly becoming a vibrant staple of fall semester, and if this year’s event is any indication, it will only continue to grow.