The Gophers fell in four sets to No. 1 seed Penn State to end their NCAA tournament. 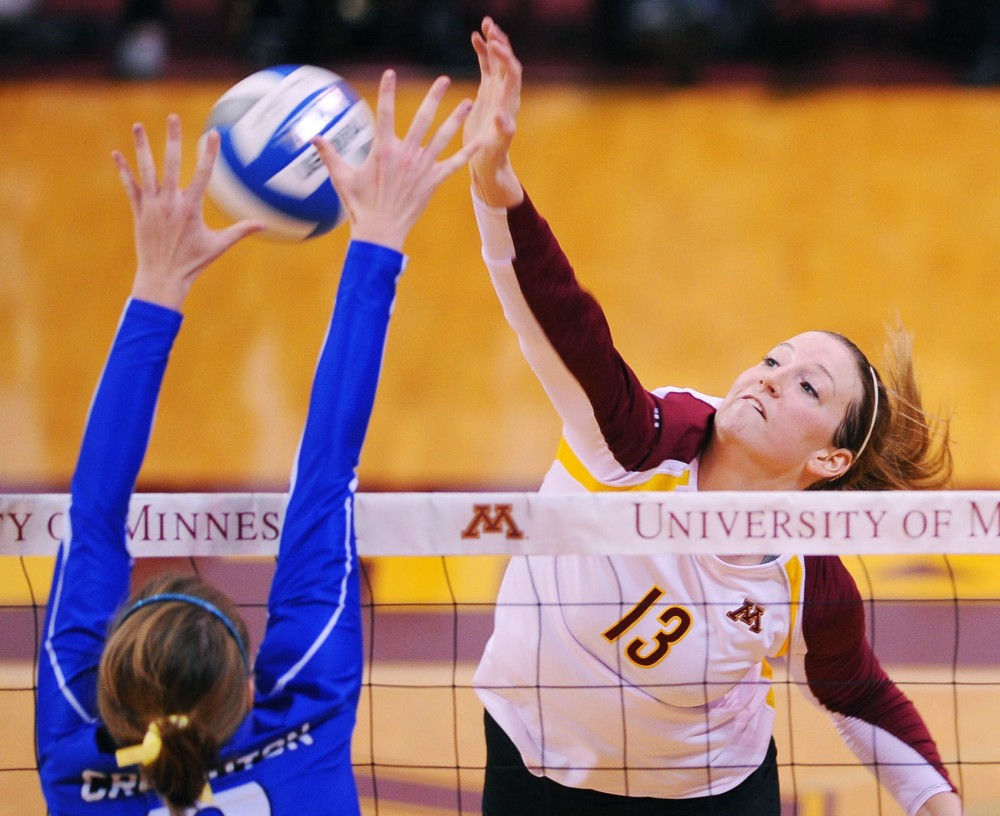 The Gophers had three chances to overcome Penn State this season.

And in their final encounter during the NCAA tournament’s Elite Eight round, Minnesota suffered the same result as it did twice in the Big Ten season — a loss.

In his first season at Minnesota, McCutcheon led the Gophers to a 27-8 record and a tie for second place in the Big Ten Conference. While the team graduates several key players this year, its future is in good shape with strong recruiting classes.

The Gophers dropped the first set 25-19 to Penn State before winning the second set with the same score line. But Penn State took the last two sets 26-24 and 25-18 to advance to the Final Four.

“[We’re] just kind of shocked that it’s over so quickly,” junior middle blocker Tori Dixon said. “We would think that we were going to … make it longer.”

Senior outside hitter Katherine Harms led the Gophers with 17 kills. Penn State’s Ariel Scott had a match-high 25 kills. Dixon and freshman outside hitter Daly Santana both had eight kills.

Penn State outhit Minnesota .237 to .177, but the Gophers’ block helped minimize the damage. Both teams had 14 blocks.

“I think the block and defense were the critical part of it for both teams,” McCutcheon said.

The Gophers’ blocking wasn’t consistent throughout the season, but Dixon said Saturday was a different story.

“We had our pin blockers lined up well, and the middle [blockers] did a pretty good job of closing and getting over,” Dixon said. “Overall, I think the blocking was on tonight.”

The Gophers endured a setback early in the crucial third set when junior outside hitter and captain Ashley Wittman left the match with an ankle injury.

Wittman said she went up to block Penn State’s setter Micha Hancock and landed on her when both players were coming down. She said she might have rolled her ankle but wasn’t sure what happened.

“I was really just frustrated because clearly I don’t want to be off the court,” Wittman said. “This was a big match.”

McCutcheon subbed Wittman out in favor of freshman outside hitter Karlie Hauer, who had seen limited playing time this season.

“That was a ton of pressure put on [Hauer],” Wittman said, “coming in and not having really played anything other than serving the ball.”

Hauer had four kills and two digs against the Nittany Lions. Dixon said Hauer didn’t let the team’s performance drop because of the injury.

“I think Karlie … did really well … especially stepping up into how big of a role Ashley plays on our team,” Dixon said. “When we were on, part of that was due to Karlie sometimes.”

Wittman taped her ankle and re-entered the match early in the fourth set.

The night before, Minnesota had rallied from a set down to beat Purdue in four sets and advance to the Elite Eight. But the Gophers weren’t able to overcome multiple deficits against the Nittany Lions.

“We are so proud of the season we had,” Wittman said. “We had a great team, and we had a great run, and a few points here and there could have totally made a difference in this match.”

While Wittman and the majority of the team’s starters will return next season, she said she will always wonder what this season’s team could have accomplished.

“We were just so close,” Wittman said. “And we fought so hard.”