Minnesota was on a 21-game winning streak against Minnesota-Duluth prior to this weekend. 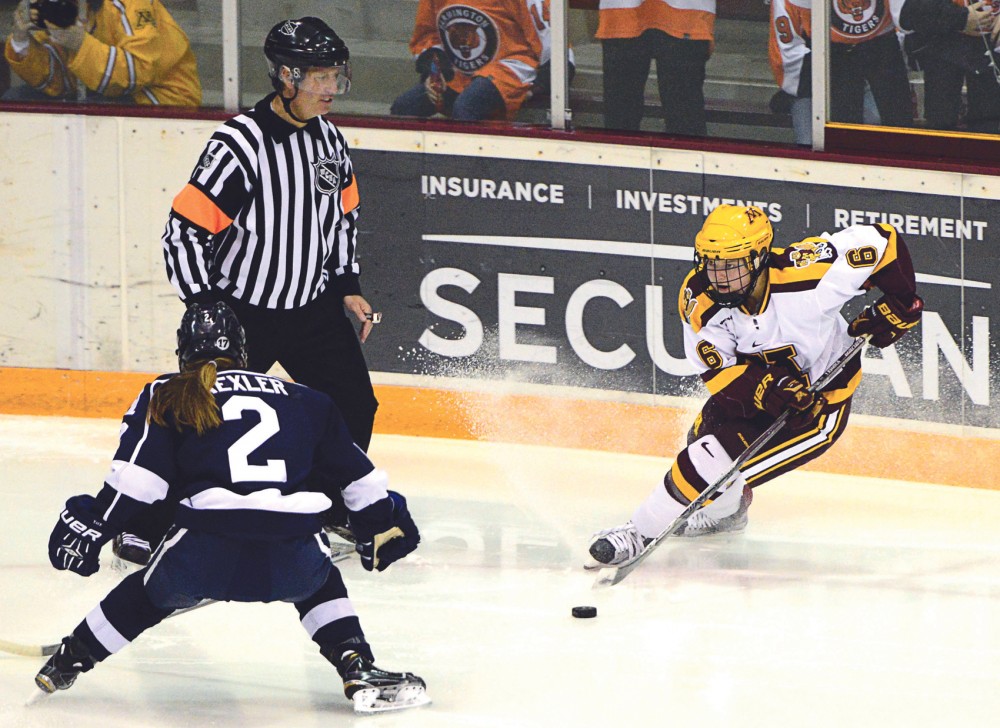 Gophers forward Kate Schipper maneuvers the puck away from Yale in Ridder Arena on Nov. 20, 2015.

Minnesota encountered a rough return to the WCHA on Friday and Saturday, and lost both games against Minnesota-Duluth 3-2 and 5-3, respectively.

The Gophers seemed like they couldn’t get anything going for themselves in their first game back, as the Bulldogs controlled the tempo of the entire game.

“[In the first game] for one reason or another we just didn’t play with a lot of passion,” said head coach Brad Frost. “We had a good third period, but it was too little, too late.”

The Bulldogs scored the only goal of the first two periods to take a 1-0 lead into the third period.

Forward Sarah Potomak tied the game up with the first goal of the third period at the 4:11 mark, only to have Minnesota-Duluth take the lead yet again less than a minute later.

Forward Kelly Pannek equalized the game again later in the period, but Minnesota-Duluth was quick to fight back with another goal.

The Gophers couldn’t answer for a final score of 3-2.

Pannek and Potomak both had two points, a goal and an assist each, while senior defenseman Megan Wolfe tallied an assist on the night.

The No. 2 Gophers (16-5-2, 12-4-2 WCHA) came out stronger in the second leg of the series, with Pannek scoring the first goal of the game, assisted by linemates Potomak and senior forward Dani Cameranesi.

“I thought [in the second game] we came out with a little better jump and went toe to toe with them,” Frost said.

The No. 4 Bulldogs (15-4-3, 12-4-2 WCHA) fired back quickly, scoring two unanswered goals to take the lead in the first period, before sophomore defenseman Sophie Skarzynski netted the equalizer to end the high power first period.

Minnesota-Duluth dominated the second period and added two more goals to assert themselves over the defending National Champions.

The game ended with the two teams trading a goal each, with forward Kate Schipper scoring her first goal of the series.

Pannek and Potomak again had two points in the game, while freshman defenseman Katie Robinson scored the first point of her career with an assist on Skarzynski’s goal.

Peters struggled to keep the puck out of her net, giving up five goals with 21 saves.

“We talked about it as a team, and I think their passion just surpassed our passion,” Schipper said. “Passion for the game, and passion for wanting to win. I don’t think we were as prepared as we could have been for both games.”

The team now has five losses on the season, which hasn’t happened since its 2011-12 campaign. The Gophers hadn’t lost to the Bulldogs since 2012.

“I think getting back on track is going to be huge,” Pannek said. “The great thing about this league is that you play two games one weekend, and two more the next, giving you the opportunity to bounce back.”