Tubby Smith led his new team to a 81-68 victory Sunday over his former program. 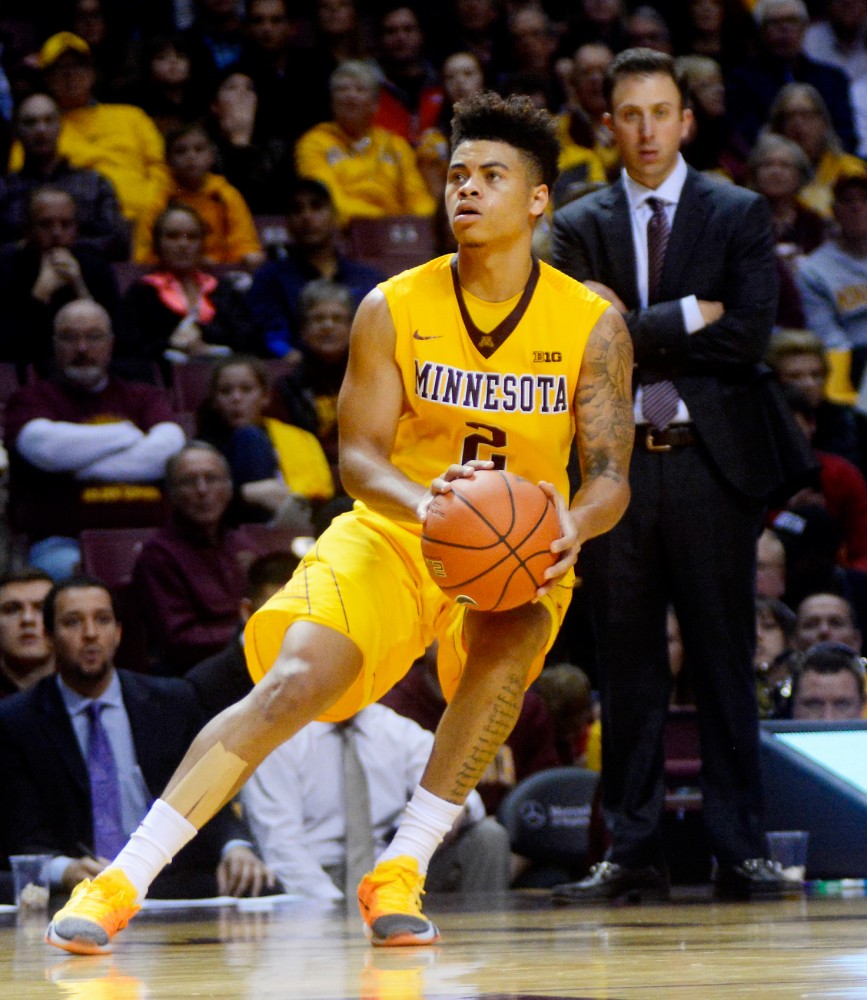 Gopher guard Nate Mason sets up to shoot during the second period on Nov. 13, 2015, at Williams Arena.

Ryan Falk
Members of the Gophers men’s basketball team saw a familiar face as they looked at the other sideline on Sunday afternoon.
Minnesota lost to its former head coach Tubby Smith 81-68 in the consolation final of the Puerto Rico Tipoff.
The Gophers (3-2) struggled from three-point range the entire game, shooting only 20 percent from behind the arc.
Texas Tech, known more for interior scoring, shot 40 percent from three-point range and outshot Minnesota overall.
The Red Raiders also had 40 rebounds to Minnesota’s 32.
Senior forward Joey King and senior guard Carlos Morris led the Gophers on offense, finishing with 15 points each.
Head coach Richard Pitino brought a different playing style to Minnesota when he took over for Smith.
“With Coach Pitino we get to play a must faster pace now than we did with coach Smith,” said Charles Buggs, the last Smith recruit left on the team. “It wasn’t as hard for me to transition from [Smith] to [Pitino].”
Gophers defeat Missouri State
Minnesota had its first victory of the Puerto Rico Tipoff on Friday, using the three-point line to beat Missouri State 74-69.
King led the team with 18 points, all coming from three-point range where he made six of seven attempts.
“He’s got great confidence, great belief that anytime he shoots it’s going in.” Pitino said last week. “He gets the confidence from working hard, and that’s where you should get it from.”
Morris and sophomore guard Nate Mason added 12 and nine points, respectively.  Morris and Mason hit big three pointers when Missouri State put together big scoring runs in the second half to make the game closer.
The Gophers started off the game shooting 14-21 but went cold after that, finishing the game shooting 45 percent.
MN loses to Temple
The Gophers dropped their first game of the Puerto Rico Tipoff, losing to Temple 75-70 on Thursday.
Minnesota went on a 17-2 run in the second half to rally back from a nine-point deficit, but Temple used a 15-2 run to close out the game and secure a victory.
“We were on an emotional high. Things were going great.  We were rolling,” King told reporters after Thursday’s game. “And then we had a few hiccups, a couple bad shots, stepped out of bounds a few times and we were never really able to rebound.”
The Gophers shot 38 percent and committed 11 turnovers against Temple.
Minnesota also struggled with fouls in the game, with 21 personal fouls called against the team.
Mason scored a career-high 20 points in the loss.
Delete Image
Align Left
Align Center
Align Right
Align Left
Align Center
Delete Heading