Students attached the codes to trees on the St. Paul campus last week. 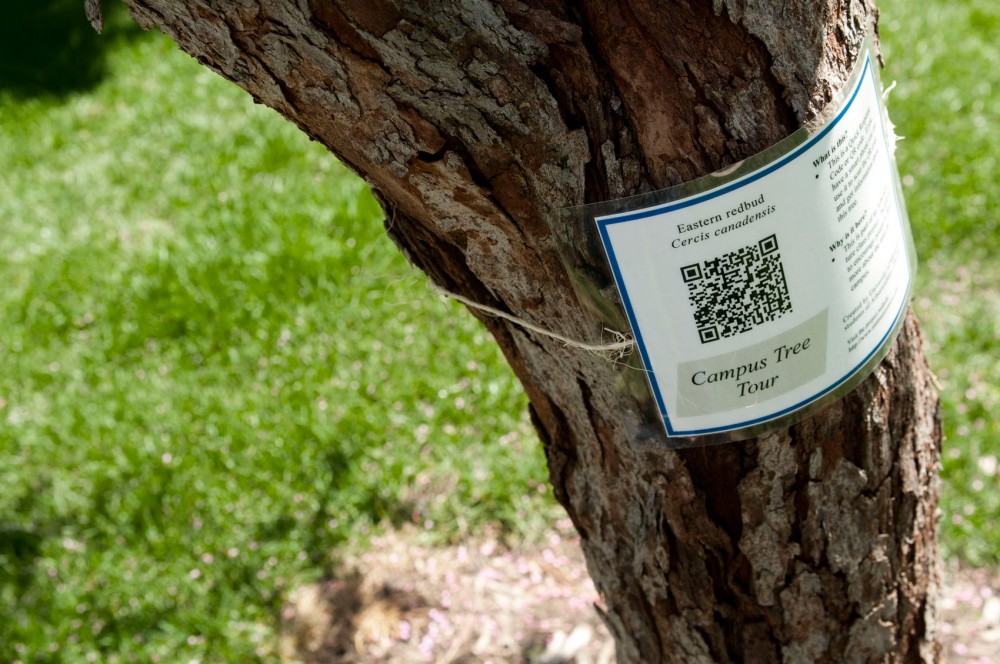 The Eastern redbud is one of thirty-four different species of trees the University of Minnesota arboriculture class has fitted with a QR code in St. Paul, Minn. The QR codes share interactive information about each tree when scanned by a smart phone.

A University of Minnesota forestry class is using QR codes to combine technology with nature.

Students labeled trees around the St. Paul campus Thursday as part of a research project for their arboriculture course. Signs with QR codes were placed on 34 different species of trees, allowing smartphone users to access information about the specific tree by scanning the sign.

Arboriculture is the study of how to care for trees and shrubs and what tree would be best for a particular site.

The project was created as a way for students to allow the public to find out about the trees on campus, said Eric North, a graduating senior and the teaching assistant for the class.

The students selected trees like the White Oak, the Sugar Maple and the Austrian Pine, which are most present on campus but only make up about 30 percent of the total species on campus, said Gary Johnson, the professor leading the class.

Johnson said this is the first time the project has been done at the University, and he’d like to expand it to the Minneapolis campus and the surrounding city parks.

The city of St. Paul, interested in the community outreach aspect of the project, asked Johnson to help set up the signs on trees at Horton Park for Arbor Day on Friday, North said.

But to expand the project further, Johnson needs to secure more funding. Right now the signs are made of laminated paper held to the tree by string.

Johnson said the project could help attract people to the campus and put students’ work on display to show prospective students what kind of work they would be doing.

Each of the 17 students working on the project was responsible for researching two different types of trees and then creating videos where they interviewed experts on their assigned species, North said.

Thursday afternoon, the students toured the St. Paul campus, presenting their research on the trees to their class.

Their research identified different aspects of the trees like defining characteristics, geographic origin, what its wood can be used for and what kind of insects and diseases present a danger to the particular species.

Greg Matthews, a horticulture major who presented the Austrian Pine, said he enjoyed working on the QR code project.

He said being able to access so much more information from a smartphone is better than a regular sign.

The project was assigned at the beginning of the semester, but the students didn’t start buckling down until the last two months, he said.

The students –– most of whom had no video experience — had to go out and interview researchers and edit the video themselves, he said. But it wasn’t that difficult, he said.

The students were the ones who did all the work, Johnson said.

“Basically I’m just running as fast as I can to keep up with the students,” he said.