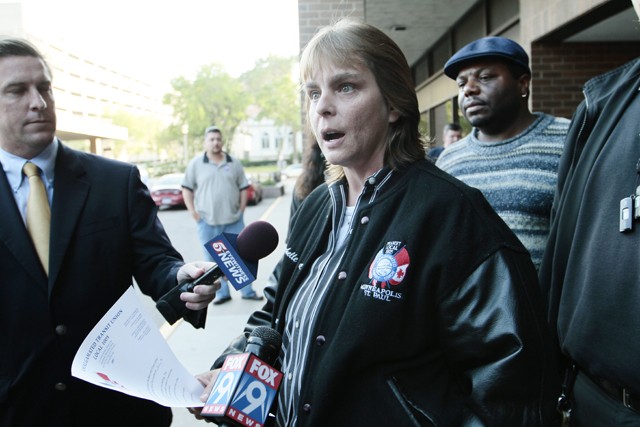 ATU Local 1005 President Michelle Sommers announces that its members have voted not to accept MetroTransit’s final contract offer Monday outside the union’s office. If an agreement is not reached drivers could vote to strike.

The union representing Metro Transit workers voted down the latest contract offer Tuesday evening, setting up a possible strike for Metro Transit bus drivers.
Even though this was Metro Transit’s final offer, Michelle Sommers, president of Amalgamated Transit Union Local 1005, said the union would go back to the negotiating table. Workers have not yet voted on a strike, but if negotiations break down, it is a possibility.
If they do strike, it would shut down all Metro Transit buses throughout the city, Sommers said.
The union voted 61 percent to 39 percent to turn down the offer, she said.
“This vote shows the frustration of the members,” she said. “The workers have earned every nickel they make, straight or overtime, and they’re not willing to take money out of their pockets.”
The contract included wage and benefit freezes, more money out of pocket for health care and higher co-pays, Sommers said. She would not specify how great the increase would be.
Sommers added that she wants to get this done as quickly as possible not only for the union members, but also for the public who use Metro Transit to get to work, school and general travel.
On an average weekday, customers board Metro Transit buses and trains 250,000 times, according to the organization’s website.
“We want to get this done for [the public], we know the service we provide and that people depend on that … so our goal is to get it done for them,” Sommers said.
On Aug. 23, 98 percent of voting union members rejected the first offer by Metro Transit.
The offer included similar freezes on pay progression and health-care cost increases, Sommers said.
Metro Transit and the Metropolitan Council did not answer multiple calls for comment by the time of publication. The Met Council controls Metro Transit, bus, light-rail and other services throughout the metro.
ATU Local 1005 last went on strike in 2004, after it was unable to reach contractual agreements with Metro Transit.
The strike lasted 41 days and caused a halt to public transportation. Ridership suffered after services resumed.
The University of Minnesota is watching negotiations and has no plan in place at this time should the union strike, said Jacqueline Brudlos, a spokeswoman for University Parking and Transportation Services.
The University had a plan during the 2004 strike. Should the union carry out with a strike, the University would likely have a similar plan, though specifics were currently unavailable, Brudlos said.