Penn State jumped out to a 17-0 lead and never looked back. 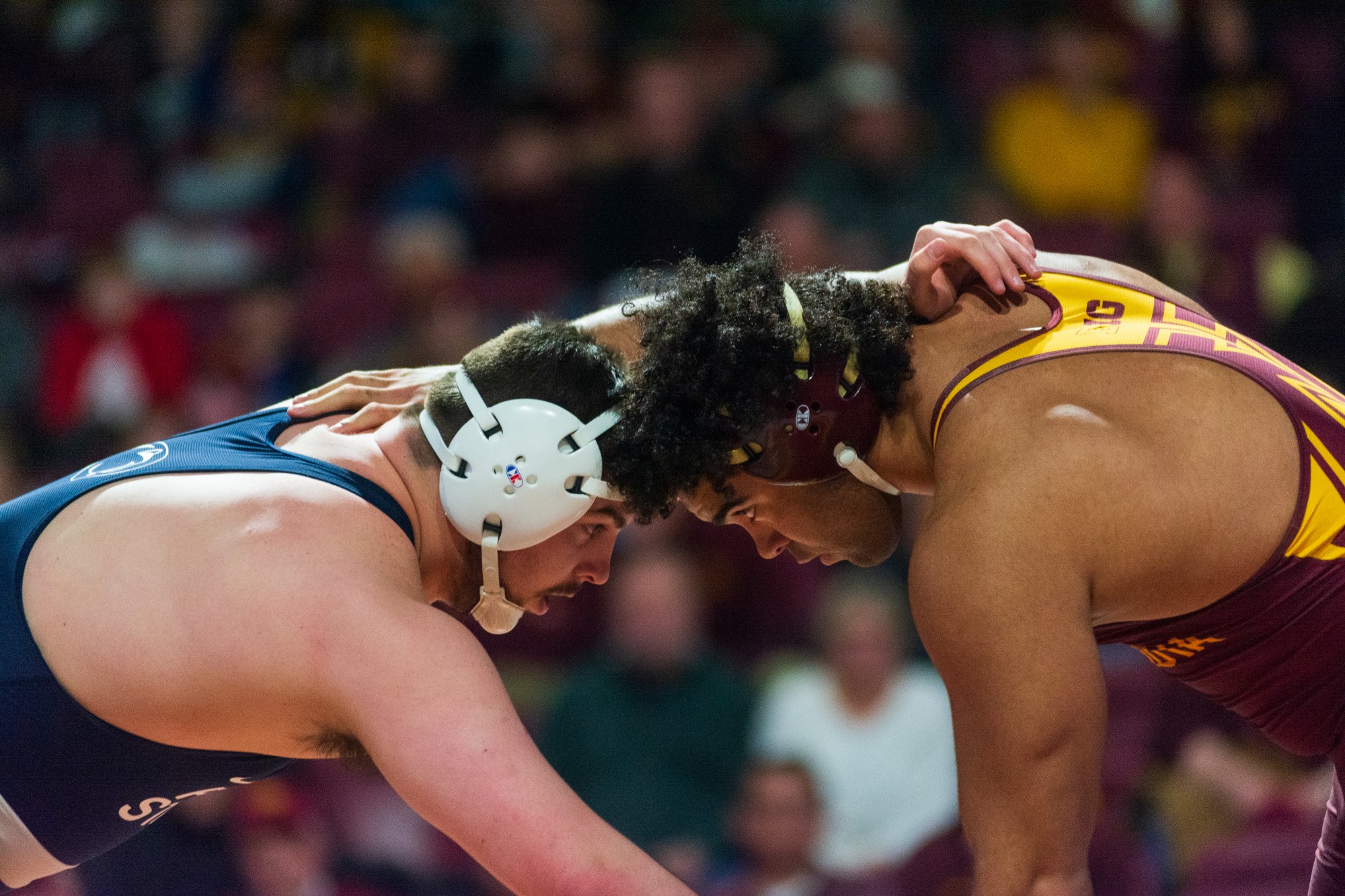 Gophers Sophomore Gable Steveson faces off with his opponent at Maturi Pavilion on Sunday, Feb. 9. The Gophers lost to Penn State 31-10.

It’s always difficult facing top-ranked teams like the Gophers’ wrestling team did on Sunday against No. 2 Penn State. It’s even more difficult when you’re forced to compete without one of your top-10 wrestlers.

Before anyone even stepped on the mat in Penn State’s 31-10 route of Minnesota, the Gophers were fighting from behind. With the dual starting at 125-pound weight class, Minnesota was quickly down 6-0, taking a forfeit with No. 10 Patrick McKee still recovering from an injury sustained in the dual against Purdue. After losing in a major decision at 133 pounds and a pin at 141 pounds, Minnesota found themselves in a 17-0 hole against one of the best teams in the country. But, the Gophers fortunes turned around at 149 pounds.

Trailing 3-0 with just over a minute left in the third, redshirt freshman Brayton Lee made a late rally, landing two takedowns and tying the match at five by the end of the period. In sudden victory, he quickly landed another, notching the 7-5 decision for the Gophers’ first win of the day. Minnesota was on the board, trailing 17-3.

“You just tell yourself to keep scoring the next point, keep having fun and try to stay grateful,” Lee said. “I mean, there’s no reason to get down just because you’re down.”

Lee’s match was reminiscent of his performance against Purdue where he also came on late in the third and won in sudden victory.

“When you get in a hole sometimes you just got to find a way and it turns out to be pretty exciting,” he said, adding coming from behind wasn’t part of the strategy.

Following Lee’s victory, 157-pound redshirt freshman Ryan Thomas won another tightly contested match. Tied 3-3 in the third, Thomas landed his first takedown of the match, giving him a 5-3 advantage. He held on the rest of the way and secured the 5-4 decision. After back-to-back wins, the Gophers still trailed 17-6.

Momentum was starting to build for Minnesota, but the spark was quickly put out by the Nittany Lions. Penn State won the next four matches, clinching the dual after a victory at 184 pounds. At 197 pounds, redshirt freshman Garrett Joles nearly upset No. 16 Shakur Rasheed, but fell short 6-5.

Minnesota finally saw another win when top-ranked heavyweight Gable Steveson took the mat. Steveson took down No. 16 Seth Nevills in the first, scored on an escape in the second and landed four takedowns playing catch and release in the third to get the 13-5 major decision.

“That’s kind of our overall feelings, a little too much respect I think in some of the weights, start earlier if you feel you got the guy on the run. If you want to win the match you have to get after those points earlier,” said head coach Brandon Eggum.

The Gophers have another tough contest ahead on Saturday, Feb. 15 when they travel to Iowa City to take on the top-ranked Iowa Hawkeyes.