Areas of University of Minnesota operations have been restructured for efficiency. 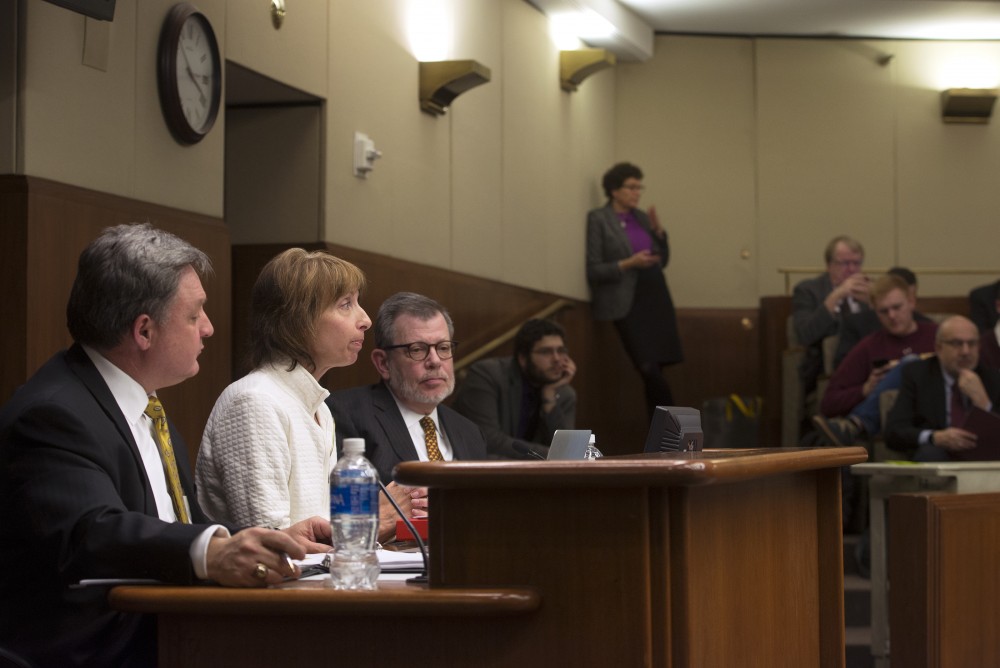 Brian Burnett, Julie Tonneson and University President Eric Kaler present to the House of Representitives' higher education committee about the University's impact on Minnesota at the State Office Building on Tuesday, Jan. 24, 2017.

The University of Minnesota is undergoing significant changes to make its administrative structure more efficient.

The school is currently searching for a new vice president of information technology, who will inherit a department that has gradually become more centralized under University President Eric Kaler’s plan to cut administrative costs $90 million by 2019.

The consolidation effort is part of a trend across other large areas of University operations, like finance, University Services and Government and Community Relations.

“It really represents an opportunity on my part … to look at some other ways to organize my management team that enables them to be more effective and to function well,” Kaler said.

Many areas of school operations, including smaller colleges and departments, have eliminated IT positions or shifted them to the University’s central IT department in an effort to become more efficient and save money.

“Our IT provides the backbone and the connectivity for not just this campus, but the other campuses and the university operations state wide,” said Senior Vice President for Finance and Operations Brian Burnett. “[Consolidation] can bring some organizational effectiveness and efficiencies together in the support services piece.”

Burnett said he hopes the search committee for the new VP of IT will begin interviews candidates in early May, and make a final decision by the end of the spring semester.

Consolidation of Finance and University Services

Burnett’s position itself — where he oversees IT, human resources, finance and University Services, which each had their own vice president previously — is new, and was created by Kaler in March.

“It reduces the number of direct reports to the president, allowing him to focus on some other strategic issues for the University,” Burnett said.

Kaler added that the administrative restructuring was done without adding staff.

Burnett said there are many opportunities for alignment between finance, HR, IT and University Services.

“I think that what a world class research University should expect … is world class support services,” he said. “That doesn’t mean the most expensive, because every dollar we spend is a dollar we don’t spend on our mission.”

Restructuring of Government and Community Relations

The University’s Board of Regents voted in February to appoint former president and CEO of the St. Paul Area Chamber of Commerce, Matt Kramer, to head the newly-formed position of vice president for University and government relations.

Along with Kramer’s appointment, the board voted to restructure University relations, combining lobbying, public relations, marketing and community relations under Kramer’s leadership.

“It’s just a good idea to have one person responsible for our outward-looking part of the University,” Kaler said.

Kramer said his new position is about continuing to find how best to amplify the school’s influence and brand and its impact on the region, state and country.

“It’s this constant cycle of how best do we extend our influence, limited resource, maximum amplification,” he said.

He said while his new position encompasses messages to legislators, state and national resident and community members in both the Twin Cities, and communities around system campuses, the school isn’t trying to send out a single, unified message.