Minnesota scored four goals in the final five minutes, leading to an overwhelming win at home. 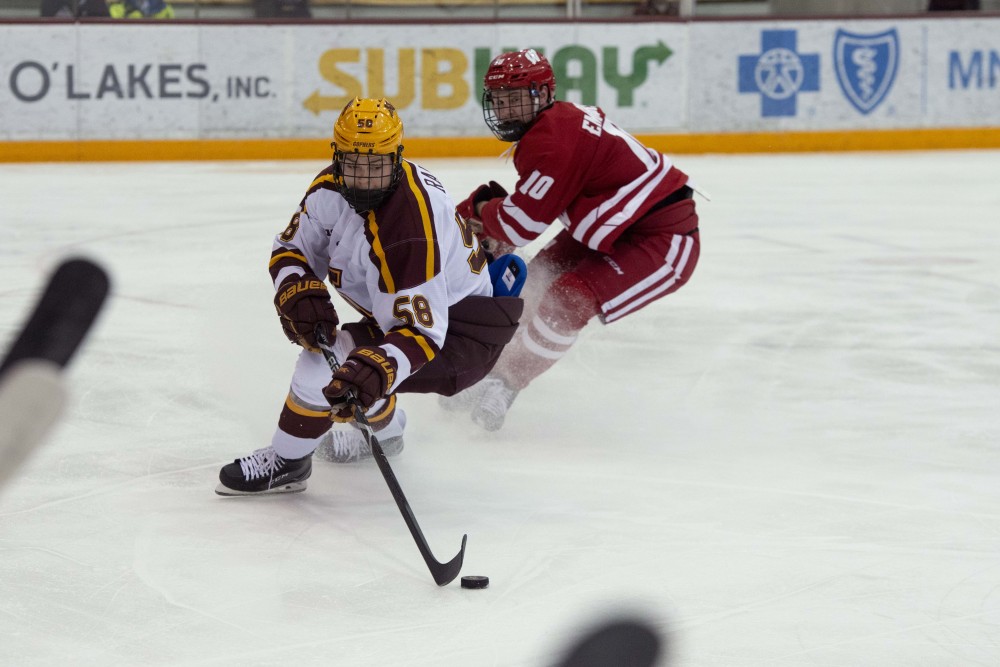 Freshman Sampo Ranta keeps the puck away from Wisconsin on Friday, Jan. 25 at 3M Arena at Mariucci.

The Badgers trailed 5-4 with under seven minutes remaining in the game. The mood in 3M Arena at Mariucci was a far cry from what it was after the Gophers took a 3-0 lead in the first period and made the Badgers pull their starting goalie.

“At 5-4, they score, they win,” said Minnesota head coach Bob Motzko, referring to the emotional path the game was headed down.

Then, Wisconsin (8-11-4) took a too many men penalty with 6:18 left to play. Gophers forward Tommy Novak received a pass from Tyler Sheehy near the blue line and fired a wrist shot. The shot smoked the top corner and went in, sparking a barrage of Minnesota goals.

By the final buzzer on Friday night, Minnesota (10-10-4) beat Wisconsin 9-4. Though the score proved a convincing victory, Motzko didn’t see it that way.

“We weren’t real good tonight,” Motzko said. “We were opportunistic tonight. It’s hard to say when you score nine goals, but territorially our goaltender kept us in. We were sloppy.”

Though the Gophers were outshot 46-28, it wasn’t the most important stat of the night. Minnesota scored four goals in the last five minutes to take the victory over rival Wisconsin. Freshman forward Sammy Walker scored two of those goals and Novak and Brent Gates Jr. scored the others. Walker took a stick to the face after trying to celebrate his first goal when an angry Wisconsin player tried to break his stick on the goalpost. That player, Linus Weissbach, got a high sticking penalty for it, and Minnesota scored again 14 seconds later.

“I think we just got some good bounces, and they started to go in at the end. And then once a couple went in we just started putting them on,” Walker said. “It’s definitely good scoring, and it makes you feel good. Just against the Badgers it’s pretty special.”

The Gophers were swept last weekend at Michigan State, and were looking to get some redemption against a Wisconsin team that sits at the bottom of the Big Ten. To start things off, the Gophers scored three goals on nine shots in the first period. Gophers defenseman Jack Sadek opened up scoring by going top-shelf off the pipe and in on the first Wisconsin goalie Jack Berry. Then, Sheehy scored on the penalty kill and forward Rem Pitlick scored on the power play late in the first period.

“Two losses last weekend, not happy with the way that we played until really the third period,” said Sheehy, who led the team with four points Friday night. “But like I said, it’s great to put nine on the board. We definitely needed it, and it’s great for going into tomorrow night, we have a little bit of momentum.”

The Badgers slowly scratched back, scoring one unanswered goal in the second period before they scored three more goals in the first 13 minutes of the third period. Minnesota skaters Ryan Norman and Brannon McManus scored during that span to keep the lead for Minnesota.

Minnesota will play Wisconsin again on Saturday at 7 p.m. at 3M Arena at Mariucci. The Gophers will celebrate the 1979 national championship team that played under head coach Herb Brooks before many of the team’s members, Brooks included, went on to win gold at the 1980 Winter Olympics.

“I don’t know if I want to bottle [up the excitement around the celebration],” Motzko said about keeping the emotion down on Saturday night. “Let’s use it. Let’s get out there and play tomorrow.”