The Stress of Her Regard to play Aria

Local indie-rock band re-invents themselves with half the members and a simpler sound. 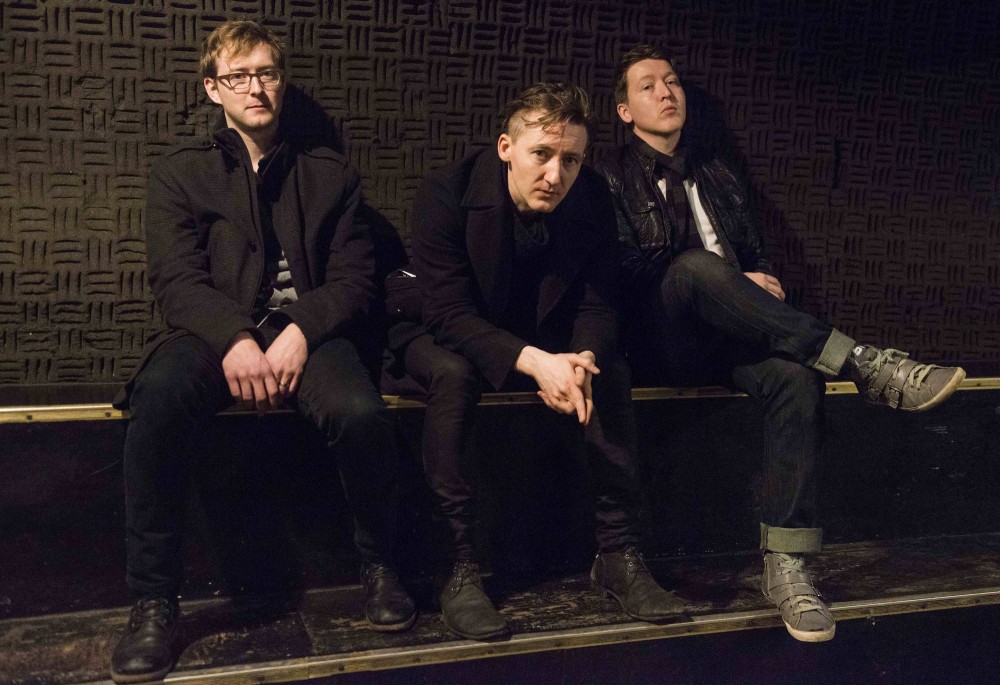 The Stress of Her Regard poses at 7th Street Entry on Friday afternoon. The trio are former members of the indie-rock band Idle Hands.

Though days for the band Idle Hands may be over, the Stress of Her Regard rose from the group’s ashes.

The members in the indie-rock trio were half of the Minneapolis band, Idle Hands. The Stress of Her Regard’s stripped down sound takes on a simpler style, but it still has the reverb-y, feedback quality that oozes Brit-rock allure.

“This is a lot more collaborative. We write together [now]. But in Idle Hands, I would pretty much bring the band songs, and we would figure out everybody’s parts,” guitarist  Ciaran Daly said. “It feels really natural. I’m always skeptical if someone makes art by committee; we definitely don’t make anything by committee. It’s more like a conversation that just flows really well.”

Daly grew up playing woodwinds, but traded them in for what he thought was an electric guitar. It turned out to be a bass.

“Once I got to be in high school I was like, ‘[Expletive] that! I’m not going to be in band and play clarinet, Mom!’… I was like, ‘I’ll get the cool one with four strings,’” Daly said.

Younger brother and bassist Criostoir Daly said he wanted to learn bass because it was what his older brother was playing.

“He was like, ‘Hey let’s play in a band!’ and I was like, ‘No. Not going to happen; it’ll be like the Gallagher Brothers, and we’ll be yelling at each other all the time,’” Ciaran Daily said. “But it ended up being the best thing I ever did.”

After Idle Hands stopped making music, the Daly brothers struggled with the fact that they weren’t performing like they had been in the past, and they were having an even harder time trying to find a drummer who they got along with.

The brothers performed together with an 8-bit drum sound app before former Idle Hands drummer Eric Wilson joined the group.

“We knew we already got along,” Ciaran Daly said. “We watch Sherlock together and drink scotch at his house.”

Though cutting the band in half and performing with a new identity was a huge leap for the trio, Ciaran Daly said it was easier and more natural than they had imagined.

The musical like-mindedness and the members’ natural chemistry and talents helped in the process.

“I’ve been in situations before where band members sing backup vocals, and they’re hitting all the notes, but you put the two voices together and you’re like, ‘God almighty! What the [expletive]? That sounds so stupid!’ It’s totally unpredictable what two people’s voices are going to sound like together, but we just [sound right],” Ciaran Daly said.

“A song will literally start playing in your head, and you’ll be like, ‘I haven’t heard that before, that’s new. A lot of times you’re hearing the verse, the chorus, everything, in your head. It’s crazy — like a radio antenna,” Ciaran Daly said. “You’ll just be minding your business, and then you’ll be like, ‘Shit! I was just taking a shower, but now I got to find my guitar!’”

And they don’t overthink music either.

“We don’t go to a point of over-writing any song. There’s a sort of inherent life to every piece,” Wilson said. “You can’t smother it.”

What: The Stress of Her Regard with New Politics, Banks and K. Flay
When: 8 p.m. Thursday
Where: Aria, 105 N. First St., Minneapolis
Cost: Invite only