Anti-climatic, but a climax nonetheless. 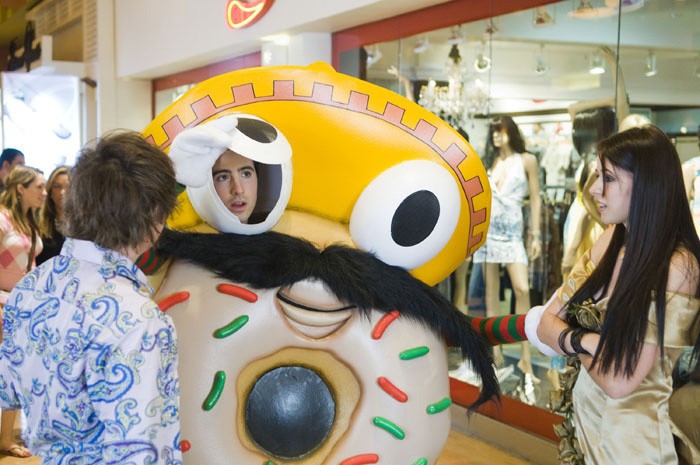 âÄúSex DriveâÄù Directed by: Sean Anders Starring: Josh Zuckerman, Amanda Crew, Seth Green, James Marsden Rated: R Playing: Area Theaters Virginity. Parents and religion tell us to hold onto it until marriage, while the media and clichÃ©d high school jocks everywhere encourage its rapid loss. In the vein of âÄúAmerican Pie,âÄù âÄúWeird ScienceâÄù and âÄúSuperbad,âÄù âÄúSex DriveâÄù is yet another film about a virgin’s self-conscious attempts to end the adolescent confusion and torturing curiosity of gettinâÄô none and just, as our film’s hero says, âÄúget it over with.âÄù The plot follows Ian (Josh Zuckerman), a regular high school senior who spends his evenings wandering around the mall dressed as a giant doughnut, handing out coupons and not getting laid. He’s resorted to online dating and finally decides to trek cross-country with his best friends Felicia (Amanda Crew) and Lance (Clark Duke) in a âÄò65 Pontiac GTO he stole from his crazed, homophobic brother Rex (James Marsden). The trip is a planned delivery of Ian’s V-card to a gorgeous babe he met over the Internet, not-so-cleverly screen-named Ms. Tasty. As expected, the trip hardly goes as planned and the crew winds up fighting crazed hillbillies, partying with an Amish but still sarcastic Seth Green and jamming with the douches from Fall Out Boy. The underlying premise is similar to coming-of-age novels and films galore. Teenage desperation and the constant desire to fall into line. Further, these films all ask: how many awkward silences and inadvertent nudity scenes can we squeeze into 90 minutes of uncomfortable viewing pleasure? âÄúSex DriveâÄù is no exception, but its clichÃ©s are punctuated by sobering sincerity. Zuckerman’s Ian is an excellently accurate version of today’s self-conscious nerd. Sure, he’s interested in the mechanics and pleasure of sex, but he continually backs down from offers that present themselves throughout the film. In many ways, âÄúSex DriveâÄù is underwhelming. The script isnâÄôt particularly moving or insightful, and the appearance of Fall Out Boy mashes any street credit the film had managed to build, but the castâÄôs chemistry overcomes these obstacles âÄî not phenomenally âÄî but overcomes them nonetheless. The film’s multiple side characters, Green and Marsden especially, deliver dimension to the story. Green’s uncomfortable cynicism is perfectly refreshing and Marsden is continuously spot-on, with draining amounts of testosterone and energy levels higher than a chihuahua after a venti frappaccino. Over the course of the film, âÄúSex DriveâÄù delivers exactly as expected, 90 minutes of raging hormones and unbearable awkwardness, but the film’s energy, honesty and disastrous finale help it transcend the trite âÄúcoming of ageâÄù syndrome continually plaguing this theatrical generation. The result is nothing particularly ground-breaking or spectacular, but it does manage to make itself worth a Friday evening.