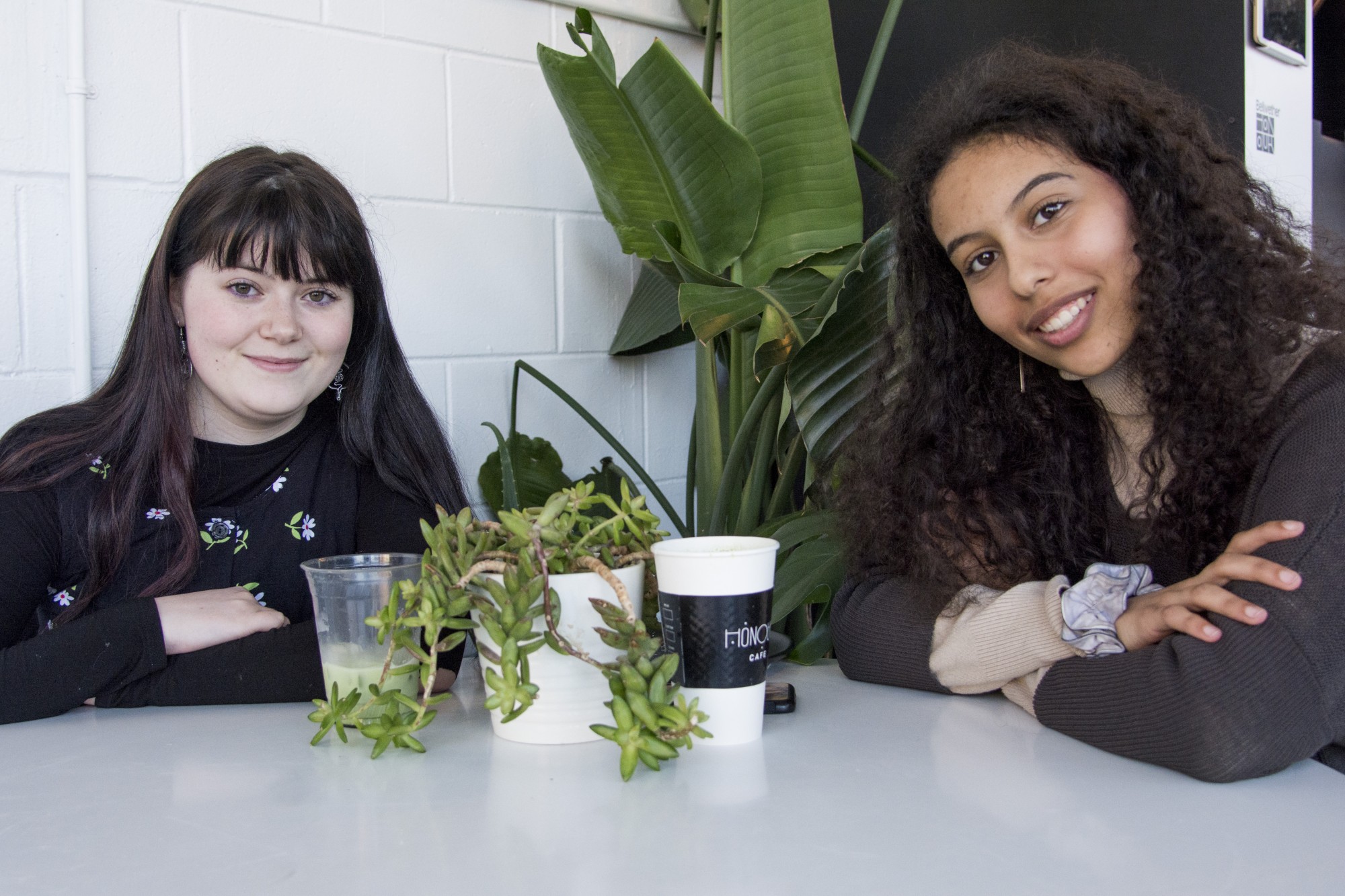 Frankie Miller, left, and Sophia Balabanova-Gebreab, right, the creators of Kaleid Zine, pose for a portrait in Honour Cafe on Saturday, Feb. 22.

With an Instagram feed as bright and lively as they are, Sophia Balabanova-Gebreab and Frankie Miller are in pursuit of a platform for young artists.

They’ve curated and created themes and colors, bands and poets, photographers and illustrators, all in one place — Kaleid Zine.

Kaleid, short for kaleidoscope, was created during their junior year of high school. Miller and Balabanova-Gebreab, now seniors at the St. Paul Conservatory for Performing Artists, were acquaintances who shared a class together before eventually realizing they both wanted to start a zine.

“I was submitting work to this other zine at the time and nothing was happening with it,” Miller said. “I was just like, ‘I wish that I could see it come to fruition.’ And then we were like, ‘Wait a second, why don’t we just make a zine together?’”

On March 8, 2019, they got to work. They spent 16 hours on FaceTime that week, planning, designing and creating spreadsheets. As students at SPCPA, they had access to a large number of young creatives.

“We have a ton of really amazing artists around us and initially, we weren’t sure what the idea of the zine would be,” Balabanova-Gebreab said. “We just wanted to have a platform to share that with the world before we go off to college and leave the community.”

Since then, they’ve produced two issues and developed a space for the young creatives who they know and support.

“I’m really moved and motivated by what they’re doing because it brings such an awareness in such a cool way,” said Isa Ajpop, a dancer who has been featured in the zine. “It’s a great step for the arts community to be able to recognize young artists.”

Miller and Balabanova-Gebreab quickly found themselves learning design and planning skills and realizing that more goes into making a zine than they thought.

“We had to ask for a lot of help from our friends and our peers,” Miller said. “We had to do a lot more outsourcing for things.”

The process has been a learning curve for them, as they began making their initial page layouts on Google Slides, but they’ve transformed themselves from high school students to businesswomen.

“I got to see it be built from the ground up,” said Millie Fotsch, a writer featured in the zine. “It became this tangible thing that stemmed from an idea that two of my very good friends had, and they’ve worked so hard making a publication as two teenage girls. It’s impressive.”

Kaleid is unapologetically girly and young. The colors are bold, and the design is, simply put, fun and youthful. Collaged letters are pasted on almost every photo with heart and butterfly stickers. It represents an authenticity that some rarely see on social media.

“An aesthetic that we’ve been working on is sort of like a feminine touch,” Balabanova-Gebreab said. “There’s a lot of pinks and a girl-punk style and we find those things really cool and inspiring.”

The two took a hiatus since last September to explore what they wanted to do with the zine and focus on their senior year of high school. Kaleid will be making its comeback this month and donating a portion of the profits to Black Rainbow, an organization in Australia that focuses on supporting LGBTQ Aboriginal people.

“I’ve been approached so many times with people that are so excited about the zine,” Miller said. “There’s so much love for it, and it feels so good to be a part of something that makes your community stronger because people like it so much and they feel good about it.”