Captains leading the way for Minnesota track and field program

The leaders for the maroon and gold are veterans, and they’ve seen it all during their time at Minnesota. 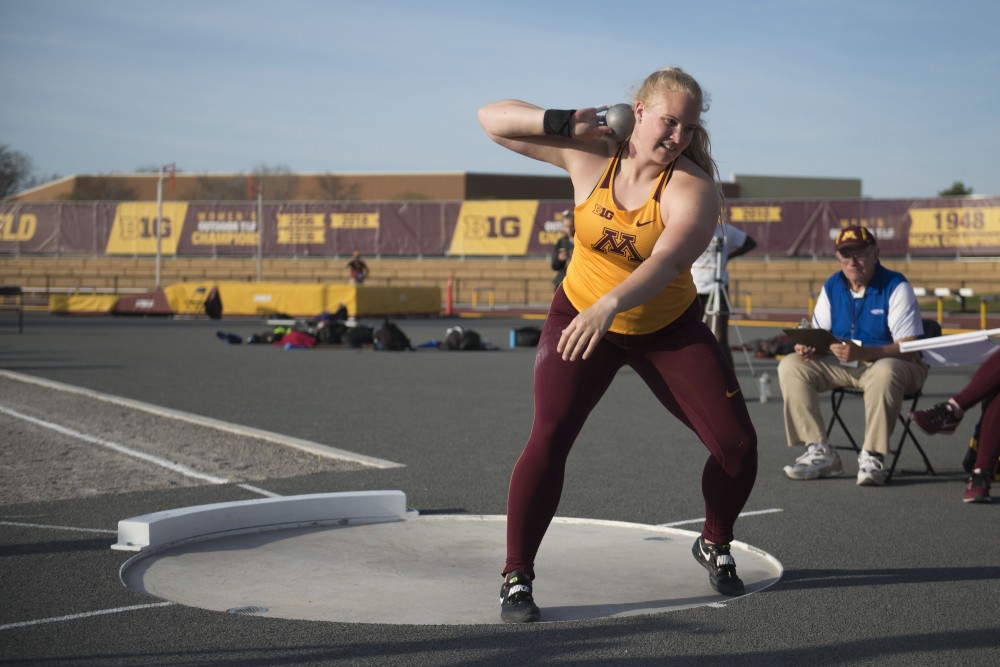 Redshirt senior Kiley Sabin winds up to throw at the Minnesota Track & Field Stadium in Minneapolis on Wednesday, April 24.

Upperclassmen Temi Ogunrinde and Rachel Schow are leading by example for this year’s Minnesota track and field team.

Both captured event titles recently at the Stanford Invitational meet, and they’re making an impact on the team in other ways alongside other leaders.

“A lot of times over the years, those girls start to really understand what success is, they own it, they push to achieve it and they kind of know how to get there. So that’s what I feel like they’re doing now,” said head coach Matt Bingle.

Fifth-year senior Kiley Sabin said that between the nine captains from the men’s and women’s side, they all push each other to get better and work together as leaders. While age does not entirely determine leadership, it does help establish that role.

“That’s something that’s really been different this year, when we think of leadership, they’re really looking to the older kids even more than last year,” Ogunrinde said. “That was a new role to take on that I’m really grateful for.”

Ogunrinde said that when she began on the team, her freshman class was 26 members strong. It’s now down to four women in the group’s fifth and final year.

“It’s kind of bittersweet with the girls we have now — we’ve come such a long way,” Ogunrinde said. “The fifth year is different because we’re missing … a lot of the girls we started with.”

Ogunrinde is not the only fifth-year senior captain for this program. Sabin is also in her fifth year and is completing a degree in human physiology.

“I wanted to have my fifth year as a year that I could focus a little bit more on track,” Sabin said. “Physiology has been a very rigorous major, so it’s been a lot to carry both the major and do track.”

Similarly, captain Patty O’Brien came back for a fifth year because she said she had unfinished business.

While she finished her undergraduate degree and her master’s program in four years, O’Brien said she wanted to return to the team because it’s special to her. She received a degree in elementary education and her teaching license and was ready to start teaching. But, she said, there was limited time she could compete athletically in college.

“Being a freshman, I would always look up to all of the captains. I never pictured myself in a captain position for the track team just because it is such a large team and there are so many great people who can lead this team,” O’Brien said. “It’s a great privilege and an honor to be named a captain because there are so many hard workers and dedicated athletes that strive to be the best that they can be.”

With an abundance of experience leading the way, the Gophers hope they will be able to lean on their captains and win big at the outdoor Big Ten Championships meet from May 10-12.

“The goal is always to keep improving and do better, and since this is my last year, the phrase ‘last one, best one’ really applies here,” Ogunrinde said. “I’m just hoping this can be my best one yet.”