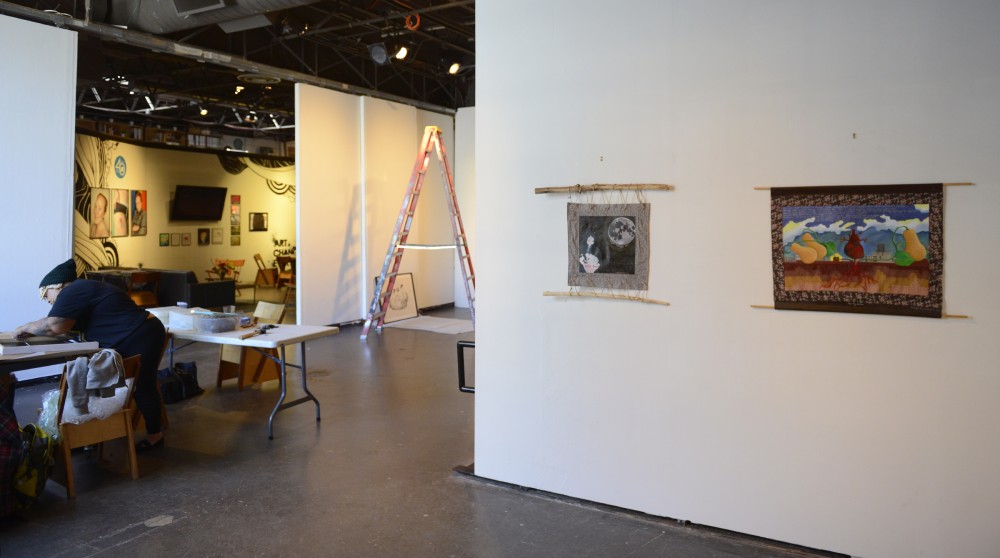 Joy Spika prepares to hang a frame for the "Skins" exhibit at Intermedia Arts Center on Monday, Oct. 10, 2016. The exhibit explores themes of Native American identity and multiculturalism in America.

A new exhibit at Intermedia Arts entitled “Skin(s)” explores the identities of the Dakota, Ojibwe, Ponca, Lakota, Navajo and other indigenous nations through a variety of mediums — performance, film and online media.

“The ‘Skin(s)’ project was inspired by my desire to give more visibility to Native American people,” dance producer and director Rosy Simas said.

Simas, exhibit curator Heid E. Erdrich and Ojibwe filmmaker Elizabeth Day traveled to San Francisco and Chicago to interview American Indian people about their stories — these accounts and images are part of the exhibit’s film and dance performance.

“When I was coming up with the concept for the exhibit, one thing became clear from the beginning,” Simas said. “We were going to make sure that a diversity of Minnesota native artists and many different nations would be included. Not just the natives who have historically called this place their territory but those that are here now and belong to our community.”

More than 30 artists are involved in the project. A visual arts exhibit will be at the center of the project until the beginning of November. A dance performance choreographed by Simas will also be presented later this month.

“Like the work in the exhibit, this is my contemporary art expression of my identity,” Simas said. “I’m interested in how we see skin — what we hold, hide or reveal.”

How each medium interacts with the others is integral to the integrity of the exhibit’s message.

“Different types of artists provide an opportunity to tell many sides of the same story,” Simas said. “Different media complements each other and help bring diverse voices together.”

Simas has been involved in the performing arts since she was 13. For more than 20 years, she has been creating work that deals with a wide range of political, social and cultural subjects from an American Indian feminist perspective. She is a part of the Seneca Nation of Indians’ Heron clan.

Erdrich, who is Ojibwe, is an author of seven books, including her latest, “Curator of Ephemera at the New Museum for Archaic Research,” and is in the MFA program at Augsburg College.

“I am an advocate, teacher, curator and mentor to other Native artists and artists of color,” Simas said.

Intermedia Arts’s exhibit is particularly focused on connecting the performers and the audience with the words and art of American Indian people.

“‘Skin(s)’ is unique because it’s a project that is getting at a particular subject matter from different angles in order to reach people with different interests,” Simas said. “It’s an abstract, sensory-based dance performance and a visual exhibit of artists from different disciplines.”