In her first year on the team, the junior has already helped the Gopher clinch several wins. 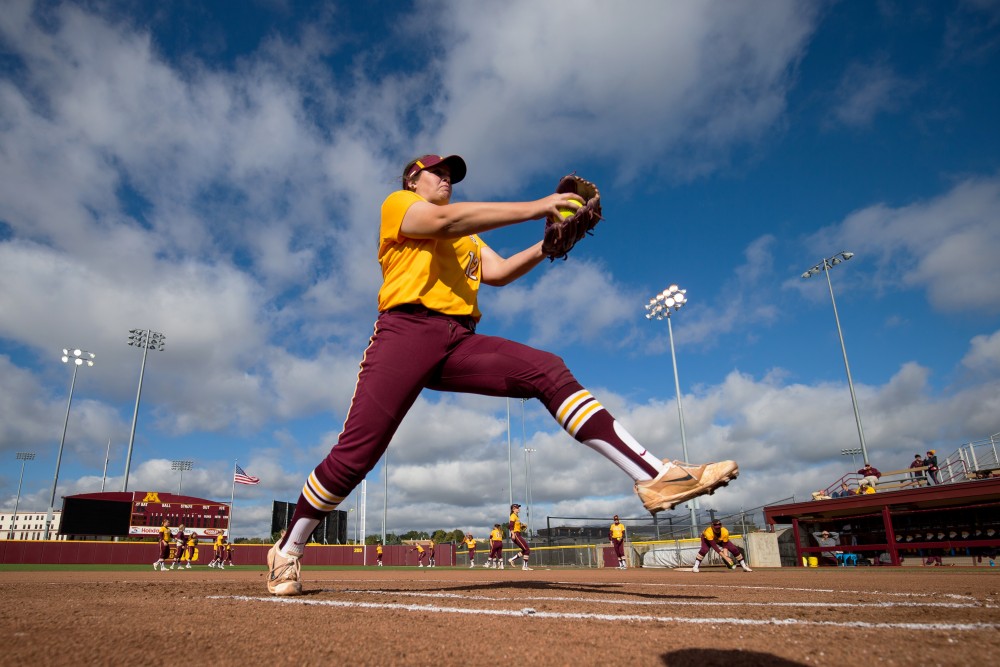 Pitcher Sydney Smith warms up before a game on October 7, 2017.

University of Minnesota pitcher Sydney Smith is well-traveled with trips abroad and across the country.

Smith just recorded her third victory with the Gophers in the series finale Sunday over Iowa, clinching a sweep for the weekend. For Smith, it was a long journey to find herself pitching for Minnesota.

“Once I came on a visit to Minnesota, I realized that [it’s] the best place for me,” Smith said.

From going 54-1 on varsity at Maple Grove Senior High School to pitching at Louisiana State University, Smith is back in her home state, in what she said is a good fit for her.

“I think I just kind of outgrew my position at LSU and was … looking for something to challenge myself at a different university,” Smith said.

Smith left LSU after her sophomore year and was able to play immediately at the University this season as a junior.

“I think she’s adjusted really well,” sophomore pitcher Amber Fiser said. “Being able to come back last weekend, she just absolutely killed it. We needed that a lot and I know that she needed the confidence in herself.”

Moving different places is familiar territory for Smith. Before she took the more than 1,200-mile trek down to Baton Rouge, Louisiana for her two years at LSU, she and her family made an even bigger move. They moved to Brazil when she was in the first grade after her dad landed a job there.

“My dad wanted to try a new experience and see how far he could go in [his] work,” Smith said. “Just having that experience … and being able to say I’ve been in a different country and lived there and enjoyed it, not many people can say that — that shaped me into who I [am].”

Initially, Smith said the experience was different. She experienced a culture shock because she was so far from home, but the international school she attended taught in English while also teaching Brazil’s official language, Portuguese.

She came home after four years abroad, and then played softball for several years in the Twin Cities. After this, Smith moved to LSU and experienced the similar feeling of being in a place that wasn’t the same as home. Now, the junior is back in Minnesota and is thinking about her future beyond the softball field.

Smith is majoring in business and marketing education and has ideas for post-college life.

“I could see myself two places, either coaching … or probably somewhere in business consulting,” Smith said. “[Business consulting is] what I got brought into with my dad. He owns his own consulting company. It’s really cool to see how he could go in and change businesses and make them better than [what] they were.”

Smith acknowledged the similarities between both coaching and consulting. She said they revolve around sharing experiences to help others improve.

“Usually you’re hoping your upperclassmen can always contribute and help your younger players,” Trachsel said. “I think the difference is that she has a different way of doing it, she’s very nonthreatening … a lot of them will gravitate towards her.”