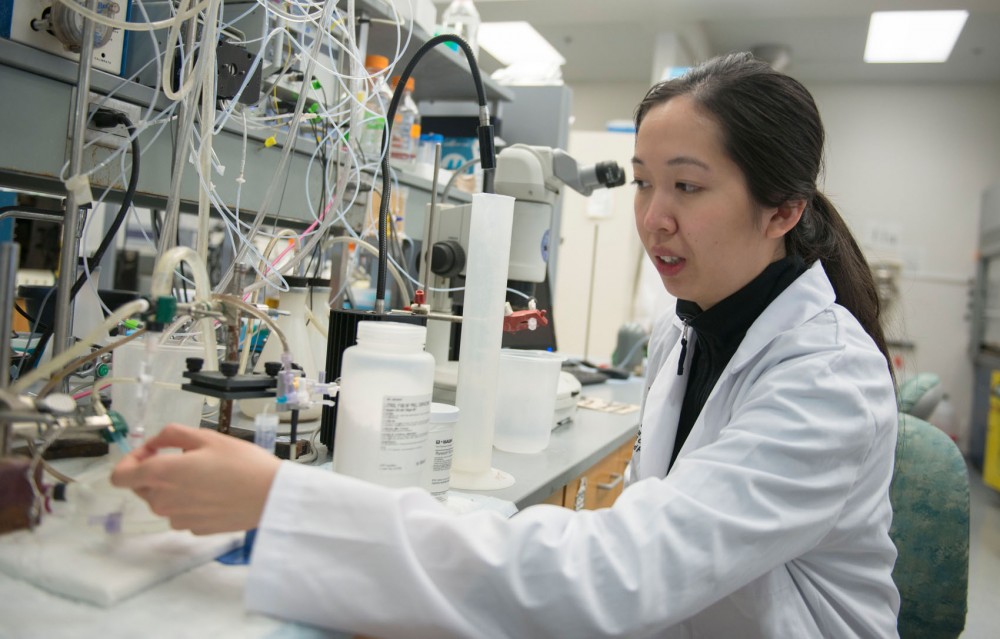 Research assistant and PhD candidate Evelyne Houang shows the laboratory equipment used to do testing with polaxamers in a laboratory at Nils Hasselmo Hall on Saturday, Mar 1, 2014. They have found that polaxamers can repair tears in the muscle cell membranes.

Maxx Kirley, 12, gets so exhausted walking across his school that he can’t participate in gym class once he gets there. He has Duchenne muscular dystrophy, a disease that weakens his muscles.

But University research on certain poloxamers, named “molecular Band-Aids,” could provide a treatment option for Kirley. The groups of compounds can mend muscle cells with no side effects.

University researchers are trying to apply these molecular Band-Aids to muscular dystrophy and heart disease, and are planning to start a clinical trial once they decide on the best version of the molecule to use.

Without the protein, muscles deteriorate over time and even walking is strenuous, he said. The disease can lead to damage in almost every body system, and the life expectancy of a patient is about 20 years.

“He, first and foremost, is just a 12-year-old boy,” Maxx’s mother Terri Kirley said. “He’s very smart, he’s a student and he wants to go to college someday.”

Without dystrophin, muscle cell membranes can break. And without a sturdy membrane, damaging enzymes can leak into or out of cells.

Poloxamers were initially created for industrial use as a molecule similar to plastic. The transition to research on molecular Band-Aids began in the early 2000s, Houang said. The University entered the research about eight years ago.

Any treatment for Duchenne muscular dystrophy is a step up from a couple decades ago when there was no treatment available, Karachunski said.

Currently, the disease is most often treated with steroids.

Steroid treatment has many side effects, however, like stunted growth, higher blood sugar, weakened bones or behavioral problems — all of which call for medication on their own, Karachunski said.

“It can just make everything that you’re already dealing with way more stressful,” Terri Kirley said.

Maxx Kirley takes steroids to help with his disease, Terri Kirley said. He hasn’t been treated with molecular Band-Aids, but is part of a couple of other clinical research trials at the University. They would participate in a clinical trial for molecular Band-Aids if they were able to, she said.

One of the main advantages of molecular Band-Aids, Houang said, is that they don’t appear to have any side effects.

The U.S. Food and Drug Administration approved one University molecular Band-Aid clinical trial for patients with heart disease, but it failed because of problems with timing the treatment.

The researchers learned that the treatment is only effective if it’s administered to cardiac muscles right after a heart attack. They also learned that treatment for Duchenne muscular dystrophy would only be effective if patients took doses daily, Houang said, similar to insulin for diabetic patients.

Right now, the research team’s main focus is creating the ideal molecule for treating these diseases. Once optimized, Houang said, the drug could help treat other diseases.

“The most important part for us right now is to understand how it works,” Houang said. “And then, when we know how it works, and we know what the optimal structure is that we want to move ahead with, then we will go through the whole process of trials.”

Molecular Band-Aids are not a cure for Duchenne muscular dystrophy, Houang said, but a treatment to help cells repair themselves and to help avoid damage to other parts of the body.

Terri Kirley said she hopes the FDA will be able to approve more new treatments soon.