Coming soon to the Twin Cities art scene: The art of skating

The Minneapolis X Games will celebrate action sports and art — together 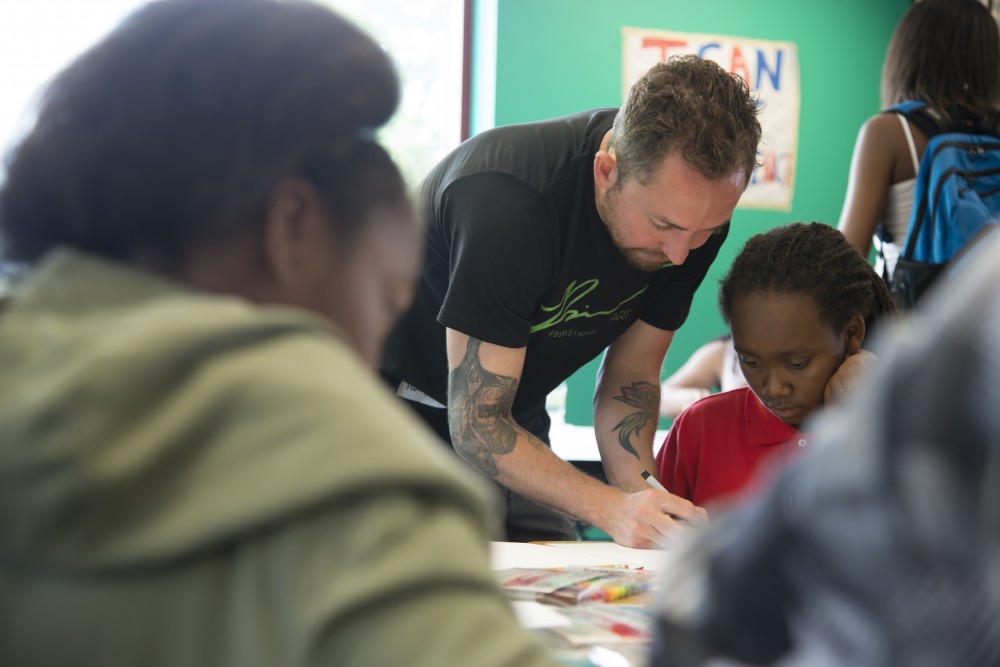 Mark Rivard instructs children how to draw during a workshop on Tuesday, July 11, 2017 at the Harold Mezile North Community YMCA Youth & Teen Enrichment Center. The visual artist runs workshops locally and abroad to inspire children to follow their dreams through experiential learning that points toward art.

The X Games will soon bring skateboarding, BMX and Moto X events to the Twin Cities, but art will also come with these staples.

Mark Rivard, a local skateboard artist, will take part in one of a handful of featured art installations at the Games. The exhibits will showcase a student-created skateboard art gallery and let visitors create their own board designs.

While Rivard uses skateboard decks as canvases for his Sharpie creations, he said connections between the art and skateboarding worlds expand past the board-as-blank-page.

“Action sports in general — whether in Minneapolis or anywhere in the world — are some of the very few physical activities that bridge arts and culture with athletics,” Rivard said.

After helping city planning teams “pitch” Minneapolis to ESPN for the X Games, he said the local art scene was a key reason the Twin Cities were chosen as the Games’ summer 2017 host. The area’s music and art scene gave the Games a space to share new stories.

“Here in Minneapolis, that’s kind of number one,” he said. “I think we value our culture more than our sporting events.”

In addition to the physical art installations, Rivard said there will be another form of art on display: the skateboarders themselves.

Because it’s an individual sport, the ability to create a personal brand and aesthetic is important in skateboarding.

“Your board certainly tells a story,” he said. “The art on your board, the brand that you’re skating — it all kind of plays into your personality.”

“Most people that identify as a skateboarder probably would identify themselves more as artists than as athletes,” he said.

“I think you can look at skateboarding in two ways: [as] a sport and [as] an art,” Torgerson said. “You get to choose what you do and how you do it.”

A street skater, he said he loves the ability to create a picture in his mind, practice what he envisions and work toward mastering those tricks and runs.

In addition to the act of skating itself, Torgerson plays with the graphic side of the sport.

“Being from Minnesota, I’ve pretty much exhausted every Minnesotan graphic I can think of. From loons to lakes to the northern lights.”

Whether in a skater’s board, fashion or actual skating ability and style, art is deeply embedded in skateboarding as a whole.

Rivard said this makes the culture something everyone can enjoy.

“I think that even if you’re not a fan of the athletic side of it, this is a cultural festival,” Rivard said.

“I think that’s important to bring to the forefront. It’s all about an entire culture of people that comes together.”