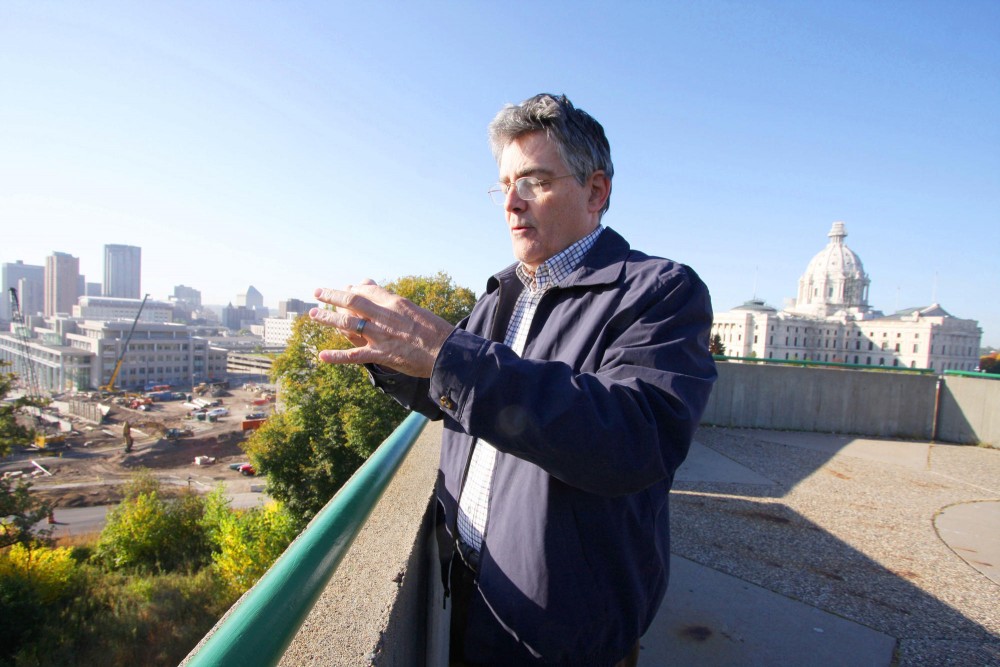 Local author and historian, Larry Millet, describes the area around downtown St. Paul on Monday. Many large estates in the region were lost to urban development.

Mansions werenâÄôt always a staple of Disney theme parks or hideouts for Hollywood celebrities âÄî they were visible landmarks within cities. Skyscrapers and commercial buildings now stand over the graves of hundreds of 19th- and 20th-century mansions in Minneapolis and St. Paul.

âÄú[Mansions] tell you a lot about the lifestyles of the rich and famous a hundred years ago,âÄù said Millett.

In âÄúCastles,âÄù Millett poetically weaves social and family history with countless photos and sketches of affluent familiesâÄô ritzy abodes. The accounts are like 19th-century âÄúCribs,âÄù without the arrogance or slanting camera angles.

Still, famous Minnesota dynasties yearned for excess as much as any NBA star on an MTV reality show.

Mansions usually represented an individualâÄôs lofty desire, and when the financier passed on, the family would often desert the one-of-a-kind house.

Titans like William Washburn amassed a fortune in flour and lumber business ventures. One of the wealthiest Minnesotans in the late 19th century, he built his âÄúFair OaksâÄú mansion in 1883 close to where the Minneapolis Institute of Arts. now resides.

But in a time of rapid industrialization, these deluxe homes often led fleeting lives. Twelve years following WashburnâÄôs death in 1912, the mogulâÄôs mansion was destroyed, along with his artificial pond, footbridge, greenhouse and carriage house on the sprawling lawn.

The former land is now part of the National Register of Historic Places. Named the Washburn-Fair Oaks Mansion District, it includes homes like the Tudor revival style mansion of Charles S. Pillsbury.

DowntownâÄôs rapid expansion is partly to blame for the periodâÄôs neglect for architecture. A large house in the heart of Minneapolis around 1880s simply wouldnâÄôt last.

âÄúAmerican cities are famous for change,âÄù said Millett. âÄúYou go to parts of downtown Minneapolis and itâÄôs already the sixth building on that particular site.âÄù

Sites for mansions also became investment properties. Builders claimed valuable land with the knowledge that they could make easy money.

Millett laments the difficulty in preserving historic places in the U.S.. Urban expansion continues to supplant mansions. The Pillsbury house was built in 1963 and torn down in 1997.

âÄúItâÄôs the nature of our economic system which depends on renewal âÄî tearing things up and starting over again,âÄù said Millett.

âÄúCastlesâÄù acts as a companion to MillettâÄôs extensively researched 1992 book, âÄúLost Twin Cities.âÄù The magnum opus chronicles a wider range of disappeared architectural marvels and even spawned a special on PBS.

Personally witnessing many of these housesâÄô downfalls within his lifetime, Millett is used to the fluctuating landscape of urban renewal. One of the greatest losses, Millett admits, would be the John Merriam house.

The site near the state capitol in St. Paul once belonged to the Science Museum in the 1930s. Shortly after the State of Minnesota acquired the land, the home was torn down in 1964 to make way for an administration building.

Millet said, âÄúA lot of people in St. Paul would agree [it was] the most splendid of the 19th-century mansions.âÄù