The Gophers will play on the National Hockey Center’s Olympic-sized sheet of ice. 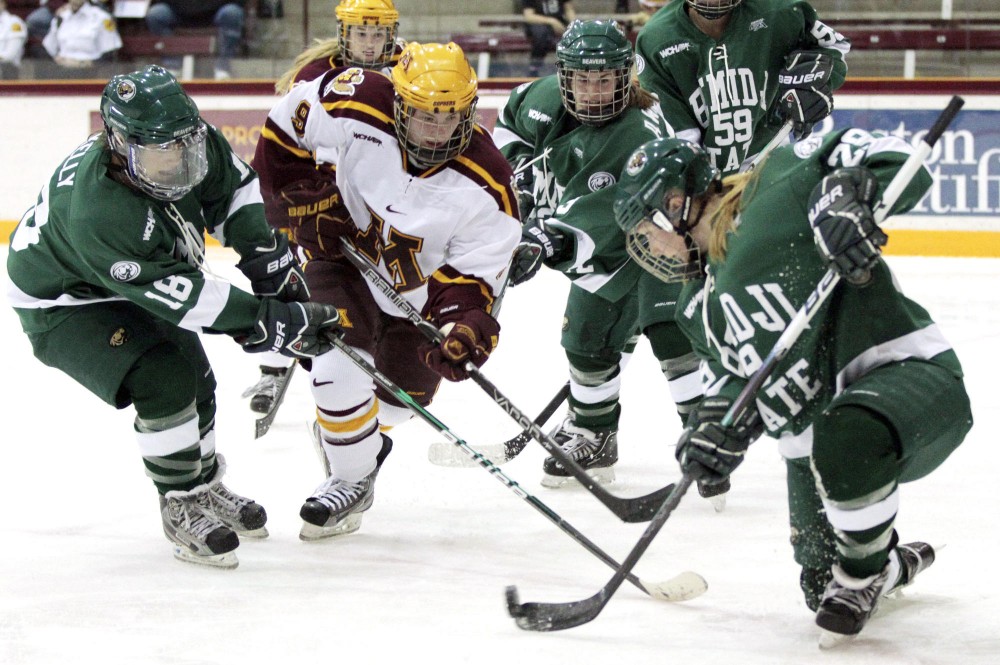 Minnesota forward Sarah Davis fights for the puck against Bemidji State on Jan. 20 at Ridder Arena.

That means three weekends to make corrections and fine-tune minor problems before the pressure mounts and the games really count.

And although the WCHA and NCAA tournaments are on the horizon, the No. 2 Gophers must first take care of the rest of their schedule.

First up is lowly St. Cloud State. Even âÄúlowlyâÄù might be too much praise.

The Huskies (5-21-2, 4-18-0 WCHA) are anemic offensively, and their defense is more porous than SpongeBob SquarePants.

SCSU is last in the conference both in goals scored and goals allowed. The Huskies have found the back of the net just 37 times this season, 19 fewer than the next worst team (Minnesota State). Defensively, theyâÄôve given up 130 goals, 50 more than next-to-last Ohio State.

âÄúTheyâÄôre one of the teams that has been playing a lot better in the second half then they did in the first half,âÄù he said. âÄúTheyâÄôre a team thatâÄôs playing with a lot more confidence then they have been.âÄù

A moral victory against UMD, coupled with HuskiesâÄô home-ice advantage versus Minnesota certainly could jack up their confidence.

SCSU plays on an Olympic-sized rink at the National Hockey Center, and Minnesota skaters, who are accustomed to NHL-sized Ridder Arena will have to adjust to the bigger playing surface.

âÄúItâÄôs always an adjustment to get used to that,âÄù defenseman Kelly Seeler said.

The Gophers are practicing at Olympic-sized Mariucci Arena this week in preparation.

âÄúOur team is just so fast. Really just spreading the ice is the big thing we always talk about,âÄù Brausen said. âÄúYou really get a chance to open up the ice, and with a team that has as much talent and depth as ours, it really [gives us] an advantage there.âÄù

That talent and depth on the roster allowed Frost to fiddle with his lines last weekend.

Forward Emily West moved up to the first line against Minnesota State while Amanda Kessel moved to the second line, but Frost said he has no idea if those changes will stick this weekend.

Regardless of who is on the ice, the Gophers expect the HuskiesâÄô best effort.