The University distributed free tickets to every new student. 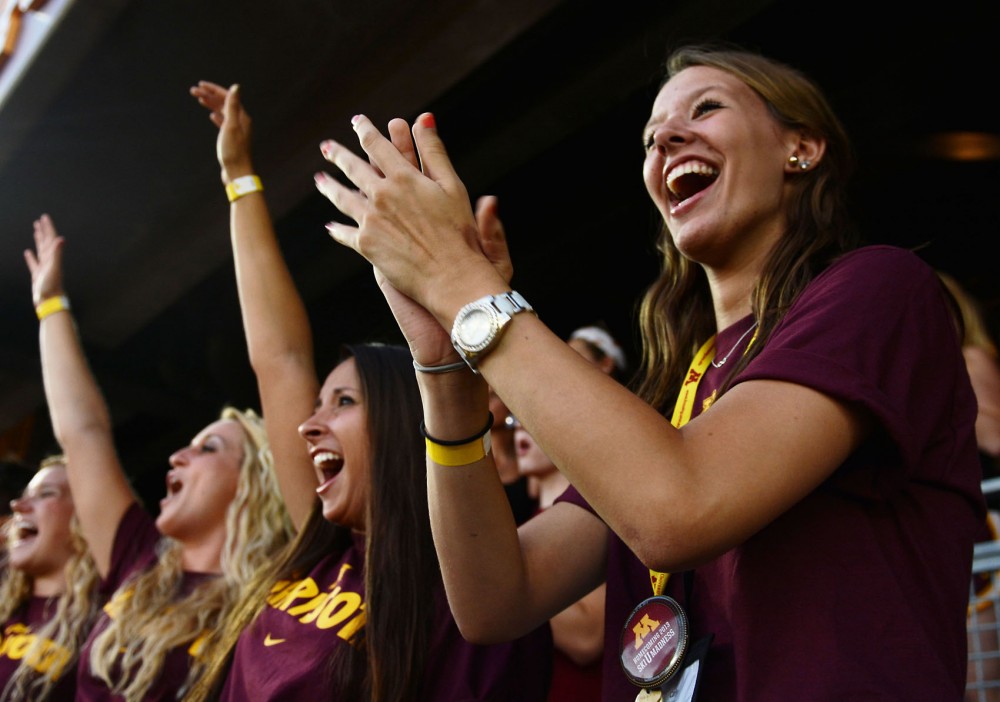 Freshman Carly Hubert, right, cheers for the Gophers at the first football game of the season against Nevada-Las Vegas at TCF Bank Stadium on Thursday night. Hubert was one of about 5,500 freshmen to receive free tickets to the game.

Ouellette, who has attended Gophers football games for about 10 years, cheered throughout the game and said she liked the Gophers’ spirit. She stood by her roommate, Wisconsin native Carly Hubert, who was attending her first Gophers game.

“I think [the game] is a good way to start our Gopher experience,” said Hubert, a College of Education and Human Development freshman.

Ouellette and Hubert were among the many freshmen who attended the game, which was part of the University’s Welcome Week program for the first time.  The University gave each of the new students a free ticket to the game and an $8 concession voucher for use at the event.

“The main goal is to introduce new students to Gopher athletics during their first week on campus,” University spokesman Steve Henneberry said.

Those students then witnessed the Gophers beat UNLV 51-23 in the team’s first season-opening home game since 2008.

“It’s definitely better than I expected,” he said.

Sanekommu said concession lines were long at the beginning of the game. He also spent about five minutes waiting in line for water during halftime. Coolers were distributed throughout the stadium, and the lines for them were consistently long.

To beat the heat, freshman Symone McClain and her friends sat near the back of the concourse during the third quarter. McClain had never been to a Gophers game but appeared impressed with the atmosphere. She came to the game with her roommate and two friends the pair had met earlier in the week.

McClain, who said she hopes to become a doctor, doesn’t have season tickets but said she will consider purchasing them after attending the first game of the season.

The student section appeared to be mostly full Thursday. The total announced attendance was 44,217.