Students go off the grid, into the cold

The idea was a way to promote Conservation Madness and its efforts to reduce electrical and material waste. 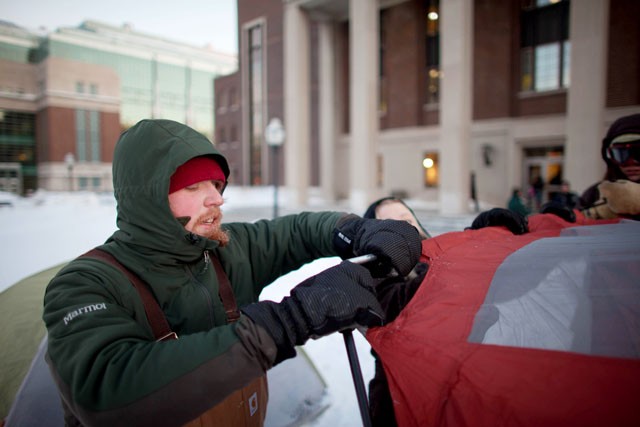 Monday was too cold for snowmen, too cold for tape to stick and too cold to sleep outdoors.
But seven students braved the below-zero wind chill and camped out to kick off Conservation Madness, a competition between dorms to see who can conserve the most energy.
The group, the Energy Efficiency Student Alliance held a campout in front of Coffman Union. EESA is a coalition formed with the Active Energy Club, MPIRG, Green Biz and Eco Watch.
The idea to âÄúgo off the gridâÄù was originally suggested by Chris Kelleher, a spokesman for Facilities Management. He was looking for a way to promote Conservation Madness and its efforts to reduce electrical and material waste.
By 4 p.m., a small tent had been set up on the lawn in front of Coffman. Stakes were prohibited because the lawn doubles as the Coffman BookstoreâÄôs roof. Instead, students had to get creative and pour water on the corners to keep the tent from blowing away.
More tents were to come later in the evening, but first, campers had to decide whether it would be warmer to use a few small tents or one 10-person tent.
The Minnesota Daily observed as the group battled boredom, broken zippers and harsh early morning winds. Here is a recount of their trials and tribulations.
5:07 p.m., Monday
The big tent/little tent debate finished with the decision to put up the big tent. But before the tent could be erected, the snow underneath needed to be packed down. This led to questioning.
âÄúHow big is the tent?âÄù
âÄúWhat shape is it?âÄù
Everyone tried to keep warm among the struggles of getting the tent up and stuck down without stakes (large clumps of snow were put in the corners to hold it down).
âÄúMy pants are frozen,âÄù said Chelsey Shoup, event coordinator for the EESA.
Around 6:30 p.m.
As the night wore on and the air got colder, passers-by looked on in amazement.
A man wished the group âÄúgood luckâÄù and walked away laughing.
Hungry, but wary of the cold, Shoup had to decide âÄúhow dirtyâÄù she wanted to be. The dilemma: should she reach in the bag of chips with or without her mitten. Decision made, she bravely took off her glove and reached in.
Leah Farchmin, a sophomore and neighbor of Shoup, joined in the evening to support Shoup and her efforts to help save energy.
Shoup and many of the students who camped out were also part of the Power Police, whose responsibility is to go into University of Minnesota buildings and help people find ways to save energy. They do this through power cords, reminding people to turn off lights and unplugging electronics not in use.
The Power Police are a facet of the UniversityâÄôs âÄúIt All Adds UpâÄù campaign to reduce energy usage by faculty, staff and students.
Through the campaign, Kelleher said last week, the University reached its goal of reducing campus energy consumption by 5 percent, saving approximately $2.25 million.
7:43 p.m.
With many on campus sitting in front of a computer screen or doing homework in a nice, warm apartment, the campers started feeling the chill. Needing something to keep their minds busy the group decided to throw around a football.
Meanwhile, the campers hatched a plot to congratulate bikers and walkers for being out in the cold as they passed by. That didnâÄôt last long, but the game of catch did the trick.
Shoup decided she was going to catch the ball while jumping off a snow mound that was built near the campsite.
8:50 p.m.
Mikey Weitekamp acquired fans: three female international students had stopped by hours previously.
The girls were amazed to see him still outside. Telling him heâÄôs âÄúa real man,âÄù they all took turns giving him a hug.
Weitekamp wore tan overalls and a green jacket. On his face, a moustache and goatee collected ice while trying to keep his chin warm.
While Weitekamp stood outside with his fans, Shoup, Farchim, Trent Iverson and Nick Kuczwarskyj headed inside Coffman and Comstock Hall to get snacks and warm up.
The forecast said it was 3 degrees above zero, but with the wind chill, it felt like 17 below.
9:23 p.m.
Drama struck the campsite when two of the three tent doors wouldnâÄôt zip.
Showing off their resourcefulness, the group decided to use a combination of safety pins, paper clips and extra wind screens to seal the doors shut.
âÄúInnovation,âÄù Shoup said.
âÄúExactly,âÄù Weitekamp responded.
Around 11:00 p.m.
Coffman closed, which meant toilet and heater access had been cut off. The group moved inside the tent for the night.
The tent was noticeably warmer than outside. The group settled in and placed one sleeping bag inside another.
Someone checked their phone. With wind chill, it felt like 1 degree outside.
âÄúWeâÄôre all happy in here, thatâÄôs all that matters,âÄù Kuczwarskyj said.
The group started to quiet down and by midnight, everyone was trying to sleep.
7:30 a.m., Tuesday
By morning, the group slowly began to trickle out, heading to class, or home to catch a few hours of sleep in a warm bed.
The consensus was that no one slept through the night. Around 2:30 a.m. the wind picked up, blowing in the sides of the tent and making it colder.
âÄúI had fun,âÄù Shoup said. âÄúIt was colder than I thought. The tent wasnâÄôt as good as I had hoped, but I am glad we did it.âÄù
Looking forward to the future, Shoup said she would do it again, but pick a warmer day. Camper Anthony Kremin had a suggestion.
âÄúDid you hear itâÄôs supposed to be 36 on Friday?âÄù