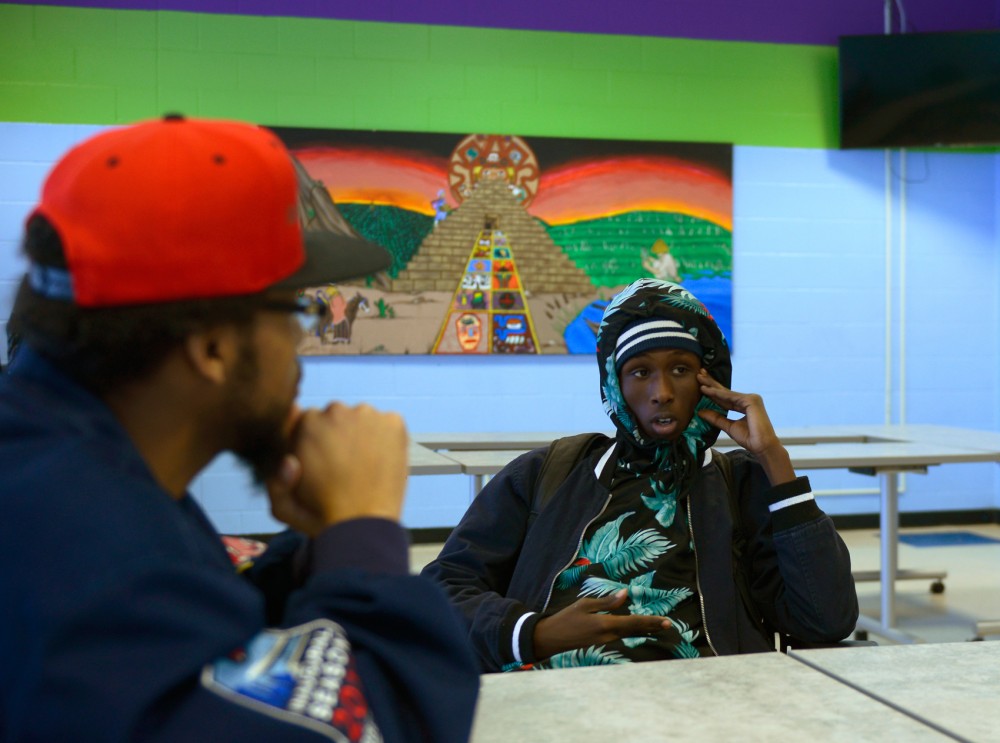 West Bank Community Coalition's youth and Young Adult Organizer Burhan Mohumed listens as Ayub Abdi explains why he decided to be part of the podcast at the Pillsbury United Communities' Brian Coyle Center Tuesday. Abdi said he was frustrated to the point where he had to speak out.

Olivia Johnson
A group of young Cedar-Riverside residents have created a platform to discuss some of the issues they face, from run-ins with police to finding jobs.
Last September, a group of young men joined the West Bank Community Coalition to start a new podcast that addresses youth issues in the neighborhood.
“We were just trying to get honest insight, honest input going about how to better our community,” said WBCC youth and young adult organizer Burhan Mohumed said.
The one-hour weekly podcast will release its first episode in the next two weeks, he said.
Mohamed Mohamed, WBCC’s executive director, helped to brainstorm for and eventually form the podcast.
“We want youth in the neighborhood to really feel empowered,” Mohamed said. “And give their voice to how the neighborhood changes and evolves.”
The podcast’s goal is to let local youth, ages 14 to 25, speak out about the challenges they may face in their daily life, Mohamed said.
“The mainstream media and … general people have misconceptions about the neighborhood,” Mohamed said. “We just really wanted youth to be able to speak on that.”
In the podcast, the six hosts describe what they like about the neighborhood, what they feel is missing and how organizations can help by providing resources, Mohamed said.
Mohamed said he wants to show young people how they can use organizations like WBCC to push for ideas that could benefit them.
Obsa Bule is a 23-year-old West Bank resident who spoke on the podcast’s first episode. Bule said he knows what youth in Cedar-Riverside go through, and he wants to help them through the same obstacles he faced.
The older generation in the area isn’t aware of problems younger people deal with, like trouble with the law, he said.
“The podcast is more into letting them know that the youth are going through this struggle,” Bule said, adding that younger people don’t always communicate with elders.
Bule said keeping young members of the community busy and involved is the best way for them to stay safe.
Mohumed said Abdulahi Awuni, a young resident who conceived the podcast in September, died in a shooting in November. Mohumed said Awuni contributed heavily to the start of the podcast.
Mixed Blood Theatre’s community coordinator, Faisal Mohamud, has lived in the West Bank community for about six years. While he hasn’t been on the podcast, he said he’d like to get involved with the forum.
Faisal Mohamud also volunteers at the Brian Coyle Center — which offers after-school tutoring and activities for kids — and attends local events in order to keep up with changes in the neighborhood.
“There’s a lot of issues in the neighborhood,” he said. “Your voice can do a lot of things. If you’re part of a big community, you can be involved in so many ways.”
Delete Image
Align Left
Align Center
Align Right
Align Left
Align Center
Delete Heading